Ready to Seal the Deal 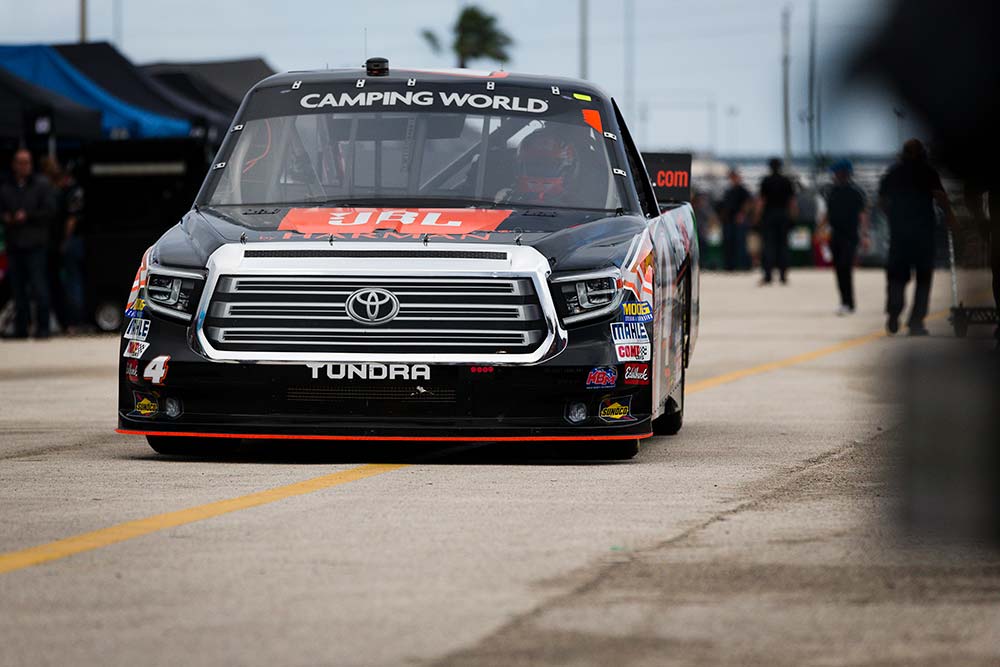 MOORESVILLE, N.C. (Feb. 28, 2017) – Christopher Bell could nearly taste victory in last year’s NASCAR Camping World Truck Series race at Atlanta Motor Speedway in Hampton, Ga., but instead ended up with a torn up JBL Tundra and a disappointing 26th-place finish after blowing a tire late in the race. He returns to the 1.54-mile quad-oval this year confident that he can bring home Kyle Busch Motorsports’ (KBM) its first-ever victory in the Peach State.

Bell finished inside the top three in two of the three practice sessions for last year’s 130-lap event and followed it up by qualifying third. He took the lead for the first time on lap seven and remained out front until pitting under green for a tire issue on lap 26. After going a lap down, Bell returned to the lead lap after taking a wave around on lap 37 and then began his march back towards the front of the field.

The Oklahoma native would lead again from lap 92 to 107 before overshooting his pit box under caution and exiting pit road in the fifth position. Bell was able to overcome adversity again and made his way to the front of the field with 14 laps remaining. He had opened up a lead of nearly one second with eight laps remaining when he blew a right-front tire exiting Turn 4 and slammed hard into the outside wall and then back down across the track before coming to rest in the infield grass.

With an eighth-place finish in the 2017 season-opener at Daytona (Fla.) International Speedway last week, Bell has now finished inside the top 10 in 15 of his last 17 Truck Series starts dating back to last June, including one win and seven top-five finishes. Over the last 17 races he has recorded an average finish of 6.9, compared to an average finish of 13.6 across his first 14 starts in NASCAR’s third division.

Now that the talented youngster has learned how to string together consistent finishes, he knows that next step in his progression as a driver is to win more races. Bell is confident based on last year’s near victory at Atlanta, Saturday is a race that he’s capable of putting the No. 4 JBL Tundra in victory lane. To do so he’ll likely have to outduel boss and mentor Kyle Busch, a four-time winner in the Truck Series at Atlanta, but the 22-year-old is confident that he can seal the deal this time around.

Are you looking forward to racing at Atlanta this weekend?

“Atlanta is one of my favorite tracks that we go to in the Camping World Truck Series. It is really worn out, so it races really slick. It is line dependent, so you have to make sure that you consistently hit your marks every lap. I was really fast there last year and so were all of my KBM teammates. Kyle (Busch) is going to be racing this year and I can’t wait to give him a run for his money.”

What is it like having to race against Kyle in the Truck Series?

“I think having Kyle in the race pushes all of us full-time Truck Series drivers to be better, especially his teammates, because you are only as good as the guys you race against. Whenever Kyle is entered in a truck race, you know you’re racing against the best and not only does it push me to be a better driver during the race, it really helps with our team debriefs because you know that you are getting feedback from one of the best drivers in all of NASCAR and that helps make all of the KBM Tundras better.”

With coming so close to getting a win there last year, do you head into this year’s race with extra confidence?

“Last year it looked like we had it all but won until we got a flat with seven to go. With Kyle and a couple other Cup drivers racing this time around it is going to be tough this year, but I feel like we have as good a shot as anybody to win on Saturday.”

Rudy Fugle, crew chief of the No. 4 JBL Toyota Tundra:

What are the keys to having a fast truck at Atlanta?

“It takes a little bit of everything to have a fast truck at Atlanta — that’s what is fun about it. It takes having raw speed, good mechanical grip — because the tires wear out and you have to be able to make them last — and you need really good aero grip to be able to race in traffic and make the downforce that you need to make the truck fast. We worked hard over the winter and I feel like we have our Tundras where they need to be so that we are able run up front and compete for the win this weekend.”

KBM-38: The No. 4 JBL Racing team will unload KBM-38 for Saturday’s Active Pest Control 200 at Atlanta Motor Speedway in Hampton, Ga. It is the same Tundra that William Byron won from the pole with in the 2016 Truck Series finale at Homestead-Miami (Fla.) Speedway.

Ryan “Rudy” Fugle begins his fourth season as a crew chief at KBM and sixth overall with the organization.  The New York native has guided his team to an Owner’s championship in all three of his seasons (2013, 2015 & 2016) atop the pit box at KBM, including a combined Owner’s/Driver’s Championship with Erik Jones in 2015. His drivers have combined for 16 wins, nine poles, 33 top-five and 53 top-10 finishes across his 69 races calling the shots for the organization. Under his tutelage last season, William Byron collected a Truck Series’ rookie record seven wins, three poles, 11 top-five and 16 top-10 finishes while leading the No. 9 Tundra team to KBM’s fourth consecutive and fifth overall Owner’s championship.

Fugle’s NCWTS drivers have registered an average starting position of 8.5 and an average finish 19.5 across two starts at Atlanta. Erik Jones delivered Fugle’s best finish at the 1.54-mile tri-oval, leading 37 laps and bringing home a seventh-place finish in the 2015 event.