Ready to Deliver Another Powerful Performance 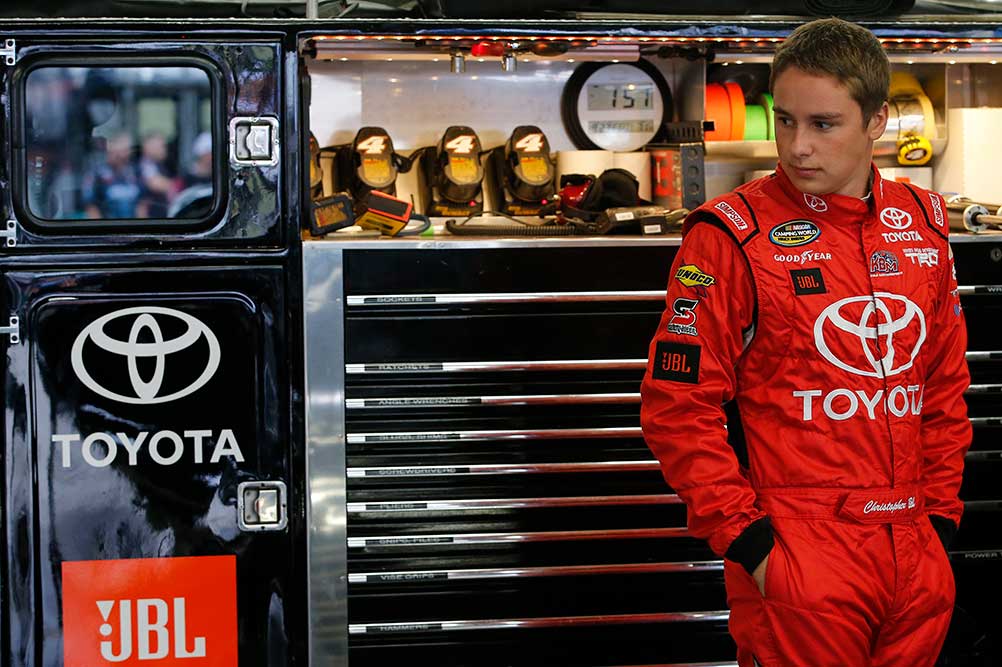 MOORESVILLE, N.C. (Sept. 27, 2016) – Christopher Bell and his No. 4 Kyle Busch Motorsports (KBM) team head to Las Vegas (Nev.) Motor Speedway for Saturday’s DC Solar 350 looking to feed off the energy from their runner-up finish last week at New Hampshire Motor Speedway in Loudon in the first race of the Round of 8 in the inaugural NASCAR Camping World Truck Series Chase. Bell will have race entitlement sponsor DC Solar – aclean energy company that specializes in mobile solar energy products designed for off-grid applications – onboard his Tundra for a one-race Truck Series partnership in Saturday’s 146-lap event at the 1.5-mile tri-oval.

While Saturday’s race will be the first time that DC Solar is partnering with Bell in the Truck Series, it’s not the first time they have been a part of his racing efforts. The California company sponsored the Oklahoma native’s No. 71 Toyota for four races during Indiana Midget Week in June. The talented wheelman rewarded them by parking his Keith Kunz Racing entry in victory lane at Bloomington (Ind.) Speedway on June 3.

With a runner-up finish at New Hampshire last week in the first race in the Round of 8 in the inaugural Chase, Bell enters this weekend’s race third in the championship standings and has a 10-point cushion on the cutoff line for advancing into the Round of 6. The 21-year-old driver comes into Las Vegas having delivered top-five finishes in each of the last three races and top-10 finishes in nine of the last 10 events.

Las Vegas was one of the seven races that Bell competed in during his part-time schedule in the Truck Series last season. His fifth-place qualifying effort was his best outside of the dirt race at Eldora. He ran inside the top five for the majority of the event as he posted an average running position of 6.77 and a driver rating of 97.1. He made it as high as the third position with just over 40 laps remaining and was running fourth with five laps to go when his crew knew they were just short on fuel but decided to gamble that they could make it to the end. With two laps to go his JBL Tundra ran out of fuel and after coasting down pit road for a splash of gas he returned to the track and ended up finishing 14th.

With being a full-time competitor and having earned a spot in the inaugural Truck Series Chase, Bell has much more riding on this year’s race at Las Vegas. He proved last week that he’s a serious contender for the championship and now he’s ready to deliver another powerful performance for new sponsor DC Solar.

Christopher Bell, driver of the No. 4 NCWTS DC Solar Tundra:

After a solid first race of the Chase, what is your outlook heading to Las Vegas?
“As we approach the final stretch of the season we are going to tracks that I raced at last year and it’s going to be very beneficial to me to already have experience at these tracks as I try to advance in the Chase. We had a really fast Tundra last year at Las Vegas and were running in the top five when we took a gamble on fuel and came up just a little short. Since that race, I’ve raced a lot more mile-and-a-half tracks and have a lot more confidence so I’m really looking forward to Saturday’s race. The mile-and-a-half tracks seem to suit my driving style because you can move around to try and find speed and pass people like you do when you’re racing on dirt.”

Does having a solid finish last week change your approach heading into the second race of the Round of 8?
“It definitely makes you feel a lot better, but it doesn’t really change our approach any. We’ll come into this weekend’s race with an upbeat attitude and that’s huge in racing because it’s 90 percent mental and it can help you perform better. We have DC Solar on our No. 4 Tundra this weekend and they are also the sponsor of the race, so we want to go out and have a strong run for them. I was able to go to victory lane with them on my Midget earlier this year at Bloomington Speedway during Indiana Midget Week and I’d like nothing more than to be celebrating with them again in victory lane Saturday night.”

This year’s race is going to start earlier than last year’s did. How will that affect the setup of your Tundra?
“When we practice during the day and then race at night, we have to adjust the trucks quite a bit to compensate for that. With this year’s race taking the green flag about 90 minutes earlier than last year’s the track conditions should be a little closer to what they were like when we practiced so we’ll be able to take less of a swing at the adjustments.”

Your team got off to a strong start in the Chase last week. Will that affect how you approach this race?
“We need to go out and do the same thing we did last week at New Hampshire — run up front, have an uneventful race and come away with a solid finish. I’m pretty fearful of Talladega being the final race in this round, so it’s going to make our lives a lot less stressful if we can go out this weekend and get locked into the next round with a win or have another top-five finish and be close to mathematically locked in heading into Talladega.”

KBM-39: The No. 4 DC Solar Racing team will unload KBM-39, for Saturday’s DC Solar 350 at Las Vegas (Nev.) Motor Speedway. Bell has posted two top-five and three top-10 finishes with the Tundra this season, including fourth-place finishes the last two times that he’s raced it, most recently at Chicagoland Speedway in Joliet, Ill.

Baxter’s Truck Series drivers have recorded two top-five and three top-10 finishes resulting in an average finish of 8.2 across four starts at Las Vegas. Darrell Wallace Jr., led a race-high 84 laps and earned a runner-up finish for Baxter in 2014.