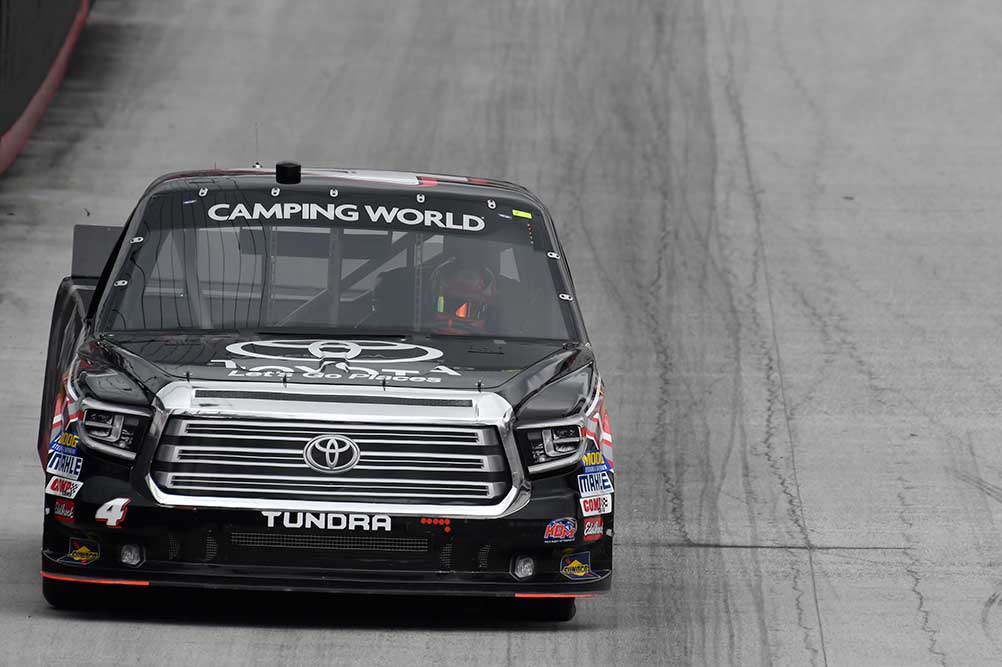 MOORESVILLE, N.C. (Aug. 29, 2017) – Christopher Bell and the No. 4 Toyota Racing team head to Canadian Tire Motorsport Park in Bowmanville, Ont. for Sunday’s 64-lap event at the 10-turn road course. With just two races remaining before the start of the playoffs, Bell will be looking to have a solid day and stay on course to winning the NASCAR Camping World Truck Series regular season championship and earning the much-coveted 15 playoff points.

The Oklahoma native will also be looking to make Canada the third different foreign country where he has visited victory lane. The open-wheel dirt standout was crowned the first-ever POWRi Lucas Oil Midget World Champion in 2013-2014. The 12-event competition featured four races in New Zealand, four in Australia and four in the United States. Bell got his first victory on foreign land in December of 2013 racing POWRi midgets in front of 13,000 fans on Boxing Day at Western Springs Speedway in New Zealand. He then went on to win the final night of racing in Australia at Lismore Speedway and captured wins at three of the four races on American soil to bring home the World Championship.

Sunday’s event will mark the 22-year old’s third overall start at Canadian Tire Motorsport Park and his second in the Truck Series. In last year’s Truck Series race, he had to start from the back of the field after having to make repairs due to an accident in qualifying. Bell ended up spending 54 of the race’s 66 laps inside the top 15, made his way as high as the runner-up position and brought home a fifth-place finish.

In order to prepare for this year’s Truck Series race, Bell made the pilgrimage north of the border in May to race in the NASCAR Pinty’s Series race. He started from the 10th position and under wet track conditions made his way up to the seventh position in the early stages before pitting during the first caution. He restarted 16th on lap eight and once again drove back inside the top 10, at one time posting the second-fastest lap of the race, before coming to rest on the track just before the halfway mark of the 51-lap race with a transmission issue. He was able to get back on the track late in the race while it was raining and gained more experience at the 10-turn track.

With four Truck Series wins already under his belt in 2017 and a 42-point lead over Johnny Sauter in the regular season standings, Bell is focused on winning this weekend at Canadian Tire Motorsport Park. The talented wheelman is ready to conquer Canada and make it the third foreign country where he’s visited victory lane.

What would winning at a road course this weekend mean to you?

“It would be really cool to win on a road course because they are really tough to win at, but for me personally I think the biggest thing would be being able to win a race in Canada. I’ve won a race in every country that I’ve raced in now except Canada, so if I could win in Canada that would be pretty special to me.”

Will racing in the XFINITY Series at Road America last weekend be beneficial to you this weekend at Canada?

“Road America in the XFINITY Series car was a longer track with a lot of stop-and-go corners, where Canada is shorter and more flowy. With it being more flowy and now having two races of experience at Canada, I think it’ll be easier to get into a rhythm this year than it was last year — especially just coming out of another really tough road course.”

Will having a lead in the regular season point standings affect your strategy this weekend?

“We are in a bit of a tricky situation with the point standings because Canada is a place where you can very easily give up stage points to try and put yourself in a better position to win the race. So, we are going to have to evaluate ourselves after practice and qualifying to see if our speed is capable of winning the race and if it is, we will sacrifice the stage points because our ultimate goal is to win the race. If we don’t quite have the speed to win the race, then we are going to have to do our best to maximize the stage points and have a solid points day.”

KBM-X134: The No. 4 Toyota Racing team will unload KBM-X134 for Sunday’s event at Canadian Tire Motorsport Park in Bowmanville, Ont. It is the same Tundra that Erik Jones led 19 laps with en route to victory in the 2015 event north of the border.

Ryan “Rudy” Fugle begins his fourth season as a crew chief at KBM and sixth overall with the organization.  The New York native has guided his team to an Owner’s championship in all three of his seasons (2013, 2015 & 2016) atop the pit box at KBM, including a combined Owner’s/Driver’s Championship with Erik Jones in 2015. His drivers have combined for 20 wins, 12 poles and 41 top-five finishes across his 82 races calling the shots for the organization. Under his tutelage last season, William Byron collected a Truck Series’ rookie record seven wins while leading the No. 9 Tundra team to KBM’s fourth consecutive and fifth overall Owner’s championship.
Fugle’s NCWTS drivers have posted one win, 19 laps led, two top-five and three top-10 finishes resulting in an average finish of 4.3 across three starts north of the border. Erik Jones led 19 laps en route to the victory in the 2015 event
Share this post
Share on FacebookShare on Facebook TweetShare on Twitter