Ready for Some Home Cooking 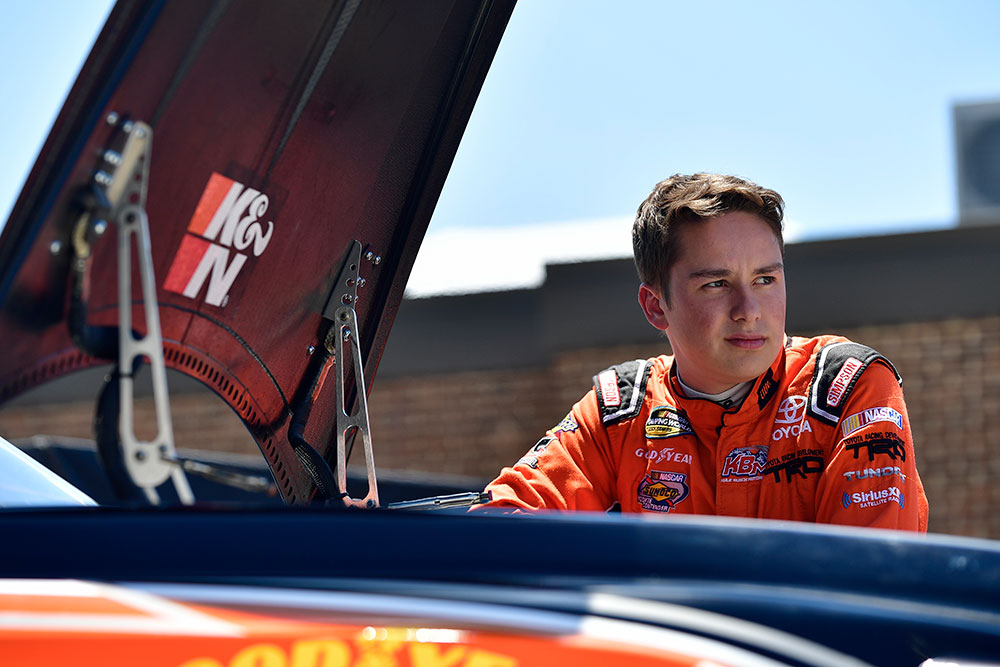 MOORESVILLE, N.C. (June 6, 2017) – After a tough day at the office there’s nothing like a little home cooking to make things better. Last week at Dover (Del.) International Speedway, Christopher Bell made an early exit from the race after cutting a tire and spinning into the wall. This week, Bell and the No. 4 JBL Tundra team head to Texas Motor Speedway (TMS) in Ft. Worth, the closest track on the circuit to his hometown of Norman, Okla., for Friday’s NASCAR Camping World Truck Series winstaronlinegaming.com 400.

Bell and the No. 4 team have been impressive on the mile-and-a-half tracks in 2017. He has captured the pole at all three events held at 1.5-mile venues this season, including Atlanta Motor Speedway in Hampton, Ga., where he won all three stages and led 99 of 130 laps en route to the victory. He followed it up by leading 37 laps and finishing fourth at Kansas Speedway in Kansas City and finishing third at Charlotte (N.C.) Motor Speedway. He also finished fourth at Charlotte in his NASCAR XFINITY Series debut for Joe Gibbs Racing.

The 22-year-old driver has always considered Texas one of his favorite tracks, not only because of the proximity to his hometown, but for the ability to move around the track to find speed, similar what he had to do growing up racing on dirt tracks in nearby Oklahoma. Bell has made three Truck Series starts in the Lone Star State to date, with a track-best finish of eighth coming in his first visit in November of 2015.

Friday night will be the first start for Bell on the fresh pavement at TMS. He did, however attend the NASCAR XFINITY Series race at the track back in April, shadowing the No. 18 team he went on to make his debut with at Charlotte. Fresh ingredients are a necessity for a good home-cooked meal and the talented wheelman is ready for some home cooking in Texas Friday night. Bell is hoping that his sneak peek at the track will help allow the No. 4 JBL Tundra team a leg up on the competition Friday night and bring home his second Truck Series victory of 2017 in front of his friends and family.

What type of racing do you expect to see with Texas having been repaved?

“On the repave I expect to see close racing, especially with the trucks because they draft so well. I think it will be tough to get away from people because of the draft runs, so we’ll need to make our JBL Tundra handle good in dirty air. Grip shouldn’t be an issue — there should be a lot of grip once the track gets rubber on it. It’ll be pretty slick when we first show up for practice, but then it’ll be gripped up come race time Friday night.

You went and watched the NASCAR Xfinity Series race in April. Anything that you learned from being there?

“It was super, super slick at the beginning of practice when the track didn’t have any rubber on it. That’s something we are going to have to think about when we show up and know that the track is going to go through a tremendous change from the start of the first practice until the start of the race and be prepared for that. I know that Rudy (Fugle, crew chief) is one of the best at having a plan in place for the adjustments between practice and the race, so I’m confident we’ll be ready to run up front and compete for the win come race time.”

What type of racing do you expect to see with Texas having been repaved?

“It will be a lot of unexpected – there isn’t much data to go off. Obviously, there was a Cup and XFINITY race there earlier this year, but there isn’t a lot of tire data or track data to look at. It is going to be a little bit of a mix, maybe like the Truck Series race at Kentucky last year. With the trucks being the only series laying down Goodyear rubber at Texas this weekend, it’s going to be really hard to get a lot of it down. It should be pretty treacherous and Christopher will have to take care of his truck all race and have a good, fast JBL Tundra at the end.”

KBM-38: The No. 4 JBL Racing team will unload KBM-38 for Friday night’s winstaronlinegaming.com 400 at Texas Motor Speedway in Ft. Worth. It is the same Tundra that Bell captured the pole and led 99 of 130 laps with en route to victory earlier this season at Atlanta Motor Speedway in Hampton, Ga. William Byron also won from the pole with the truck in the 2016 Truck Series finale at Homestead-Miami (Fla.) Speedway. In its most recent outing, Bell captured the pole and rallied back to a third-place finish at Charlotte (N.C.) Motor Speedway after and early tire issue.

Ryan “Rudy” Fugle begins his fourth season as a crew chief at KBM and sixth overall with the organization. The New York native has guided his team to an Owner’s championship in all three of his seasons (2013, 2015 & 2016) atop the pit box at KBM, including a combined Owner’s/Driver’s Championship with Erik Jones in 2015. His drivers have combined for 17 wins, 12 poles and 37 top-five finishes across his 74 races calling the shots for the organization. Under his tutelage last season, William Byron collected a Truck Series’ rookie record seven wins while leading the No. 9 Tundra team to KBM’s fourth consecutive and fifth overall Owner’s championship.