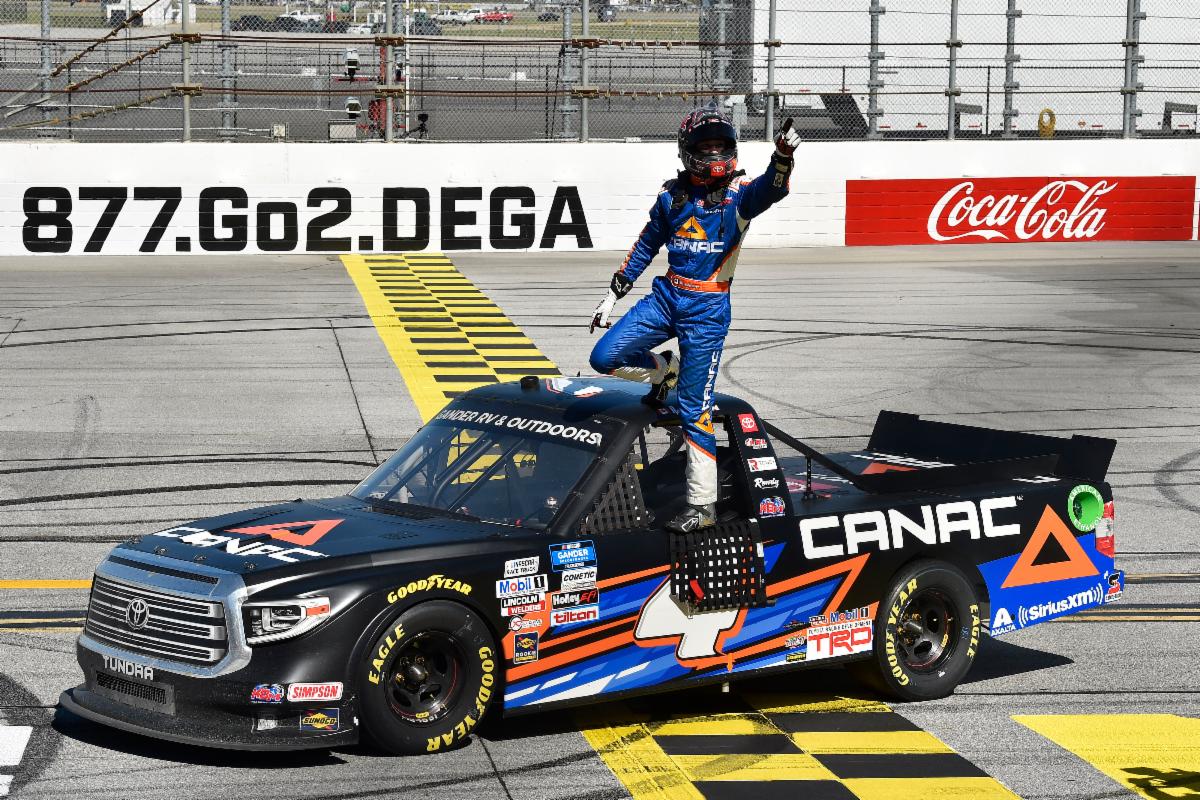 This was Lessard’s first victory and fifth top-10 finish of the 2020 season. The rookie driver currently sits 12th in points.

How does it feel to get your first Truck Series win?

“That was awesome. First of all, I want to thank everyone back home, my team at Kyle Busch Motorsports. CANAC came on board with us this year. Also, Mobil1, Toyota, TRD – this is amazing, I can’t believe it. It’s my second superspeedway race and to get my first truck series win here is amazing.”

What was the final lap like, and did you think you had won the race?

“I don’t know who was behind me, but he gave me a heck of a push and I can’t thank him enough because he’s part of that win too. He pushed me as hard as he could, and I was just holding on for the ride. Then the caution came out at the right time. I’m so happy. This was my first time doing a burnout from a race win and I loved it. Hopefully, we can do it some more.”

How were you able to get into position to win the race?

“All race long, my crew chief Mike Hillman Jr. gave me the best strategy ever. I was kind of getting tired riding out back. My teammates and I worked really well – Christian Eckes and Chandler Smith. I was just getting tired of it and I guess I listened to my crew chief, my team and I think we won it from listening to what my crew chief was telling me. At the end, we were in position to win it and all I was doing was trying to hold it straight and the guy behind me pushed me as much as he could.”

Did you feel you were ahead of Trevor Bayne when the caution came out?

“I thought I was close, but I was just focused in case we had another restart. In my head, it wasn’t done yet. We didn’t get to the start-finish line yet, so I thought it was going to be a green-white-checkered, but it didn’t happen, and we ended up winning.”

Lessard will be back behind the wheel of the No. 4 Tundra when the NASCAR Gander RV & Outdoors Truck Series resumes action on Saturday, Oct. 17, 2020, at Kansas Speedway in Kansas City. Live coverage of the Clean Harbors 200 will be on FOX, Motor Racing Network and SiriusXM at 4 p.m. ET.