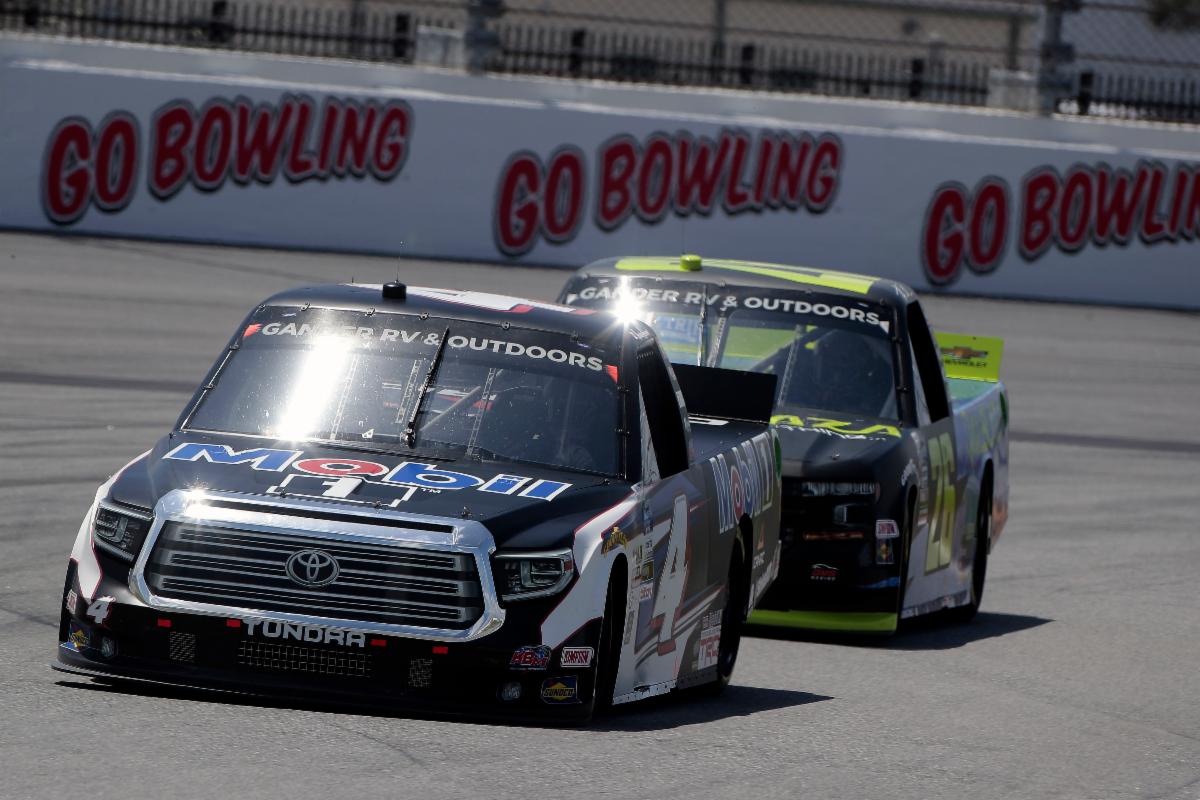 Lessard led three circuits in the opening laps of the Final Stage, but would lose the lead after missing the chicane on the frontstretch on Lap 30. The talented teenager would remain focused despite the mistake and in the end earned his first top-five finish in NASCAR’s third division.

Can you describe your race today?

“It was an awesome day for us. My Mobil 1 Toyota Tundra was awesome. Can’t thank everyone at Kyle Busch Motorsports enough. That’s what we’ve been working on all year, finishes like this. It hasn’t been easy for a rookie with all that’s going on, but I made a mistake when I was leading – pushed a little too hard. We never gave up and we fought back. It’s a little hotter here than Quebec, I can tell you that.”

“It was awesome. First of all, I want to thank my team, Kyle Busch Motorsports and my crew chief, Mike Hillman, Jr. We sat down before the race and studied some in-car from yesterday’s Xfinity race and I think it helped a ton. I learned a lot watching videos of on-boards from yesterday. The race was awesome. It was kind of a weird situation because no one has been here before in NASCAR and I felt like that’s what it’s been like for me every race so far this year. Being a rookie with no practice, every time I get into turn one, the first lap is a first for me. I think it was an advantage going into this race for me because I’m used to it and I can’t thank TRD for allowing us to go to the TRD simulator and practice on the road course. All of that made a big difference for me.”

How difficult was it to be racing for the lead and racing on a new circuit for the series?

“It was pretty difficult. I felt like in the lead, you had to push pretty hard to keep up with the guy behind you. One time I went a little bit harder than the lap before and with the heat on the tire and the brakes, I felt like it got a lot slicker there at the end and it kind of surprised me because I thought I was going to  be able to make the corner. I stopped really quick, came back and made a couple other mistakes, but we regrouped. We never gave up and just kept pushing hard at the end. Had a good strategy and that’s what it’s all about, just never giving up and keeping on working. I don’t think we could have had a shot at it at the end. The 2 (Sheldon Creed) truck was really fast. I think maybe, but I was trying to be a little bit conservative and trying to bring my Mobil 1 Toyota Tundra home.”

How were you able to combat the heat during the race?

“It was really hot. During the caution I asked for a bunch of water. I was just throwing water at myself, but TRD has a gym and I can’t thank everyone, my coach, Caitlyn, we all work really hard during the week in the gym to be good in those situations. Just trying to be ready physically and mentally and that’s what I was. At the end, I think it was the hottest I’ve been in a race car. We pushed through it.”

How much momentum do you have with this team after some strong runs lately?

“I feel like we’re a little bit on a roll now. We had a pretty good week last week in Michigan. I felt like Michigan we had a winning truck there, but we had two flat tires. Came back and now I feel like we had a winning truck again and we finished third. It’s just about working hard. I’ve been wanting those results since the beginning of the season and we just keep on working. I think it’s coming. We’re going to push hard. At Dover, I think with the new rules, we’re going to start pretty close to the front so that’s going to help us and especially that I’ve been there before. Last year was my second truck race there with Kyle Busch Motorsports. I think we’re ready. I love Dover, it’s awesome and track position is super important. It’s going to be good for sure.”

Do you feel you’re close to getting a victory?

“We’re a team capable of winning for sure, I feel like I’m doing everything I can. I’m studying video, I’m asking questions – Kyle Busch is helping a lot. It’s just a matter of time. We’re pushing hard for it. At this point of the season, we’re not going for stage points, we’re going for the win. That’s what we’ve been doing the last few races and we’ve had our best finishes. We’re just going to keep on working and heading the right direction.”

What did you think of the performance by your teammate, Alex Tagliani?

“First of all, I want to apologize to him (Alex Tagliani) for the restart. It was pretty crazy. I don’t know if I spun him out, but I hit him pretty good in turn one because I got hit from behind on the one restart. I’ve been talking to him a lot and he was a good help the last few days. It was fun to speak a little bit of French because I moved to North Carolina and my family can’t come visit me at all this year so it’s been English, English, English. It’s good, it’s helping me. I think he did a good job. I was expecting to see him up front for sure because he is a super good road course racer and he’s got way more experience than me. I don’t know exactly where he finished, but good job to him.”

After 12 events, Lessard moved up to 13th in the NASCAR Gander RV & Outdoors Truck Series point standings. The rookie of the year candidate sits 191 tallies behind points leader Austin Hill

Lessard will be back behind the wheel of the No. 4 Tundra when the NASCAR Gander RV & Outdoors Truck Series resumes action on Friday, Aug. 21, 2020, at Dover International Speedway. Live coverage will be on FS1, Motor Racing Network and SiriusXM at 5 p.m. ET.