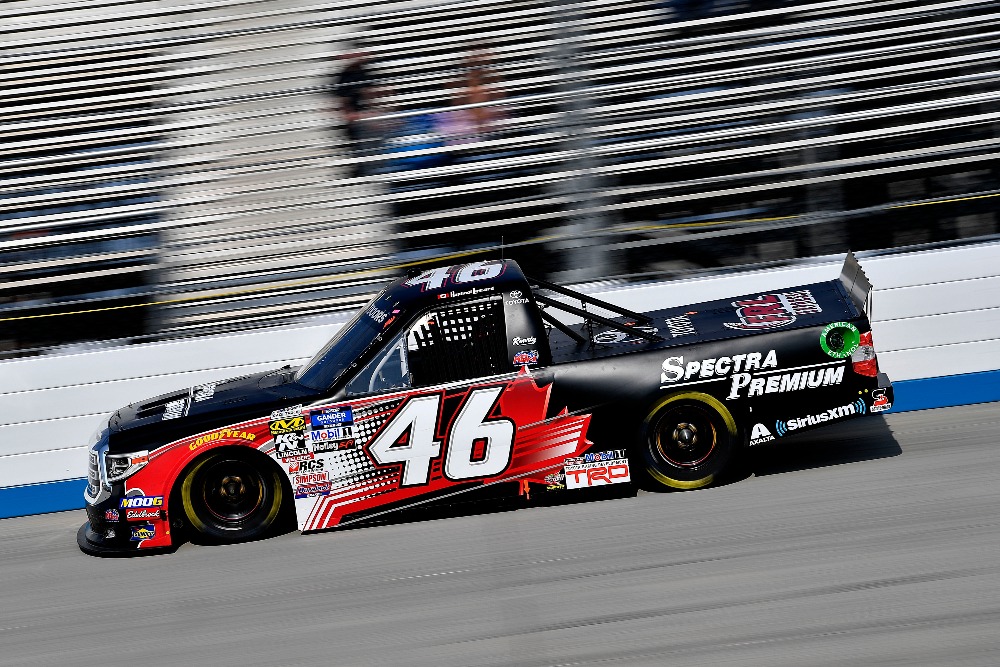 Friday’s result was an improvement of three spots from his 14th-place finish at Martinsville (Va.) Speedway in his Gander Trucks debut. Despite having never turned a lap in any series at the challenging concrete circuit, aptly named the Monster Mile, before Thursday’s practice session Lessard turned heads when he was fastest in opening practice and followed it up by finishing sixth in final practice. In Friday afternoon’s qualifying session, the talented teenager continued the momentum when he posted the fastest lap of the four Kyle Busch Motorsports (KBM) entered in the race and earned the seventh starting spot.

Lessard will be back in the No. 46 Spectra Premium/FRL Express Tundra Aug. 15 at Bristol (Tenn.) Motor Speedway for his final scheduled Gander Trucks start of 2019.

Raphael Lessard, driver of the No. 46 Spectra Premium/FRL Express Tundra for KBM:

“I think it went pretty well. Qualified well – qualified seventh. During the race it was just going to be a learning curve for me. I was in school — it was like my first day learning how to write it seems like, but I’m pretty happy for my first time here. We got my truck better in the race, but I was just fighting tight all race and when I would get behind another truck it would just get too tight. I got better and I learned a lot. I can’t thank everyone at Spectra Premium, Kyle Busch Motorsports and Toyota enough for the opportunity.”

Riley Herbst will be behind the wheel of the No. 46 Monster Energy/Advance Auto Parts Tundra when the NASCAR Gander Outdoors Truck Series resumes action May 10 at Kansas Speedway in Kansas City. Live coverage of the Digital-Ally 200 begins Friday at 8:30 p.m. ET on FS1.

Lessard’s final Gander Trucks race scheduled for 2019 in the No. 46 Spectra Premium Tundra will be Aug. 15 at Bristol (Tenn.) Motor Speedway.