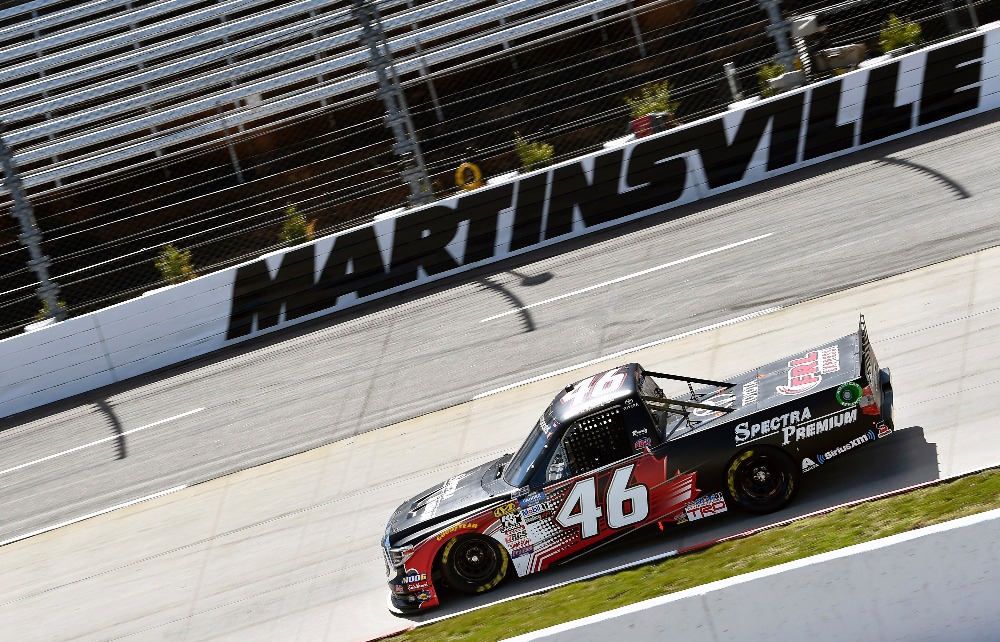 Making his NASCAR Gander Outdoors Truck Series (NGOTS) debut at Martinsville Speedway, 17-year-old Canadian driver Raphael Lessard had a realistic goal of completing all the laps and finishing the event with his Spectra Premium/FRL Express Tundra in one piece.

Lessard, a graduate of the Kyle Busch Motorsports (KBM) Super Late Model program, caught everyone’s attention on Friday when he finished both full-field practices ranked ninth among the 38 cars entered. The results came despite the fact that he had never made laps in a truck, was working with crew chief Michael Shelton for the first time and had never turned a lap at a the challenging .526-mile track in any type of vehicle. The talented teenager upped his game in Saturday morning’s qualifying session when he earned the seventh starting position for the 250-lap event.

Lessard got shuffled back a few spots on the initial start of the race and would end Stage 1 in the 10th position. After making the first pit stop of his Truck Series career, he was scored in the 11th position when the field took the green to start Stage Two.

During the final two stages, Lessard and the No. 46 team found it challenging to find the grip necessary to return to the top 10, but were able to register an average running position of 14.0 as Lessard kept the nose of his Spectra Premium/FRL Express Tundra clean, gained valuable seat time that will help him for his final two starts of his three-race schedule with KBM this season and at the end of the day posted a very respectable 14th-place finish in the race that was televised nationally on FOX.

How did your Truck Series debut go?

“I think it was pretty good. We qualified seventh — which was amazing for my first time. I was thinking that making the top 24 would be good. I just needed more grip everywhere. I had never seen the place before, didn’t know what to expect during the race, what the truck was going to do, how the pace was going to slow down and everything once the track got rubber on it. I was fighting for grip the whole race, but I’m happy. I would’ve like to finish inside the top 10, but this was good for my first race. Now it’s in the books and I’m going to focus on the next one with my Spectra Premium race team at Kyle Busch Motorsports.”

Lessard will be back behind the wheel of the No. 46 Spectra Premium/FRL Express Tundra May 3 at Dover (Del.) International Speedway. Live coverage of the JEGS 200 begins Friday at 5 p.m. ET on FS1.