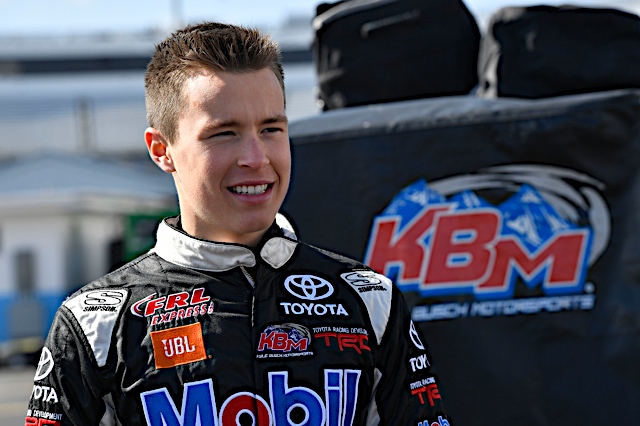 With already having experience in other series at Bristol, is this the most comfortable you’ve been going into a Gander Trucks race?

“Oh yeah — for sure. We went there last year with Kyle Busch Motorsports in a Super Late Model and we won. I ran the K&N race this year and I tested two days with the No. 4 team with Marcus Richmond — who will be my crew chief this week. We got along really well and I think he is going to be able to help me with all of his experience. I’m excited that for once I’m not racing at a race track that I don’t know in the Truck Series. I know this race track pretty well — it’s going to help me a lot. I’m excited and I think it’s going to be an awesome weekend.”

What has it been like racing limited schedules in a lot of different series?

“It’s been pretty good — I feel like I’ve learned a lot throughout the season racing different cars every week. I think that I’m going to be able to apply some things that I’ve learned in some of the cars that I’ve driven. If it’s a Late Model, a NASCAR Pinty’s, a NASCAR Truck, I’m going to be able to apply it this weekend. Hopefully we can get the Spectra Premium Toyota Tundra good and bring it to victory lane.”

KBM-52: The Spectra Premium/FRL Express team will unload KBM-52 for Thursday’s UNOH 200 at Bristol. The Tundra has an average finish of 7.0 across seven career starts, with a best result of second coming with Kyle Busch behind the wheel in its debut at Kansas Speedway in Kansas City in 2018. Todd Gilliland piloted this Toyota to a top-10 finish in all three of its starts in 2019, most recently finishing sixth at Chicagoland Speedway in Joliet, Ill.