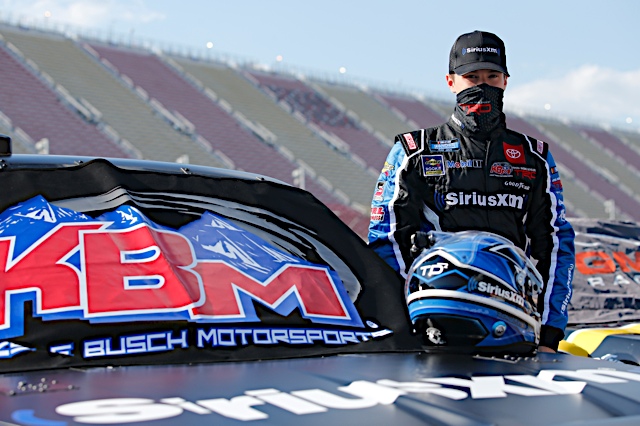 What does it mean to you to now be able to say that you are a winner in one of NASCAR’s top-three series?

“It really means the world to me. It’s a dream come true to be a winner in one of the top-three NASCAR series. We worked really hard to get to this point. I’ve worked hard. These past few years have been full of sacrifices. It finally paid off. We are going to keep on working even harder for the rest of the season. I am really excited for Kansas. I feel like we are going to have a good SiriusXM Toyota Tundra. We are going to try a new package. We are excited for it. We will see how it is on the first lap.”

After experiencing the thrill of victory at Talladega, does that motivate you and your team to go out and get more wins the rest of the season?

“Now that I know how it feels to win a race, I feel like we are going to need to win more because it is awesome. It’s a crazy feeling. It’s a dream come true. We are going to keep on working hard. I think it is going to motivate us to be even better and work harder for the rest of the season. I feel like my confidence is higher than ever. My team’s confidence in me and themselves is really good. We are going to have a good shot at Kansas. Hopefully we can get a lot of checkered flags, but that is the plan for the rest of the season to get to victory lane again.”

For most of the races this year, you’ve gone to a track for the first time without practice or qualifying. At Kansas, you’ve raced there twice already this season. How will that help you prepare for this Saturday’s race?

“We raced Kansas this summer. I don’t think the tires and our setup worked well together. We are trying something new this time. We will see if our package that we’ve been working on in the TRD simulator is going to be way better. The temperature is going to be different, so there is going to be a lot more grip. I’m excited to go back there. I know what the racetrack looks like. It’s an awesome place. You can run the top and the bottom. There are multiple grooves you can use. I’m excited. I love this racetrack even if we weren’t as good as we wanted, but we will get it this time. SiriusXM is on the truck. The SiriusXM colors look really good on the truck. It’s really fast. I’m really excited, so let’s go get another one!”

KBM-066: The No. 4 SiriusXM team will unload chassis number KBM-066, which has been raced twice. Most recently, Lessard piloted the chassis to a sixth-place finish earlier this season at Darlington (S.C.) Raceway