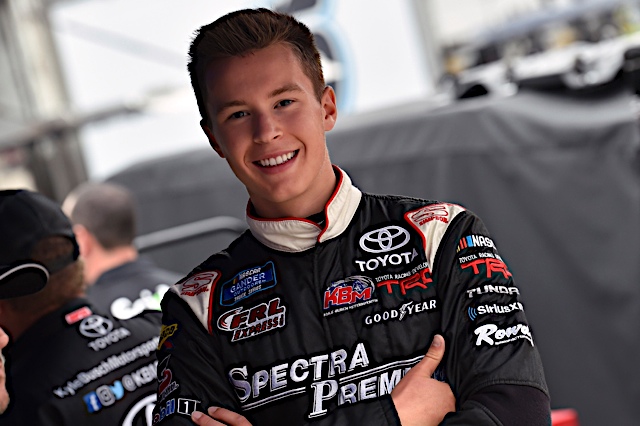 What are your thoughts on going to Daytona for the first time?

“It’s going to be a dream come true, for sure. Growing up, I watched races at Daytona, and I was like ‘Oh my God, I want to be there one day.’ Now it’s going to be my first time there and my first time on the race track so that’s really cool. And I’m just really thankful for the opportunity and to everyone back home, a big thanks to my family, Kyle Busch Motorsports, Toyota, JBL and Mobil 1 for all their support.”

Your team has a lot of experience at Daytona, so does that give you extra confidence?

“For sure. I know Mike has won there before, so he knows what he’s doing, and he’s got some advice to give me. I’m going to take as much advice as I can, from him, from Kyle. It’s a new style of racing for me. It’s a lot of drafting, aerodynamics and that sort of stuff. I’ve studied a lot of video and I think I’m ready. I think I’m at the point in my career, and you’ve got to do it at some point, so this weekend is going to be my time to race at Daytona, first time ever.”

What are your expectations for this year?

“I don’t have a lot of expectations. It’s my first year full-time in the Truck Series, and I don’t have that much experience in the Truck Series, but I’ve got five races under my belt and each race was better and better. My plan is just to keep getting better and focus 110 percent every time I go on the race track and learn a lot and I think if I do that, we’re going to have a great result.”

KBM-026: The No. 4 JBL team will unload chassis number KBM-026 for the season opener event at Daytona International Speedway. This chassis was used last year at both Daytona and Talladega with Harrison Burton recording an 11th-place finish at Talladega.