Racing for a Clock at Martinsville 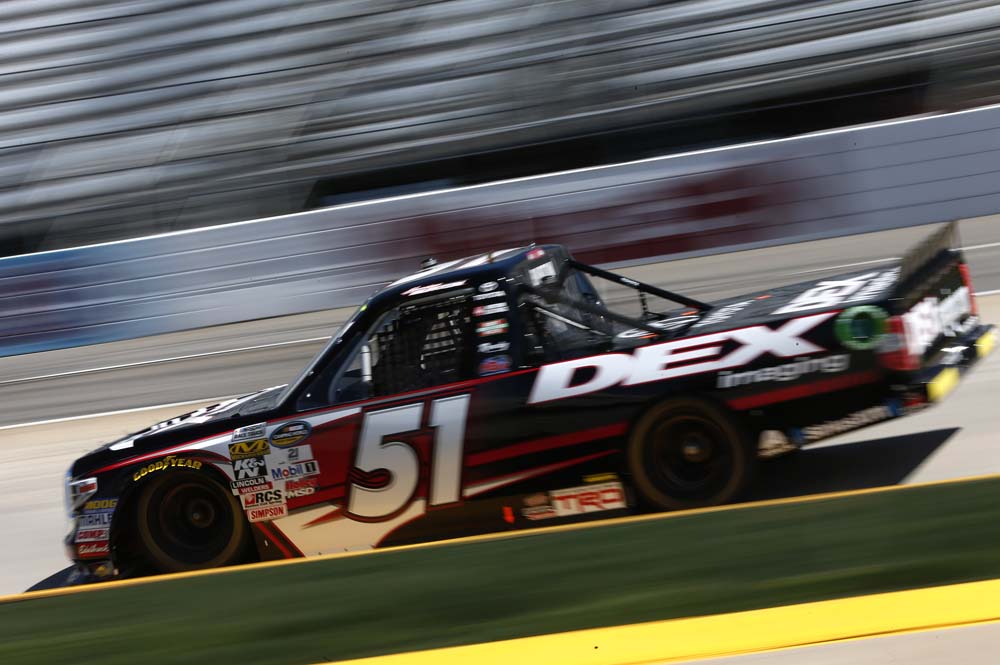 MOORESVILLE, N.C. (October 24, 2017) –  For the second time this season, Harrison Burton and the No. 51 DEX Imaging team will head north to “The Paperclip” for a weekend of short-track racing. Martinsville (Va.) Speedway is the only track on the NASCAR circuit that’s been there since the beginning in 1948. Drivers look forward to racing the 0.526-mile track in search of winning a famed Martinsville Grandfather Clock. One Grandfather Clock is already part of the Burton family as the rookie’s father and former Monster Energy NASCAR Cup Series driver, Jeff Burton, won at Martinsville in 1997.

Since the last time the youngest Burton was behind the No. 51 Tundra in the NASCAR Camping World Truck Series (NCWTS) back in August at Bristol (Tenn.) Motor Speedway, he’s added a championship title to his name. On Sept. 29, Burton earned the title of NASCAR K&N Pro Series East Champion after winning the final race of the season at Dover (Del.) International Speedway. Burton started the race in the third position and eight points behind the points leader, his Kyle Busch Motorsports (KBM) teammate, Todd Gilliland. After a stroke of misfortune for Gilliland, Burton led the last 18 laps of the race to win his first NASCAR championship.

As the rookie focuses on the race this weekend at Martinsville, he can lean on the two prior starts that he has under his belt at the track already. Burton made his Truck Series debut with KBM in October of 2016 at the Virginia track. After qualifying 17th, Burton maneuvered his way through the field and was running in the ninth position just past the halfway mark of the event when he was spun from behind and ended up losing a lap. He ended the event with a 22nd-place finish. Burton’s second start at Martinsville came earlier this season in his 2017 season debut in April. He started the race seventh and ran around in the top 10 for most of the race until once again he was spun from behind. When the checkered flag flew to end the race, Burton crossed the finish line 13th. The 17-year-old hopes to learn from his first two races at the track and apply it this weekend.

For Saturday’s race, Burton will once again don the colors of his sponsor DEX Imaging. DEX Imaging, based out of Tampa, Fla., is the nation’s largest independent provider of office technology with a local touch. Burton is thrilled to have them back on board his No. 51 Toyota Tundra for his last NCWTS race of the 2017 season.

Burton is excited to head back to “The Paperclip” for the third time. He’s confident that Saturday when the checkered flag waves, he will have a chance to take his No. 51 DEX Imaging Tundra to Victory Lane for the first time and bring home a Grandfather Clock to add to the Burton collection.

You raced at Martinsville earlier this season and finished 13th, what can you take from that race and apply it to this weekend?

“I can definitely take a lot from that race. I learned a lot about that race track when I was there and about how the trucks move around the track. Racing at Martinsville is a lot of fun. I think it’s kind of a unique style of racing than everywhere else. You have to block on a half-mile track and that can be a little tough. But, there is a lot that I learned and that I can take from the experience. I know that we ran better than 13th and had a good run for most of the race. I’m ready to get back there and prove myself and get it done in my DEX Imaging Tundra.”

This is your first race as the No. 51 crew chief, what are your goals for the rest of the season?

“First of all, I want to say how excited I am to be at Kyle Busch Motorsports. Everyone has been very welcoming and it’s an honor to be a part of one of the most elite teams in the Truck Series. We only have four races left in the season but I’m eager to get out there and get things done. We have some very talented rookies behind the wheel of the No. 51 and I’m looking forward to working with each of them.”

You have experience working with rookies in the Truck Series, what advice do you have for Harrison (Burton) going into Martinsville?

“Since this is Harrison’s third race at Martinsville, I think that he just needs to take what he knows about the track, learn from it and use it. He needs to be patient, he needs to keep the truck balanced and he needs to be there at the end. We have two practices on Friday to get the truck dialed in and comfortable for Harrison so that when Saturday comes, we will go out there and make the most of his last race of the season.”

Hillman Jr., has seven top-five and 10 top-10 finishes in 20 starts as a crew chief in the NCWTS at Martinsville.