Racing Deep in the Heart of Texas 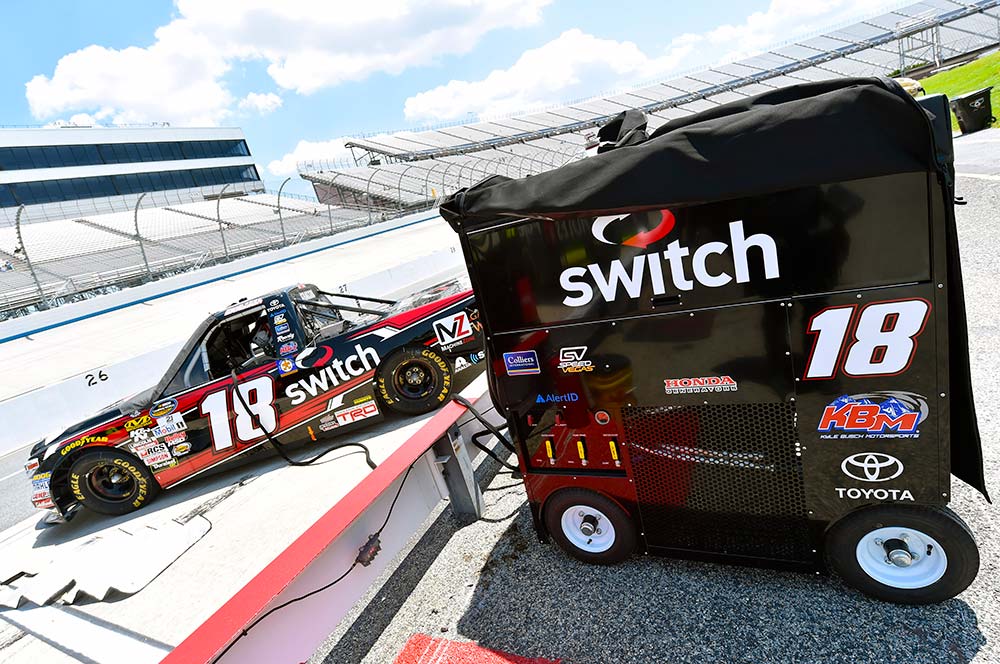 MOORESVILLE, N.C. (June 6, 2017) – George Strait sang about how the stars at night are big and bright deep in the heart of Texas. Friday night those stars might be less visible when the NASCAR Camping World Truck Series (NCWTS) races under the bright lights at Texas Motor Speedway. The stars everyone will be watching will be driving 180 mph around the newly paved mile-and-a-half track. Rookie contender Noah Gragson hopes to be an emerging star with a shot at leaving Victory Lane with a cowboy hat and trophy of his very own.

Although the 18-year-old has never raced at Texas before, he is coming off two consecutive top-10 finishes and is gaining confidence with each intermediate-track race. He fought his way to a ninth-place finish at Charlotte (N.C.) Motor Speedway last month, his first top 10 at an intermediate track. Learning the aerodynamics at that type of track has been a challenge for the rookie, but not one he cannot overcome. The way pit strategy played out at Charlotte, Gragson had the opportunity to gain valuable experience passing trucks. He was as far back as 18th at the start of the second stage, but made a remarkable comeback to finish the race ninth.

Kyle Busch Motorsports (KBM) has seen much success at Texas, winning four NCWTS races. Owner-driver Kyle Busch has collected two of his team’s wins (2010 and 2014), Erik Jones earned the victory in November 2015 and William Byron took the checkered flag in June 2016.  KBM Tundras have finished in the top 10 in 17 of the 29 races they entered and led 411 laps.

Gragson is looking forward to the race at Texas for another reason as well. Friday during pre-race ceremonies, he will be doing his graduation walk to celebrate the official end of his high school studies. Track president, Eddie Gossage will present Gragson with his diploma while he dons his cap and gown over his Switch firesuit. His parents, Scott and Jill, will be on hand as well as his sister, Addison (who attends Southern Methodist University in Dallas) and his grandparents.

Friday will be a big night for Gragson in Texas. He’ll start the evening on stage with a diploma in his hand and hopefully end the night with a trophy in his hand and a cowboy hat on his head in Victory Lane.

Talk about your expectations at Texas since it’s another intermediate track:

“Coming off of two top-10 finishes these last two races, I definitely have the confidence I need to run well. It’s basically a new race track with the new pavement and banking, so I’m just going to watch some replays of the Cup and XFINITY races earlier this year, and with IndyCar there the track will change with the different rubber as each series practices. I don’t really know what to expect other than its’ going to be very fast.”

Since owner Kyle Busch raced there in the spring, what did he tell you about the new surface and banking?

“He said to stay right on the bottom since the lane doesn’t really move up because it’s such new asphalt. There is a lot of grip once the rubber gets laid down. You are going to have to pass trucks coming up off the corner down the straightaways.”

You will be doing your high school graduation walk during pre-race ceremonies, are you excited?

“Having my graduation walk at Texas is going to be cool. A lot of my family is coming in for it, including my parents, grandparents and my sister who goes to college in Texas (SMU). She’s in a sorority, so I’m trying to convince her to bring all of her sorority sisters so I can have a good-looking cheering section in the stands. I passed all of my finals, so now I just have to get the diploma and move the tassel from one side of the cap to the other to make my high school graduation official. Only a select group of graduates wear their gown over a firesuit and have Eddie Gossage hand them a diploma, so I’m excited.”

How do you prepare for Texas with the new pavement and banking?

“We’re trying to prepare like we did when they repaved Kentucky and Kansas. We’ve experienced those races in the last few years, so we’ll just go off of those notes. KBM has run really well at the newly repaved tracks, so that’s what we are shooting for at Texas.”

What will you work on with the extra hour of practice?

“I’m not sure how much the extra hour will really help us since it will be so hot and it will take a while to lay some rubber down. We probably won’t run too much during the first one-hour practice, but then we’ll go at it pretty hard during the final two practices later in the evening.”

KBM-039: The No. 18 Switch team will race KBM-039, for Friday’s Windstaronlinegaming.com 400 at Texas Motor Speedway. This Tundra was raced seven times by Christopher Bell in 2016 with a best finish of fourth at Kentucky and Chicago. Gragson also raced it at Kansas this year where he finished 28th after clutch problems.

Richmond has one win, seven top-five and nine top-10 finishes in 20 starts as a NCWTS crew chief at Texas. He took the checkered flag with Ty Dillon behind the wheel in 2013.