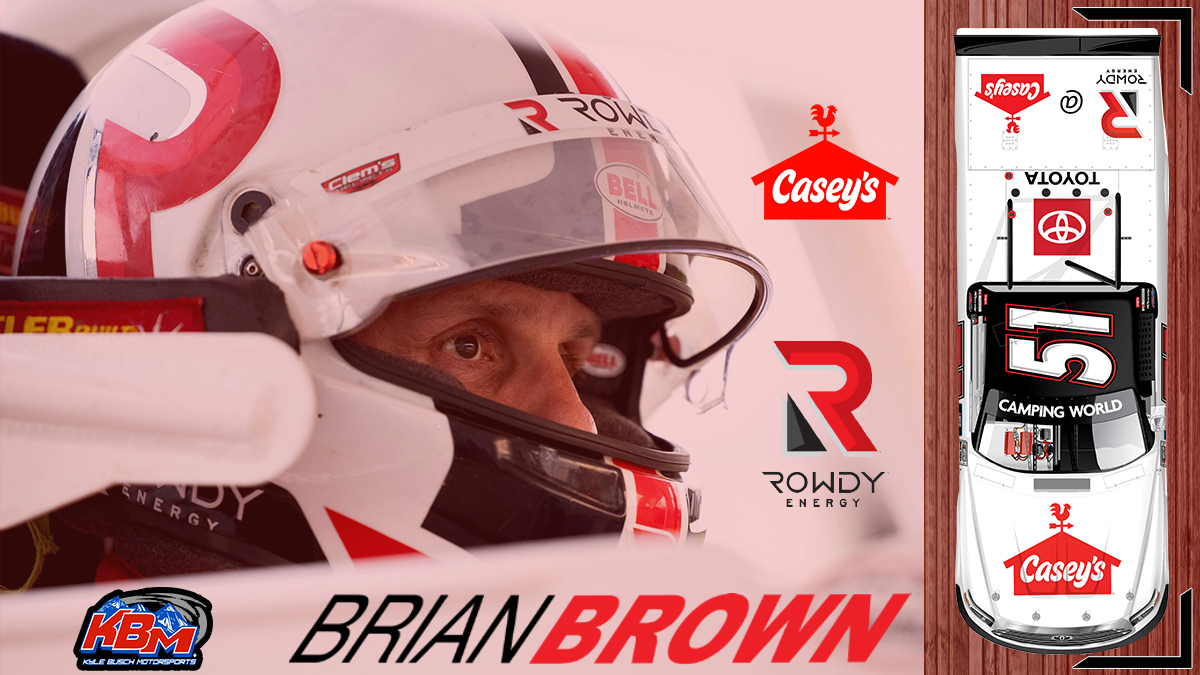 What Brown Can Do for You:

You’ve had a lot of success in sprint cars at Knoxville in your career. What does it mean to you to be getting this a chance to race in the Camping World Truck Series there?

“I’m excited for it, obviously we’ve had some success with the winged sprint car there, but until recently I’ve never run there with fenders. What a great opportunity with Casey’s and Rowdy on what I feel like is the best truck in the pits, the 51. It’s going to be a learning experience, but I’m looking forward to running all the laps and putting ourselves in a position to have a good finish at the end.”

How do you feel what you experienced running the SRX series at Knoxville will relate to running in the Truck Series there?

“I feel like running anything at Knoxville besides a sprint car is definitely going to help me. Something that heavy, that doesn’t really want to turn, and when it does want to turn it wants to spin out, all that is just different. Being able to run around 100 laps there with an SRX car, learning where to lift, where to pick up the throttle, they are similar, but they aren’t similar. The best way I can explain it is just doing something a little bit different. Everybody at KBM has welcomed me with open arms. Mardy (Lindley), the crew chief, has been phenomenal. From point A to point B where we’ve been so far has been just an awesome experience. Hopefully, we can get Casey’s and Rowdy and the Toyota Tundra 51 up in the front where it belongs.”

Have you set any goals going into the race?

“I talked to Mardy about it and mainly you have to finish all the laps, that’s the number one goal. If you’re three laps down, you’re not going to win the race. Try to finish all the laps and keep our nose clean. Obviously, Martin (Truex Jr.) had the fastest truck and won at Bristol in the same truck that I’m going to be driving, so I know the truck is going to be good enough. Hopefully, I can get in there during practice and adapt as best as I can, run all the laps and don’t damage the truck and then as the race progresses and I get more confident in the truck with what’s going on and adapting to the whole thing I feel like the sky is the limit to what we can do. I feel like we can very easily go in there and have a solid top-10 finish and if things go well compete for a top five and if things go really well compete for a win. There’s no, hey if we don’t do this, I’m going to be disappointed, I just want to run all the laps. That’s the key, don’t go in there and tear the truck up on lap 2 trying to be a hero. Run all the laps and have a good night. Just an awesome event for Knoxville and it’s going to be cool being a part of the inaugural event and having what will probably be a sellout crowd. It’s going to be awesome for not only the Camping World Truck Series, but also for Knoxville Raceway to maybe introduce some new fans to the dirt track community.

KBM-012: The No. 51 Casey’s/Rowdy Energy team will race KBM-012 for Friday’s Corn Belt 150. Martin Truex Jr. led a race-high 150 laps en route to his first career NASCAR Camping World Truck Series victory with this Tundra in March at the Bristol (Tenn.) Motor Speedway Dirt Track. Before being converted to a dirt truck, KBM-12 scored a victory with Erik Jones in 2014 at Iowa Speedway in Newton.