Put to the Test at Iowa 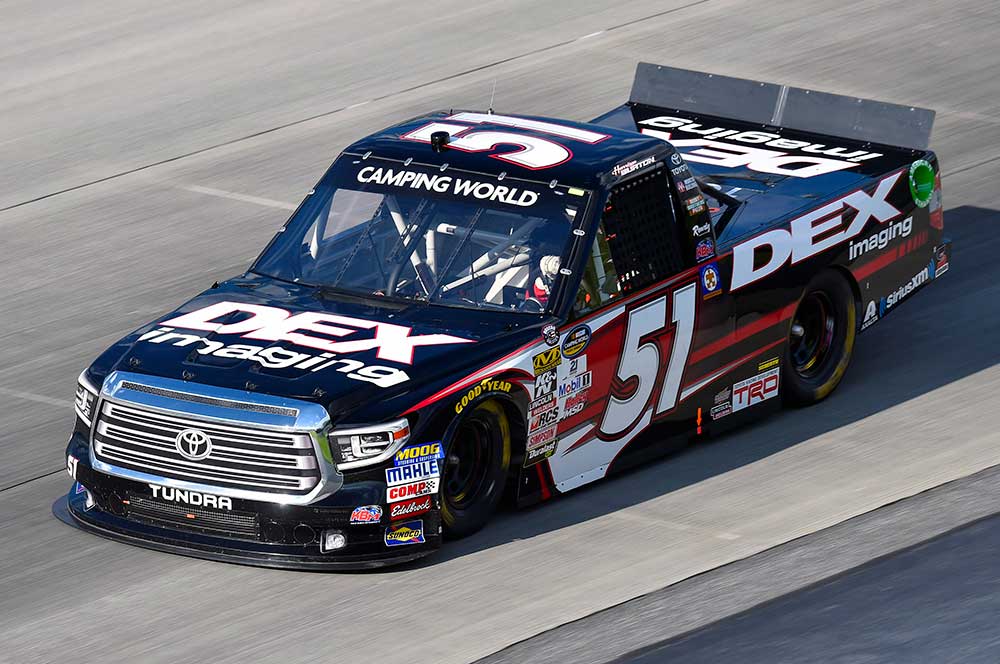 MOORESVILLE, N.C. (June 20, 2017) –  Friday night, as the sun sets over Iowa Speedway, Harrison Burton will zip up his firesuit, slip on his gloves, secure his helmet and strap into his No. 51 Morton Buildings Toyota Tundra for the M&M’s 200 in his third NASCAR Camping World Truck Series (NCWTS) race of the 2017 season.

The 16-year-old is no stranger to the 7/8-mile track in Newton, Iowa. Burton tested his Toyota Tundra at the track in April with the KBM team where he made fast runs and learned how his truck will handle during the race Friday night. In July of 2016, Burton raced in the ARCA Racing Series at Iowa where he started sixth and finished third out of 29 cars. Later that month, Burton took the green flag at Iowa for the NASCAR K&N Pro Series East and West combination race where he started 18th and finished 26th.

Although the rookie driver may be out of school for the summer, he is still learning when it comes to racing in the NCWTS. In his first “test” and season debut in the No. 51 Tundra at Martinsville (Va.) Speedway earlier this season, Burton started the race from the seventh position and after a late-race spin that put him near the rear of the field, he worked his way back to a solid 13th-place finish. During his second “test” piloting the No. 51 Tundra at Dover (Del.) International Speedway, Burton started the race 10th and raced his way to a 13th-place finish.

Burton will be put to the test once again for Friday night’s race at Iowa and he hopes he can take what he’s learned and apply it this weekend.

When Burton takes the green flag Friday at Iowa Speedway, he will don the colors of a new sponsor Morton Buildings. Morton Buildings, based out of Lexington, N.C., is the leader in the post-frame construction industry, and continues to innovate and improve building components and techniques. Burton is excited to have a new sponsor on board his No. 51 Toyota and hopes to celebrate by driving his Morton Buildings Tundra into victory lane Friday night.

Harrison Burton, Driver of the No. 51 NCWTS Morton Buildings Tundra:

You’ve had two races behind the wheel of the No. 51 Tundra so far this season. What are your thoughts about Iowa?

“I’m really looking forward to Iowa this weekend. I’ve learned a lot already this season at Martinsville and Dover, and I hope I can take what I’ve learned and apply it at Iowa. I’ve raced there a few times before, but never in the Truck Series. It is one of the nicest facilities on the circuit and the racing is always fun to be a part of.  I know the No. 51 team has been working really hard to unload a fast Morton Buildings Tundra and I’m confident we can get it done Friday night.”

How do you feel about having Harrison Burton back piloting the No. 51 Tundra Friday night at Iowa Speedway?

“Harrison is a great kid and I enjoy working with him. We tested at Iowa earlier this year and learned a lot at the track that will prepare us for this weekend. Iowa is a fun track with a lot of character that produces great races. I’m excited to have Harrison behind the wheel and see what we can do to bring home a great finish Friday night.”

KBM-033: The No. 51 Morton Buildings team will race KBM-033 for Friday’s M&M’s 200. Burton drove this Tundra to a 13th-place finish earlier in the season at Dover (Del.) International Speedway.