Promising Night For Brandon Jones and the No. 51 Soleus Air Tundra Goes Up in Smoke at Kentucky Speedway 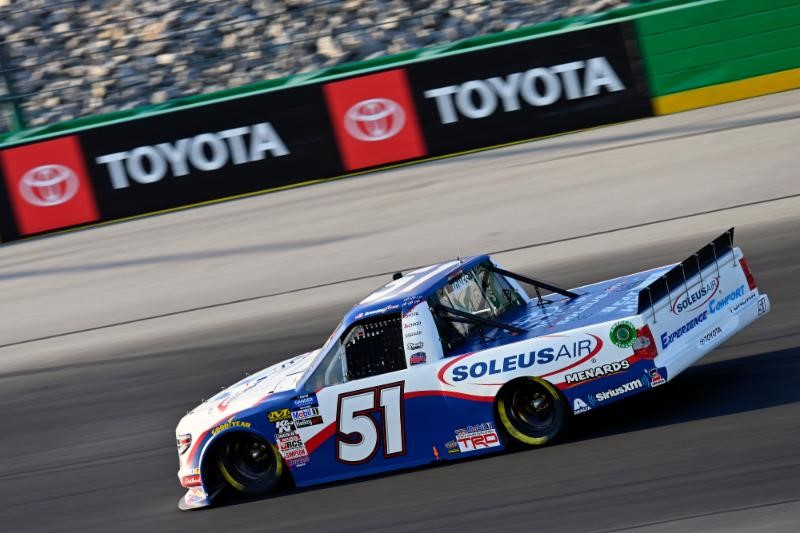 In his fourth start for Kyle Busch Motorsports this season, Brandon Jones was leading the Buckle Up In Your Truck 225 at Kentucky Speedway, when contact from another vehicle sent him into the wall, which caused terminal damage to the No. 51 Soleus Air machine on lap 64. On Thursday morning, Jones posted the 11th-fastest time in first practice and the fourth-fastest time in second practice for the NASCAR Gander Outdoors Truck Series. Thursday afternoon, Jones nearly spun in his single-lap qualifying attempt, but was able to make the save and earn the 27th starting position.

After the green flag flew on Thursday evening, Jones quickly began to make his way through the field, making short work of getting to the front. By the end of the second stage, the No. 51 Tundra was solidly inside the top-10 in the eighth position. Unfortunately, as the second stage was coming to an end, Jones was leading when the No. 98 vehicle put him into the wall, ending his night in a fiery crash on the front stretch.

Brandon Jones, driver of the No. 51 Soleus Air/Menards Tundra for Kyle Busch Motorsports:

What happened with you and Grant Enfinger on track?

“I’d be curious to know what he (Grant Enfinger) said. It’s tough. I’ve raced with Grant really hard. He races hard, but I don’t know. I asked him if he was upset about the restart. I waited really, really late to go, but that’s just me playing games. We’ve got to try to get the lead there. It was pretty cool that we got it. They’ve all been racing hard. A lot of wrecks early. I hate it. We had Soleus Air here. It’s their hometown. We had a really, really fast Toyota Tundra. It was looking like a repeat of Chicago with a better finish than what we had there too. I get one more with these guys. I hate for Rudy (Fugle, crew chief) and all them. They build great trucks every single week. They’ll keep coming and we’ll keep performing and we’ll get there.”

Todd Gilliland, driver of the No. 4 Toyota Tundra, finished 17th

The No. 51 team leaves the 13th race of the season ranked first in the Truck Series Owner’s Championship Standings, 12 markers ahead of second place, No. 98.