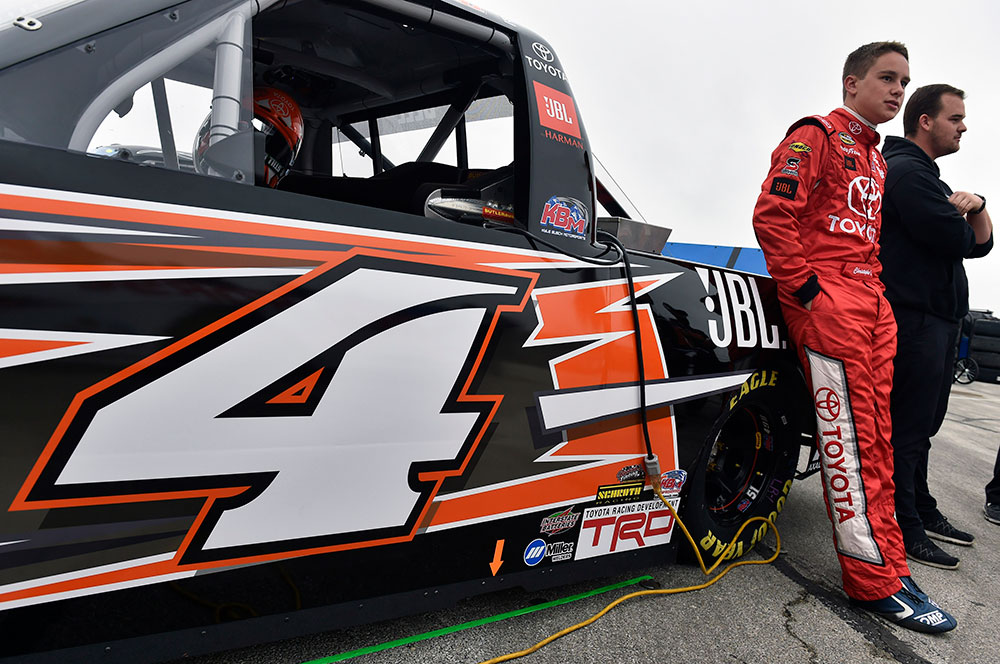 MOORESVILLE, N.C. (Feb. 21, 2017) – Christopher Bell begins his second full-time season in the NASCAR Camping World Truck Series with Kyle Busch Motorsports (KBM) on Friday night piloting the No. 4 JBL Tundra in the NextEra Energy Resources 250 at Daytona (Fla.) International Speedway. The open-wheel dirt standout turned pavement prodigy enters the 2017 season having recorded one win in each of his first two seasons as a competitor in the Truck Series. He put his name on the NASCAR map with a victory on the dirt at famed Eldora Speedway in Rossburg, Ohio in just his third series start in July of 2015 and earned his first win on pavement last June at Gateway Motorsports Park in Madison, Ill.

Bell overcame a disappointing start to the 2016 season by posting top-10 finishes in 14 of the final 16 events. His victory at Gateway last June earned him a spot in the Inaugural Truck Series Chase and his consistent finishes throughout the elimination-style playoff format landed him a spot in the Championship Four at Homestead-Miami (Fla.) Speedway. The Oklahoma native posted an eighth-place finish in the series finale, which earned him a third-place finish in the championship standings.

With 30 career Truck Series starts already under his belt, Bell is hoping to parlay his experience into more wins in 2017. To help him achieve that goal, the talented youngster will be paired with crew chief, Ryan “Rudy” Fugle this year. Fugle is no stranger to victory lane or the head table at the Truck Series banquet in Miami, as he has guided his team to an Owner’s championship in all three of his seasons (2013, 2015 & 2016) as a crew chief at KBM, including a combined Owner’s/Driver’s Championship with Erik Jones in 2015.

The New York native’s drivers have combined for 16 wins, nine poles, 33 top-five and 52 top-10 finishes across his 68 races calling the shots for the organization. Under his tutelage last season, William Byron collected a Truck Series’ rookie record seven wins, three poles, 11 top-five and 16 top-10 finishes while leading the No. 9 Tundra team to KBM’s fourth consecutive and fifth overall Owner’s championship.

Bell started off his year on a high note with a win in the Chili Bowl Midget Nationals at the Tulsa (Okla.) Expo Raceway in January. The talented youngster, who became just the second Okie to win the prestigious race in its 32-year history, is hoping to build off that momentum as he enters the 2017 Truck Season prepared to win more races.

Have you set any goals for the 2017 season?
“I’m really excited to begin my second full-time season with Kyle Busch Motorsports. Every track that we will race at this season I’m already going to have experience at, unlike last year where a lot of the tracks I was going to for the first time. I feel like having more experience will be a big help — I know what to expect from all of the tracks and that will allow me to be better prepared for each and every race this season. My goal going into this year is pretty simple and that’s to go out and win more races.”

You’ve been in contention to win in all three of your superspeedway starts. Do you feel like you are a good plate racer?
“Whenever you’re racing, all you can do is ask to have a shot at the win and out of my three superspeedway races I can say I’ve had a shot at winning all of them. Daytona is always a wild card, but I feel we are as prepared as ever to put ourselves in a position to win. If you keep knocking on the door, eventually one is bound to go your way. Hopefully we can start our season out on a high note and put the JBL Tundra in victory lane on Friday night.”

Are you excited about the changes that NASCAR made in the offseason?
“I feel like the new format this year will be huge for us. I’m confident that we will be able to go out and win segments and win races and build up some bonus points. If we are able to do that, it’s kind of like building up a savings account for the playoffs. The more bonus points you have built up from the regular season, you’ll have a safety net to fall back on in case you have any issues like William (Byron) did last year at Phoenix.”

Rudy Fugle, crew chief of the No. 4 JBL Toyota Tundra:

What is your outlook for the No.4 team this year?
“Our goal is to go out each week and be really consistent and be fast. I fully expect to run up front, win segments, win races and gain a lot of points.”

Are you excited about the changes that NASCAR made in the offseason?
“I’m excited about it — there are a lot of good things about it. No matter what the format is, as long as you go fast and run up front you’re going to have a chance to win races and compete for a championship and that’s what we expect to do. With the bonus points available in the segments, you might think about things differently, but fundamentally you still want to win the end of the race — that’s when they give you the trophy and you hang the banners. There are going to be times where the first couple of segments aren’t going to affect the end of the race, so you’ll do everything you can to collect those playoff points. Every week is going to be a little bit different and you never know when we might have to change our strategy based on how the race is playing out.”

KBM-38: The No. 4 JBL Racing team will unload KBM-38 for Friday night’s season-opening NextEra Energy Resources 250 at Daytona (Fla.) International Speedway. It is the same Tundra that William Byron won from the pole with in the 2016 Truck Series finale at Homestead-Miami (Fla.) Speedway.

The Fugle File:
Ryan “Rudy” Fugle begins his fourth season as a crew chief at KBM and sixth overall with the organization. The New York native has guided his team to an Owner’s championship in all three of his seasons (2013, 2015 & 2016) atop the pit box at KBM, including a combined Owner’s/Driver’s Championship with Erik Jones in 2015. His drivers have combined for 16 wins, nine poles, 33 top-five and 52 top-10 finishes across his 68 races calling the shots for the organization. Under his tutelage last season, William Byron collected a Truck Series’ rookie record seven wins, three poles, 11 top-five and 16 top-10 finishes while leading the No. 9 Tundra team to KBM’s fourth consecutive and fifth overall Owner’s championship.

Fugle’s best finish atop the pit box in the Truck Series at Daytona was a runner-up finish with Erik Jones in 2015. His NCWTS drivers have registered an average starting position of 12.3 and an average finish 11.0 across three starts at the “World Center of Racing.”