Prepared for the His Next Mission 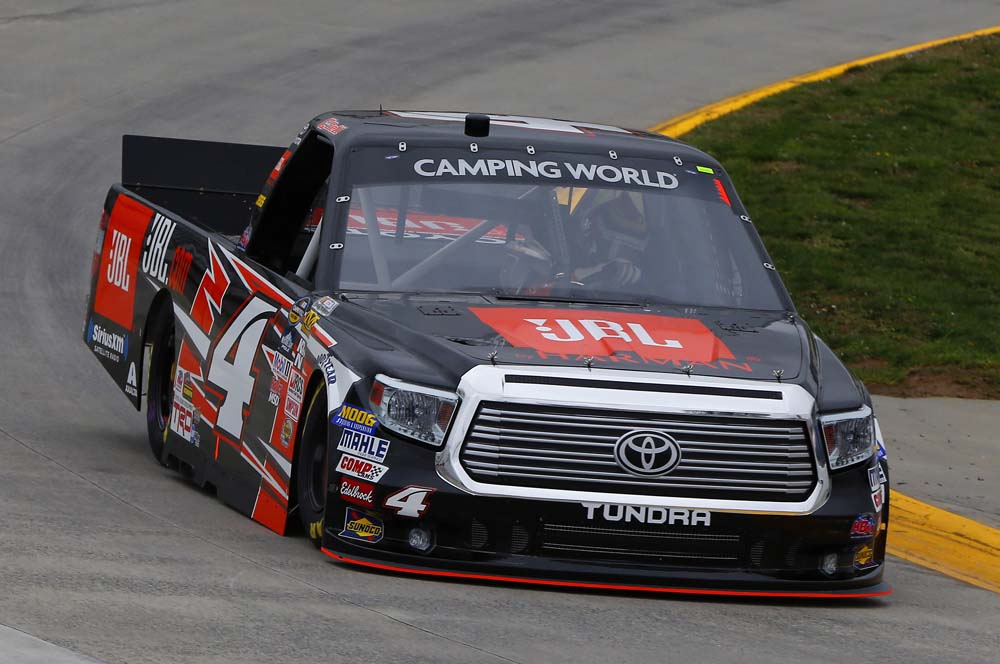 MOORESVILLE, N.C. (Oct. 25, 2016) – After posting an average finish of 4.6 across the three races that made up the Round of 8 of the inaugural NASCAR Camping World Truck Series Chase, Christopher Bell collected the second-most points of the eight-driver field and earned a spot in the Round of 6. Bell has chosen to accept his next mission and will begin his pursuit of earning a berth in the Championship 4 this weekend in the Texas Roadhouse 200 at Martinsville (Va.) Speedway.

Kyle Busch Motorsports (KBM) has supplied its 21-year-old driver with a Tundra and crew chief that have both proven capable of winning on the challenging .526-oval known as “The Paperclip.” The Oklahoma native will get behind the wheel of chassis “007” for this week’s mission. The Tundra has eight wins across 25 starts since being built in 2011, including three of KBM’s five victories at Martinsville. Two of those wins came with Bell’s crew chief Jerry Baxter calling the shots for Darrell Wallace Jr., who brought home grandfather clocks from back-to-back wins in the fall of 2013 and 2014.

Saturday’s 200-lap event will be Bell’s second time racing at Martinsville. He qualified 14th this spring and overcame issues with his transmission and a pit road penalty to put himself in position for a top 10 late in the race, but got turned from behind with 14 laps remaining and ended the day with a 19th-place finish.

Since then Bell has made two starts on short, flat tracks and produced and average finish of 1.5. The talented youngster led twice for 38 laps en route to his lone victory of the season at Gateway Motorsports Park in Madison, Ill., to earn his spot in the Chase. In the first race of the Chase at New Hampshire Motor Speedway in Loudon, the Rookie of the Year contender led 11 laps and was chasing down KBM teammate William Byron in the closing laps for the win but came up just short.

Knowing the importance of getting off to a strong start in the Round of 6, Bell has prepared for his next mission by putting in extra time the last few weeks studying race tapes and making laps around Martinsville on iRacing. With “007” underneath him and Jerry Baxter calling the shots from atop his pit box, his task is to lock into the Championship 4 with a victory on Saturday.

Do you feel like you have a better understanding of what it takes to be successful at Martinsville this time?
“I had a feeling that Martinsville was going to be a struggle earlier this year, but now I have some seat time there and I’m excited to go back and have a stronger run this time around. I’ve done a lot of homework to prepare for this race because I know this is going to be the toughest of the three races in this round for me personally as a driver. I’ve watched a lot of video of previous races, including some onboard videos, and made a lot of laps at Martinsville on iRacing the last couple weeks to try and get a better feel for how to get around there.”

Does the success you had at Gateway and Loudon help your confidence going back to Martinsville?
“I’m definitely more confident on the short, flat tracks than I was the first time we raced at Martinsville. Jerry (Baxter, crew chief) has had a lot of success on the flat tracks with Bubba, (Darrell Wallace Jr.) including a couple wins at Martinsville, so I have a lot of confidence that he is going to give me a truck that is capable of running up front if I can do my part. I felt like we struggled in April at Martinsville, but we were really good at Gateway (Motorsports Park) and New Hampshire and I think we’ll have another really fast JBL Tundra on Saturday.”

With this race being 50 laps shorter than the spring race, how does that affect your strategy?
“It’s a little bit easier to call this race because of the number of laps that you have to run on the tires that you are allotted. We just need to treat the first race in this round exactly like we did New Hampshire in the first round. We need to qualify up front because track position is huge and it is so hard to pass without tearing up your equipment. We did a great job at New Hampshire — qualified second, ran second most of the day and came away with a second-place finish — and now we need to do it again on Saturday to start off this round with another solid finish.”

The Book on Baxter:
Veteran crew chief Jerry Baxter is in his fourth season atop the pit box for KBM. Since joining KBM, Baxter’s drivers have posted eight wins, three poles, 1368 laps led, 32 top-five and 54 top-10 finishes across 86 starts. The California native spent the 2015 season calling the shots for KBM’s No. 51 team, which collected two wins, 10 top-five and 14 top-10 finishes with drivers Daniel Suarez (12 starts), Matt Tifft (six starts), Kyle Busch (three starts), and Christopher Bell (one start) behind the wheel. In addition to his eight wins at KBM, he boasts one other Truck Series win (Cale Gale, 2012) and one NASCAR XFINITY Series win (David Reutimann, 2007).

Baxter’s drivers have collected two wins, one pole, 261 laps led, four top-five and six top-10 finishes resulting in an average finish of 10.8 across 10 starts at Martinsville. With Baxter calling the shots, Darrell Wallace Jr., won back-to-back fall races in 2013 and 2014.