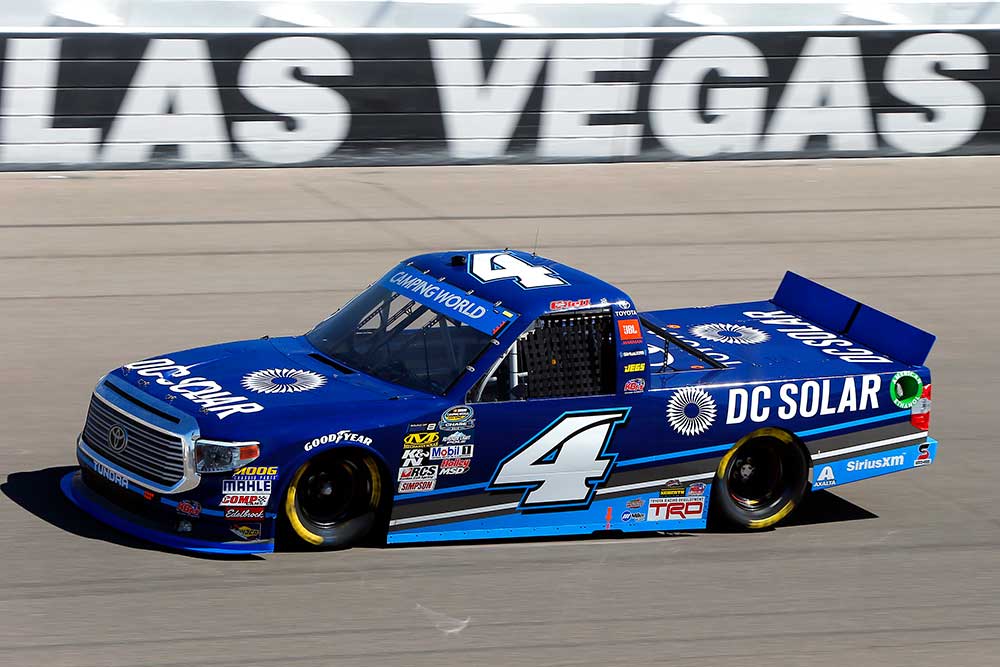 MOORESVILLE, N.C. (Sept. 27, 2017) – By winning the first race in the Round of 8 in the NASCAR Camping World Truck Series playoffs last weekend at New Hampshire Motor Speedway in Loudon, Christopher Bell and the No. 4 Toyota Racing team have already punched their ticket to the Round of 6 that begins Oct. 28 at Martinsville (Va.) Speedway. With nothing to lose in Saturday’s Las Vegas 350 at Las Vegas (Nev.) Motor Speedway, the team will be able to concentrate solely on winning stages and the race and adding more chips to their stack of 47 playoff bonus chips that they’ll bring with them to the next round.

Bell will be sporting primary sponsor DC Solar – a clean energy company that specializes in mobile solar products – once again this year on his No. 4 Tundra at Las Vegas. In last year’s event, Bell started 16th but was able to bring the DC Solar Tundra home to a sixth-place finish. The California-based company was also his primary sponsor for his win in the Chili Bowl Midget Nationals at Tulsa (Okla.) Expo Raceway in January.

The 22-year-old became just the second Oklahoma native to bring home the Golden Driller in the 31 years that the prestigious event has been held in his home state. The win was so special to Bell that he bought the winning car from Keith Kunz Motorsports and has it on display in the dining room of his current residence in North Carolina. A video of Bell and his friends transporting the vehicle from his garage into his dining room was posted on his Facebook page in May and has over 440,000 views to date.

The Chili Bowl victory in January was the start of what has been an extremely successful year for Bell. The talented wheelman has collected five wins and three poles across 17 starts in his second full-time season in the Truck Series and won the first-ever regular season points championship in the Truck Series. He also leads the series in nearly every other statistical category, including laps led (666), top-five finishes (11), top-10 finishes (15), average starting position (4.5), average finish (6.2) and fastest laps run (332).

In addition to his Truck Series accomplishments, Bell has been successful in a variety of forms of racing in 2017. He made his NASCAR XFINITY Series debut in May and across four starts for Joe Gibbs Racing this season has earned one pole, 152 laps led, one top-five and two top-10 finishes. The Toyota Racing driver won his lone ARCA Racing Series start at Chicagoland Speedway in Joliet, Ill., earlier this month and on dirt has combined to win 10 races between Midgets (seven) and Sprint Cars (three).

Bell is hoping to continue his 2017 winning spree Saturday at Las Vegas Motor Speedway. With his ticket to the Round of 6 already punched, via his win last week at New Hampshire, he’s playing with house money this week and can go all in to win.

Christopher Bell, driver of the No. 4 NCWTS DC Solar Tundra:

Are you excited to have DC Solar onboard your Tundra this week?

“It will be nice to have DC Solar onboard at Las Vegas again this year. We had a decent run for them in last year’s race and I had a huge win in the Chili Bowl earlier this year with them as my primary sponsor. Now it’s my job to go out on Saturday and put them in victory lane in a Truck Series race.”

With already having earned a berth in the Round of 6, what will your strategy be the next two races?

“I sat down with Rudy (Fugle, crew chief) this week to talk about what our strategy will be these next two races and really the only thing that is available for us is 14 playoff points — that’s it. Second place in a stage or second place in the race means nothing to us, so we have nothing to lose. We just need to go out and try and collect those 14 points and put ourselves in a better spot for the next round of the playoffs.”

How big is winning the first race of the playoffs and getting an automatic berth into the Round of 6?

“It’s perfect — just what we needed. This will take a lot of pressure off us the next two races — especially at Talladega. Nobody wants to go into Talladega knowing that they have to point their way into the next round, so a win at New Hampshire was just what the doctor ordered. We’ve already advanced to the next round, but there are still 14 bonus points available these next two races. So, our goal is to add as many of those bonus points as we can and keep adding to our playoff points total that carries over to the Round of 6.”

KBM-047: The No. 4 DC Solar Racing team will unload KBM-047 for Saturday’s Las Vegas 350 at Las Vegas (Nev.) Motor Speedway. It is the same Tundra that Bell led a race-high 72 laps and finished third with earlier this month at Chicagoland Speedway in Joliet, Ill.

Ryan “Rudy” Fugle begins his fourth season as a crew chief at KBM and sixth overall with the organization.  The New York native has guided his team to an Owner’s championship in all three of his seasons (2013, 2015 & 2016) atop the pit box at KBM, including a combined Owner’s/Driver’s Championship with Erik Jones in 2015. His drivers have combined for 21 wins, 12 poles and 43 top-five finishes across his 86 races calling the shots for the organization. Under his tutelage last season, William Byron collected a Truck Series’ rookie record seven wins while leading the No. 9 Tundra team to KBM’s fourth consecutive and fifth overall Owner’s championship.

Fugle’s NCWTS drivers have posted one top-five and two top-10 finishes resulting in an average finish of 10.3 across three starts in “Sin City.” His best result was a fifth-place finish with William Byron in last year’s event.

DC Solar is a clean energy company that specializes in mobile solar products. Our flagship product, The Solar Eclipse, is the most widely distributed mobile solar generator in the U.S., and it has revolutionized the solar industry by taking the technology off-grid.

a difference in how people use and think about power.