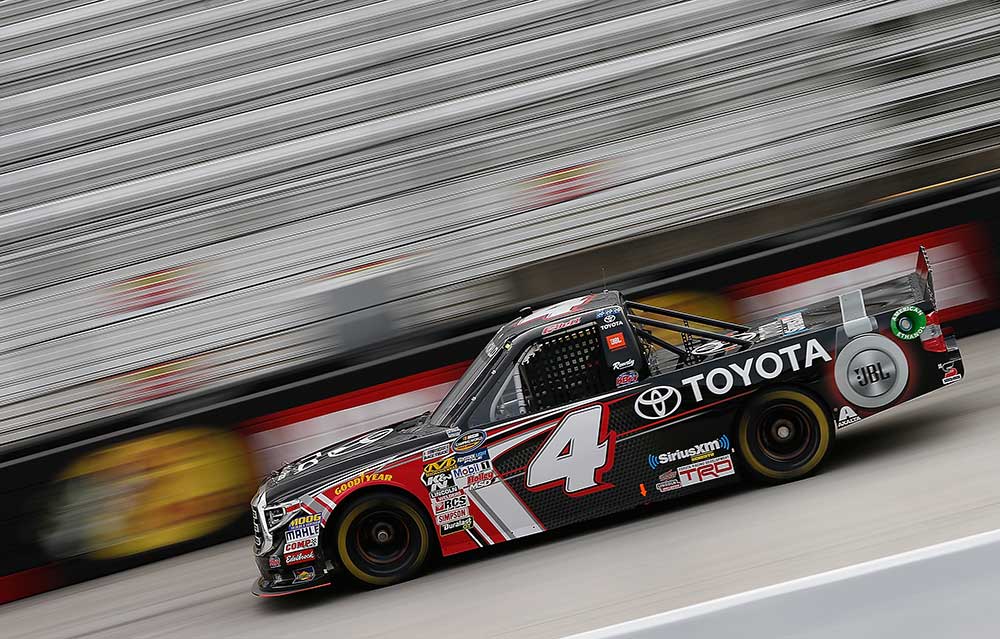 MOORESVILLE, N.C. (Oct. 11, 2017) – Christopher Bell will be one of two NASCAR Camping World Truck Series (NCWTS) playoff contenders that can sleep easy this week as the Round of 8 comes to a close and two drivers will be eliminated at Talladega (Ala.) Superspeedway. Bell, who has been atop the NCWTS championship standings for the last seven races, punched his ticket to the Round of 6 two races agoin the opening race of the playoffs at New Hampshire Motor Speedway in Loudon and fellow Toyota competitor Ben Rhodes joined Bell in the “Sleep Easy Club” in the series’ last stop at Las Vegas (Nev.) Motor Speedway.

Bell boasts an average finish of 9.5 across his two prior starts at Talladega, but both have been very eventful.  Two years ago at Talladega, he made his superspeedway debut tackling the 2.66-mile tri-oval in just the fifth start of his Truck Series career. Following the advice of clinging to the yellow line along the inside lane of the track he managed to register an average running position of 9.7 and with four laps remaining found himself in the fourth position. A strong restart allowed the youngster to push Brandon Jones to the lead, but NASCAR ruled that he “engaged” the bumper of Jones’ truck and issued a pass-through penalty. Just before he was going to serve his penalty a multi-truck wreck brought out the caution, which forced him to restart in the 15th position at the tail end of the field for the green-white-checkered finish. Before the race ended under caution, the rookie driver was able to pick up two positions and left his superspeedway debut with a respectable 13th-place finish.

Last year at Talladega, while racing to advance to the next round of the inaugural Truck Series Chase, Bell experienced a broken shifter in the middle stages of the race and had to surrender his position inside the top 10 to hit pit road. Across the next three caution periods, his over-the-wall crew successfully unfastened his shifter lever and mounted a new one in his Tundra. After that problem was fixed, the Oklahoma native suffered minor cosmetic damage in a 15-truck accident with just over 30 laps remaining. The crew once again went to work fixing his Tundra and returned him to the track in the 16thposition with 25 laps remaining. Bell had advanced to the seventh position for the final restart of the race and ended up moving up to sixth over the final two laps.

After two years of stress-filled races at Talladega, Bell already has his ticket punched to the Round of 6 and enters Saturday’s 94-lap event with a peaceful easy feelin’. When it’s all said and done, he hopes to be standing on the ground in victory lane.

How does it feel to be going into Talladega already having your ticket punched to the next round of the playoffs?

“Going into Talladega with a win already in this round of the playoffs is going to be nice because we can be aggressive and do everything we can to win the race and have no regrets over the course of the weekend. Other drivers that don’t have a win will have to race carefully and try and avoid the big wreck, so that should be a huge advantage for us. Our only goal this weekend is to win both stages and win the race so that we can collect some more bonus points before the next round of the playoffs starts at Martinsville in few weeks.”

What has been the key to being able to run up front at superspeedway races?

“The key for me being good at superspeedway races is that everyone at Kyle Busch Motorsports always gives me a fast Tundra. I feel like we’ve been in a position to win races and it just hasn’t happened yet. Almost every superspeedway race that I’ve competed in so far, we’ve had a shot at the win and that’s all that you can ask for in these types of races. Now, I just need to capitalize on that shot. We need to make sure that we survive until the end of the race, so that we are in a position to win. I feel like I didn’t do that at Daytona earlier this year — I got myself in trouble and we didn’t have a shot to win at the end. It would be really cool to put our Toyota Tundra in victory lane Saturday and get my first superspeedway win.”

How does calling a race at a superspeedway compare to other tracks on the schedule?

“I think calling a race at a superspeedway is almost the same as it is at the other races. You are always thinking about what strategy you are going to play with having a shortage of tires — it’s not like racing in the Cup Series where you can pit for tires almost every time there is a caution. You are always trying to play ahead and have a pit strategy where you have just enough fuel to get to the end of the race. With Talladega being such a long track, obviously the fuel runs are shorter, so you have to react quicker.”

KBM-13: The No. 4 Toyota Racing team will unload KBM-13 for Saturday’s Fred’s 250 at Talladega (Ala.) Superspeedway. It is the same Tundra that Bell led six laps with en route to an eighth-place finish in this year’s season-opening event at Daytona (Fla.) International Speedway. William Byron finished 10th with this Toyota in last year’s race at Talladega.

Ryan “Rudy” Fugle begins his fourth season as a crew chief at KBM and sixth overall with the organization.  The New York native has guided his team to an Owner’s championship in all three of his seasons (2013, 2015 & 2016) atop the pit box at KBM, including a combined Owner’s/Driver’s Championship with Erik Jones in 2015. His drivers have combined for 21 wins, 12 poles and 44 top-five finishes across his 86 races calling the shots for the organization. Under his tutelage last season, William Byron collected a Truck Series’ rookie record seven wins while leading the No. 9 Tundra team to KBM’s fourth consecutive and fifth overall Owner’s championship.

Fugle’s NCWTS drivers have posted one top-five and three top-10 finishes resulting in an average finish of 8.0 across three starts at Talladega. His best result was a fourth-place finish with Erik Jones in the 2015 event.