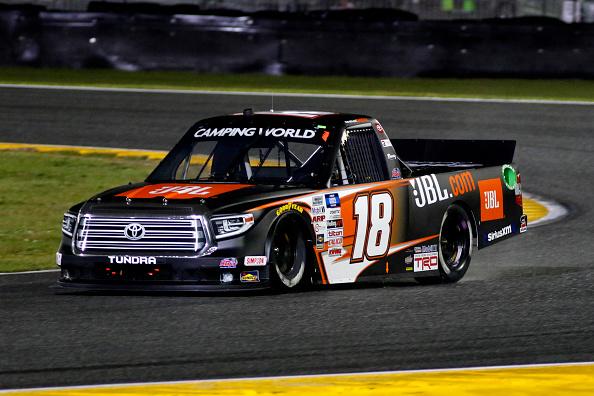 In his first career NASCAR Camping World Truck Series road course event, Chandler Smith recorded the third best average running position (8.315) of all the drivers in the field and was in line for a top-10 finish before getting spun from behind while running seventh in the second of what would be three attempts at NASCAR overtime.

After pitting for four fresh tires before the start of the final overtime period, the talented teenager would drive from 27th to 12th before the race ended under caution.

How did your night go?

“Overall, it was a good night at Daytona International Speedway with the road course. We had a really good JBL Toyota Tundra, the driver just lacked experience and more seat time. We were running in the top 10, or so, when overtime kept kicking in and finally got wrecked. We were able to drive from 27th to 12th in the last two laps, so that was a positive and we’ll keep building off of it and keep moving forward.”

Smith and the No. 18 JBL team leave the second race on the Camping World Truck Series schedule fourth in the championship standings, 30 points behind Rhodes.

Smith will be behind the wheel of the No. 18 Safelite Tundra when the NASCAR Camping World Truck Series resumes action on Friday March 5 at the Las Vegas Motor Speedway. Live coverage of the Silver State 200 will be on FS1, Motor Racing Network and SiriusXM at 9 p.m. ET.