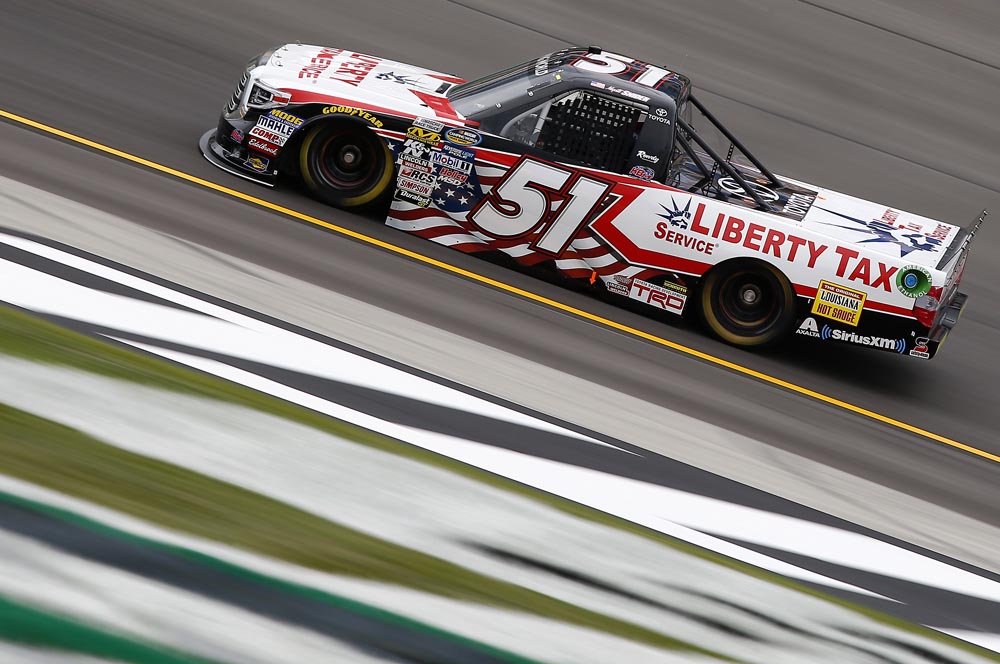 MOORESVILLE, N.C. (Nov. 14, 2017) –  For one last time this season, Myatt Snider will sit behind the wheel of the No. 51 Toyota Tundra. He will secure his helmet, strap in his seat, slide on his gloves and start his engine – all for one last time. And this time, there’s a NASCAR Camping World Truck Series (NCWTS) Owner’s championship on the line.

Throughout the NCWTS 2017 season, The No. 51 Tundra has been shared by four different Kyle Busch Motorsports (KBM) drivers – owner-driver Kyle Busch, Harrison Burton, Todd Gilliland and Myatt Snider. All four drivers have played their part in advancing the No. 51 Tundra into the final four in the Owner’s championship playoffs, and now it comes down to one race and one driver to seal the deal, Snider.

Friday’s race will be Snider’s eighth start for KBM in the NCWTS this season. The 22-year-old made his season debut at Daytona (Fla.) International Speedway. Snider started that race 13th and ultimately crossed the finish line 10th to earn his first of three top-10 finishes so far this season. Snider’s second NCWTS race of the season came at Texas Motor Speedway in Fort Worth where he was in place to grab a top 10 until a late-race spin relegated him to a 16th-place finish.  At Kentucky Speedway in Sparta he started the race from the sixth position, led four laps and ultimately crossed the finish line 16th. In his fourth race of the season, he took the green flag 10th and persevered from a mid-race spin to capture his second top 10 of the season at Chicagoland Speedway in Joliet, Ill. Snider qualified ninth for the race at Las Vegas (Nev.) Motor Speedway, but his day ended early after he was clipped from behind on the first lap and his Tundra ran into the inside wall first and came to rest on the outside wall. The damage was too severe for Snider to continue and he was scored with a 28th-place finish. Last month, Snider rolled off the grid ninth at Talladega (Ala.) Superspeedway and earned his career-best finish of third at the superspeedway. In his most recent start at Texas, Snider started the race 12th and eventually crossed the finish line 12th.

For the season finale, Snider will once again don the patriotic colors of Liberty Tax Service on the hood of his No. 51 Tundra. Headquartered in Virginia Beach, Va., last year Liberty Tax Service prepared over two million individual income tax returns in more than 4,000 offices and online. Liberty Tax also supports local communities with fundraising endeavors and contributes as a national sponsor to many charitable causes.

Kyle Bush Motorsports has a record five NCWTS Owner’s championships. The No. 51 Toyota Racing team has one goal in mind as they prepare to race one last time this season – a sixth championship. With Victory Lane in mind, there’s only 134 laps standing between the team and one more trophy to end the season.

You are closing out the season this weekend, what have you learned from your season and what will you take with you going into Homestead?

“I’ve really learned a lot about racing trucks and racing on mile-and-a-half tracks. It’s something that is so different from where I came from racing late models and short tracks. You have to think a lot more about where you position your truck in respect to how the other trucks are surrounding you. I am lucky to have had great trucks the whole year at KBM and have been competitive at every race so far. This weekend I’m going to take everything I’ve learned so far this season with me to Homestead and hopefully take the checkered flag and win Kyle (Busch) another Owner’s championship.”

What are your expectations for the last race of the season?

“I have high expectations for Friday’s night race. We have one last chance to get another win for the No. 51 team and help Myatt (Snider) capture his first win.  Homestead is a fun race, but it can also be challenging because the stakes are so high there. We just need to run up front, stay out of trouble and hopefully win KBM its sixth Owner’s championship.”

KBM-043: The No. 51 Liberty Tax Service team will race KBM-043 for Friday’s race under the lights. This Tundra was raced earlier this season by owner-driver Kyle Busch at Atlanta Motor Speedway and KBM teammate Todd Gilliland at Dover International Speedway.