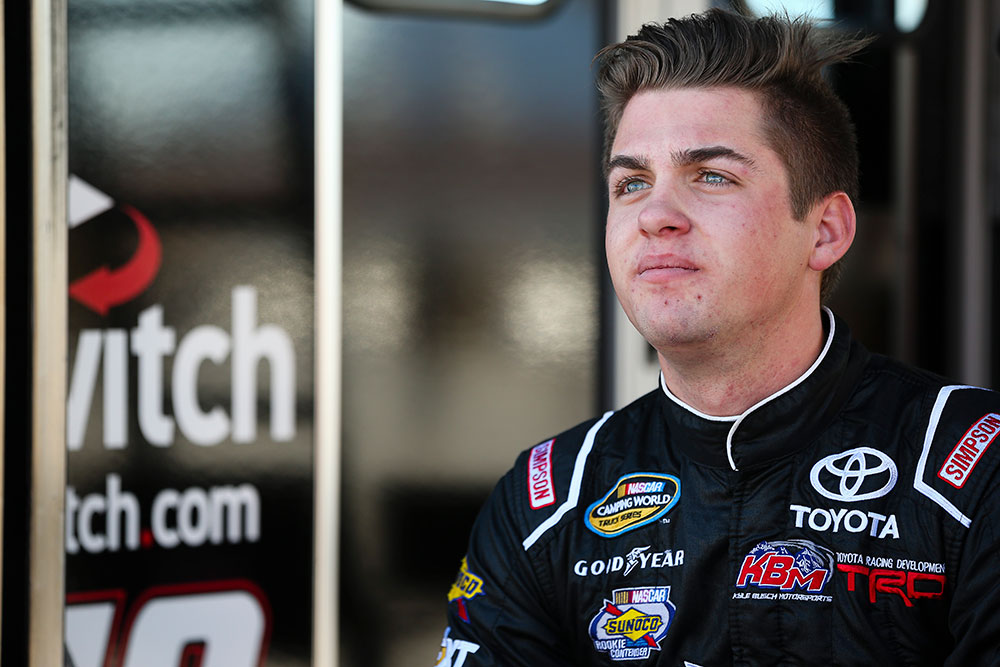 In the closing laps Gragson tried to chase down Burton, but was never able to get the lead under a second. With seven laps remaining Burton had a wheel stud fail and ended up in the outside wall and subsequently on pit road. The Switch Tundra returned to the front of the field and crossed the stripe 1.067 seconds ahead of second-place finisher Travis Braden.

“It feels good to win the Winchester 400,” Gragson said. “My crew chief Marcus Richmond and all the guys gave me a really fast Switch Camry. I have to thank everyone at Kyle Busch Motorsports, Switch and Toyota — this win feels so good.”

Gragson’s No. 18 Switch Camry rolled off from the third spot and for the first 100 laps of the race was content maintaining his position inside the top three and taking care of his equipment in a race that is known for its attrition. The 19-year-old had moved up to the second position just prior to the 100-lap mark behind teammate Cole Rouse, who started from the pole and led the first 115 laps.

On lap 116, Rouse experienced a mechanical issue and his pace slowed, which allowed Gragson to take the lead. Two laps later a caution slowed the field and crew chief Marcus Richmond summoned the Switch Tundra to pit road where the crew put on fresh left side tires and filled it with fuel. Per race procedures, teams were only allowed to replace two tires per pit stop and with controlled cautions teams did not lose spots on pit road.

With all lead-lap cars making a pit stop, Gragson maintained the lead for the lap-129 restart. He would remain out front until hitting pit road again under caution on lap 142. After getting fresh right side tires and a full tank of fuel, he returned to the track scored in the fifth position, behind four cars that did not pit.

When the field went back green, the No. 18 Switch Camry maintained the fifth spot for the next 39 laps until another caution slowed the field. Richmond elected to keep his young driver on the track and with three cars hitting pit road, Gragson took the lap-198 restart from the second spot.

After another caution and subsequent restart on lap 222, Gragson worked his way past Harrison Burton to retake the lead. The talented youngster remained out front on lap 288 when another caution occurred and set up another round of pit stops. The No. 18 team continued to alternate at each stop and this time put fresh left side tires on.

Gragson held serve on the restart, but a few laps into the run Chandler Smith took the lead. The Switch Camry remained in the second spot when the next yellow flag flew on lap 333. When pit road opened, the crew put fresh right side tires on and returned their driver to the track scored in the third position for the lap-345 restart.

On the restart, Gragson was able to gain one position and settle in behind leader Travis Braden. On lap 352, he made momentarily cleared Braden, but Braden gave him a bump-and-run and as the two drivers gathered their cars, Smith was able to work past both of them for the race lead.

Braden spun while running third with 33 laps remaining bringing out the final caution of the race.  Smith maintained the lead on the restart, but shortly after Gragson dove to the inside of him into turn one and two and slid up in front of him in the middle of the corner. Smith drove his front bumper into the rear bumper of the Switch Tundra and pushed him until the exit of turn two. Gragson nearly spun but was able to make a great save and remained in front of Smith. Unfortunately, as those two were locking bumpers, Harrison Burton went around both of them and took the lead.

Burton maintained over a second lead on the No. 18 Toyota until he experienced a mechanical failure with seven laps remaining allowing Gragson to recapture the lead. From there, Gragson cruised to the victory picking up his first marquee Super Late Model win and KBM’s fourth win in the Winchester 400.