No Restrictions for Byron at Talladega 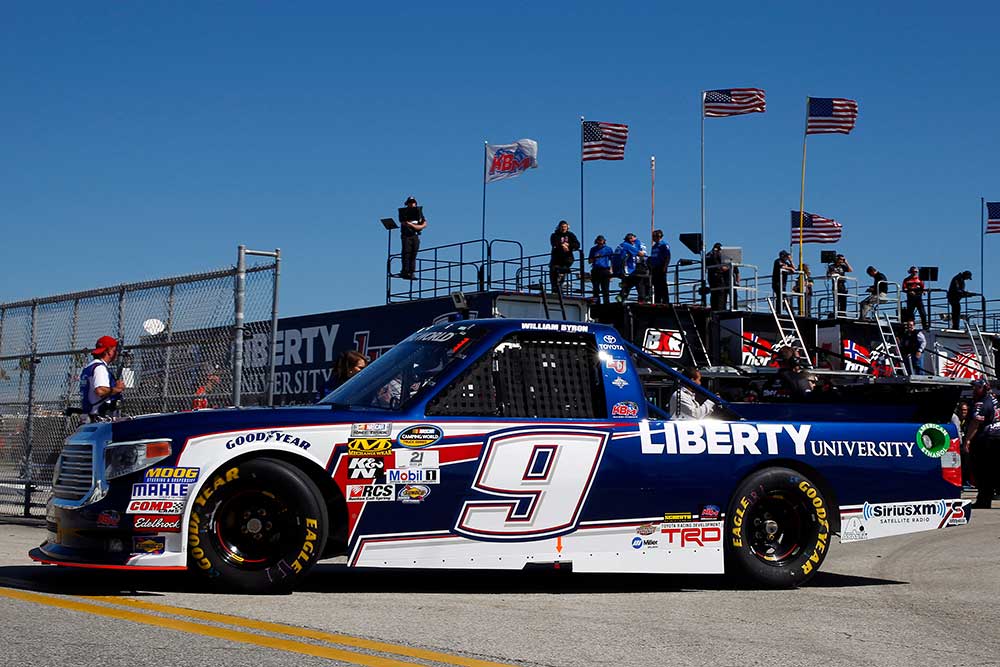 MOORESVILLE, N.C. (Oct. 18, 2016) – The pressure is on at Talladega (Ala.) Superspeedway for the first elimination race in the NASCAR Camping World Truck Series (NCWTS) Chase. Seven of the eight drivers vying for the championship are heading into the second and final restrictor-plate race of the season hoping to come away with a solid finish, and not be one of the two drivers eliminated after the race. William Byron is the only driver going into Talladega knowing he will advance to the next round since his victory in the first Chase race at New Hampshire Motor Speedway in Loudon last month secured his spot in the Round of Six.

Racing at Talladega is stressful enough with drafting in packs, learning the aerodynamics of the draft and hoping you are not in the wrong place at the wrong time to get caught up in “the big one.” This being a Chase-elimination race only adds to the stress, but not for Byron. The 18-year-old rookie knows he will be advancing in the Chase, so he can focus on adding to the experience he gained at his first NCWTS restrictor-plate race in the season opener at Daytona (Fla.) International Speedway.

Byron ran two races at Daytona in February. In addition to the NCWTS race where he finished 13th coming across the finish line with damage from a last-lap multi-truck wreck, he finished second in the ARCA Racing series event the prior weekend. Although he has never raced at Talladega, the lessons learned at Daytona will certainly carry over this weekend. He will also be racing the same Liberty University Tundra he ran at Daytona eight months ago.

Different drivers have different strategies for restrictor-plate racing. Some ride in the back for much of the race hoping to avoid the potential accidents. Some drivers charge to the front to try to stay ahead of a wreck which might take them out of contention. Although there never seems to be a right answer, one thing is for certain – William Byron will do everything he can to stay out of trouble, learn as much as he can and hope to be there at the end.

How do you approach Talladega after winning the first Chase race and knowing you are already advancing to the next round?
“I’m just going to try to go as hard as I can. I want to learn more restrictor-plate racing styles and techniques that I wasn’t really able to learn in the beginning of the year since it was my first race. I think we’ll just go with that mindset and hopefully try and get a win and do a good job.”

How important is having an experienced spotter like Tony Hirschman at a place like Talladega?
“Tony (Hirschman) is important at every race track and a key part of our team, but I feel like at the restrictor-plate tracks you have to trust your spotter even more to make bold moves when it counts. He will do a good job of keeping me patient until it really counts and is time to go at the end.”

Since this is your first trip to Talladega, how do you expect it will differ from Daytona?
“I’ve heard that Talladega is just a lot bigger and wider than Daytona, so I’m expecting there to be a little more room to move around. I’m always expecting the racing to be even more daring than it was at Daytona since there is extra room to work with and it’s the cutoff race before the next round of the Chase.”

How does racing at Talladega differ from Daytona?
“Usually handling is a little bit less of a factor at Talladega. It’s more about being in the right spot and making the right moves. The top lane can get going a little bit more if everybody lines up right. It seems to be easier to get going than at Daytona. You have to push really hard at Daytona. William will have a lot more experience drafting than he did at the first race of the year and obviously, there is less pressure not having to get a certain finish to make it to the next round. We’ll just go out there and have some fun, learn as much as we can and stay up front so we have a shot at winning.”

Fugle has two starts as a crew chief in the Truck Series at Talladega resulting in one top-five and two top-10 finishes. Erik Jones claimed Fugle’s highest finish last year when he crossed the line in fourth place.