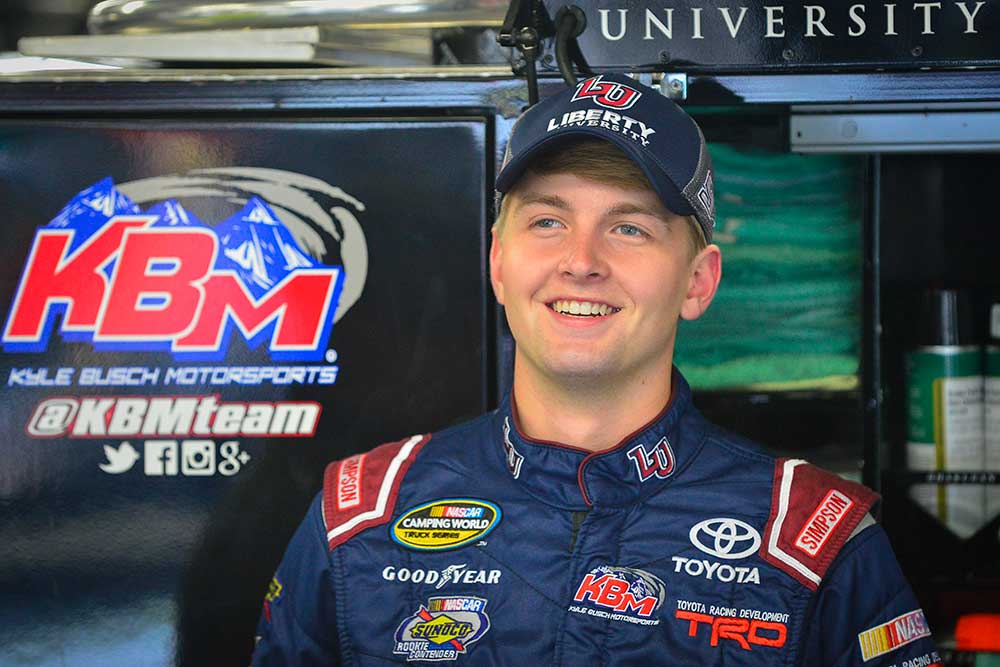 MOORESVILLE, N.C. (Sept. 27, 2016) – William Byron is not old enough to gamble in the Las Vegas casinos and with a win last weekend in the first NASCAR Camping World Truck Series Chase race at New Hampshire Motor Speedway in Loudon, now he doesn’t have to gamble on the track either. The win makes him the first driver to lock himself into the second round of the Chase. The 18-year-old rookie is now in a position where he does not have to win the next two races, but he still intends to try.

Byron has never raced at Las Vegas (Nev.) Motor Speedway, but half of his record-setting six wins this season have come on mile-and-a-half tracks. The Kyle Busch Motorsports (KBM) intermediate-track program is stout, so Byron hopes to take advantage of that to increase his 16-point lead over second-place Chaser Matt Crafton. Byron’s KBM teammate, Christopher Bell, who challenged him for the win last week is also looking to advance to the second round with a win on Saturday night.

This weekend the KBM team will be taking a different Liberty University Tundra than they have raced this year. Chassis KBM-028 has not been used since last year when Erik Jones ran five races with it, including one win, 323 laps led and three top-five finishes. The only intermediate track where it ran last year was at Kentucky Speedway where Jones started third and finished second.

What are the odds of a rookie winning the NCWTS Championship? Normally that would be considered a longshot, but with six wins already this season, it would not be wise to bet against William Byron.

What is your outlook for this weekend at Las Vegas?
“I think our mile-and-a-half program has been strong and our Tundras run really well at those types of tracks. I think if we just have a solid practice and approach it like we do every week that’s what we need to do. We don’t need to bring our bullet since we’re already in the next round, but we’re still going to compete and race really hard.”

Does having a win change your approach for Las Vegas and Talladega?
“Well Talladega is going to be a wild card in itself, so luckily we don’t have to go there worrying about where we are going to finish. We can go there and try to get a win, try not to wreck in the next couple races and just get good finishes. We approach these next couple races like we have to race for points like everyone else and get the best result we can. These next two races are still really important so we’re going to keep doing the same things we’ve been doing.”

Do you feel like a rookie since you have six wins?
“Yeah, I learned pretty quickly how much of a rookie I am a couple weeks ago at Chicago when I got in that early crash. Things just happen sometimes when you start to trust yourself and start to feel like you have that security. I definitely feel like I’m a rookie in a lot of ways, and in some ways I feel like that’s a good thing because I don’t have preconceived ideas that something won’t work based on experience. I think it’s helped our team overall be fresh and stay that way.”

Now that you are locked in to round two, does this give you a chance to experiment for upcoming races?
“Not really, we already know what we are going to run. We just might do a thing, or two different than normal since we’re always trying to learn a little bit. At this point in the year we’re just trying to refine everything we already have. Now we just go out there and enjoy a little less pressure and try to go win again.”

Fugle has two starts as a crew chief in the Truck Series at Vegas resulting in one top-10 finish with Erik Jones in 2015 when Jones crossed the finish line in ninth place.