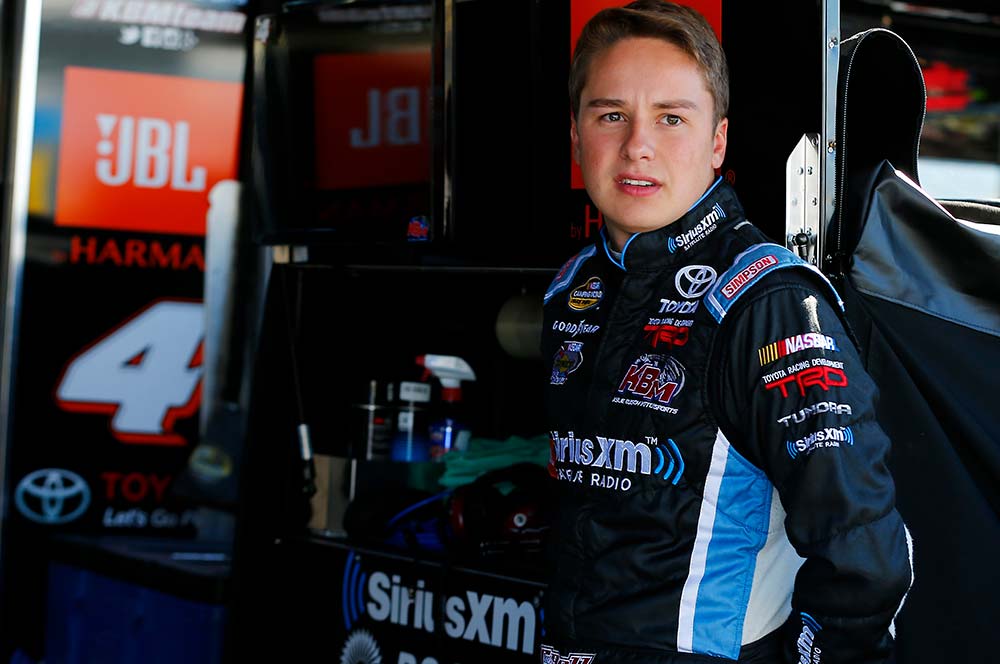 MOORESVILLE, N.C. (July 25, 2017) – Christopher Bell and the No. 4 SiriusXM team head to Pocono Raceway in Long Pond, Pa., for Saturday’s NASCAR Camping World Truck Series Overton’s 150. Bell has already secured his spot in the playoffs with three wins across the first 11 events, but with five races remaining in the regular season will be looking to earn additional playoff points and at the same time continue to cut into Johnny Sauter’s lead in the point standings.

Two of Bell’s three wins this season have come behind the wheel of the Tundra that the No. 4 SiriusXM team will unload for Saturday’s 60-lap event, KBM-38. The Oklahoma native captured the pole and won all three stages with “38 Special” in his first win of the season at Atlanta Motor Speedway in Hampton, Ga. In its most recent outing, Bell led a race-high 92 laps as he came from the 21st starting position to win the June race at Texas Motor Speedway in Fort Worth.

Bell is hoping this year’s Pocono race gets off to a better start than last year’s did. He surrendered his sixth starting position to come to pit road when he noticed the voltage level on his Tundra was low during the pace laps and was summoned to pit road. Then, he was involved in an accident on lap 17 and after lengthy repairs returned to the track scored five laps down in the 25th position. Thanks in part to a race-record nine cautions and having the longest green-flag run consist of six laps, the majority of the field remained on the lead lap and Bell was the lone driver one or more laps down. With each passing caution, the No. 4 team earned the “Lucky Dog” and finally with six laps remaining he returned to the lead lap. He restarted from the 23rd position with four laps remaining and passed 13 competitors in the closing laps to earn a remarkable 10th-place finish.

Bell is hoping to not give the field a five-lap head start this time around. The talented youngster is also hoping to continue to diminish Sauter’s points lead and end the regular season with the most playoff points, so that no other driver will have a head start on him when the Truck Series playoffs start in September at New Hampshire Motor Speedway in Loudon.

What is your outlook heading to Pocono this week?

“We got caught up in a crash early last year at Pocono, but despite the damage we were still really fast and came from five laps down to score a top-10 finish. It’s a tough track because the corners are so different, but I really enjoyed it and I’m looking forward to going back this year. The tunnel is the toughest turn because you are more on edge than you are in the other corners, so we need to focus on making sure that we’re good through there. Rudy won the race with William (Byron) last year and I expect that we’ll unload with a really fast SiriusXM Tundra like we do every week. Kyle (Busch) is racing this weekend, so you know that if you are going to get to victory lane, you are going to have to beat the boss.”

What are your goals for the remainder of the regular season?

“Keep winning races. We’ve been able to win three races and probably should have a few more under our belts — but I made some mistakes, including last week at Eldora that cost us a shot at a win. If I can eliminate some of those mistakes I’m confident that we will go out and win a few more races, collect some more playoff points and keep closing the gap in the regular season points on Johnny Sauter. If we can get the bonus for winning the regular season points and combine it with the playoff points we’ve already earned, we’ll have some insurance built up when the playoffs start.”

The first two stages Saturday are 15 laps. How will that affect the race strategy?

“I think there will be a ton of different pit strategies for Saturday’s race and that will compound by the fact that in the past there has typically been some early cautions at Pocono. Somebody has the chance to come out looking pretty like Kasey Kahne did at Indy where they think they are in trouble and then all the sudden a caution comes out and they look like a hero. You have to go in with a strategy — which we will — but be able to adapt based on how the race plays out.”

KBM-38: The No. 4 JBL Racing team will unload KBM-38 for Saturday’s Overton’s 150 at Pocono Raceway in Long Pond, Pa. In three starts driving the Tundra this season Bell has accumulated two poles and two wins. In its last outing the Toyota came from the 21st starting position to lead 92 laps and earn the victory at Texas Motor Speedway in Fort Worth.

Ryan “Rudy” Fugle begins his fourth season as a crew chief at KBM and sixth overall with the organization.  The New York native has guided his team to an Owner’s championship in all three of his seasons (2013, 2015 & 2016) atop the pit box at KBM, including a combined Owner’s/Driver’s Championship with Erik Jones in 2015. His drivers have combined for 19 wins, 12 poles and 39 top-five finishes across his 79 races calling the shots for the organization. Under his tutelage last season, William Byron collected a Truck Series’ rookie record seven wins while leading the No. 9 Tundra team to KBM’s fourth consecutive and fifth overall Owner’s championship.

Fugle’s NCWTS drivers have posted one win, one pole, 53 laps led, one top-five and two top-10 finishes resulting in an average finish of 8.7 across three starts. William Byron led 44 of 60 laps en route to the victory in last year’s event at the Tricky Triangle with Fugle calling the shots.