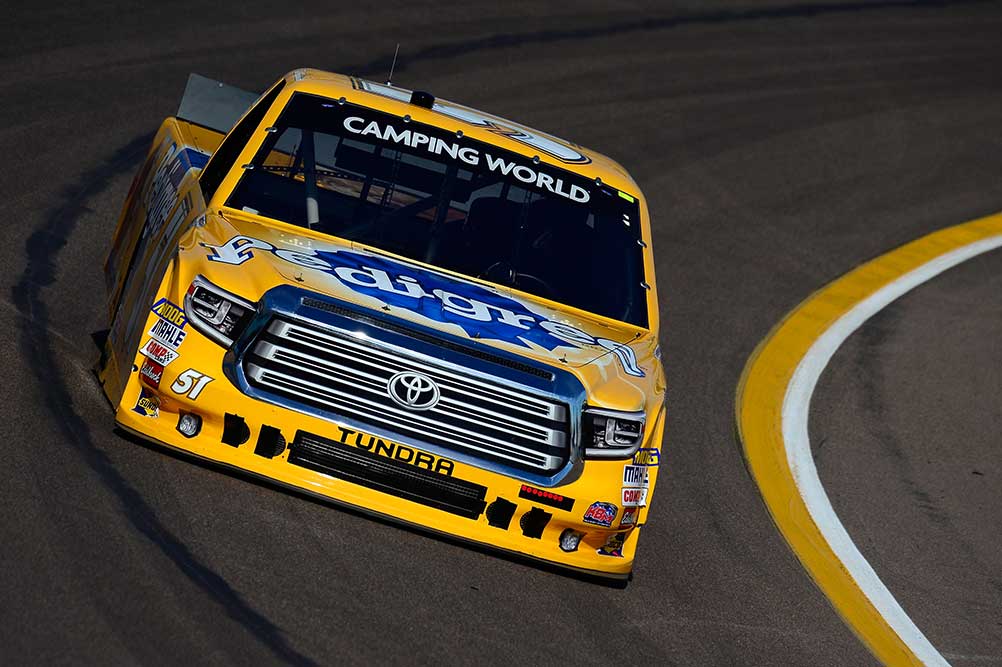 What did you take away from the truck race at Daytona earlier this year that you can apply at Talladega?

“The main thing is just how fun these trucks are to drive. The KBM trucks had a lot of speed at Daytona and I know they are going to at Talladega too, so they are just a lot of fun. Obviously, we got wrecked there towards the end, but we had a lot of speed. Bump drafting on the tri-oval is always dangerous in the trucks because of the way they line up. We’re going to keep that in mind and hopefully be up front towards the end.”

What will it be like running against your son and your own team?

“That’s going to be interesting for sure. I’m more excited for this race than any race that I ever have been excited for in my whole life — racing with Todd is always fun, but getting to race against him in his first superspeedway race. I’ve been trying to talk to him and go over the stuff that I’ve learned over the years that has helped me and the mistakes that I’ve made that have hurt me too to try and help him get ahead of that curve. I’m really excited to race against Bo (LeMastus) in our DGR-Crosley truck, that is going to be interesting too. Hopefully we can all be up there at the end and hopefully one of us takes the checkers.”

It’s the last lap with you and Todd running first and second. What do you think will happen?

“Oh man, I’ve been asked this question a million times and it’s funny because when Todd is standing next to me and they ask him he says ‘I’m gonna win, I’m gonna do whatever I have to do to win,’ and obviously we want to win. I want to win and get our PEDIGREE® Toyota Tundra in Victory Lane, but if we can be one-two coming across the line I’m definitely going to do everything I can do to win, but we’ll see. I know if the roles are reversed Todd’s going to leave me and bail, but we’ll see.”

KBM-026: The No. 51 team will race KBM-026, for Saturday’s race at Talladega. Spencer Davis finished seventh with this Tundra at Daytona in February.