No. 4 Team Proves to be ‘Sirius’ Chase Contender with Runner-Up Finish 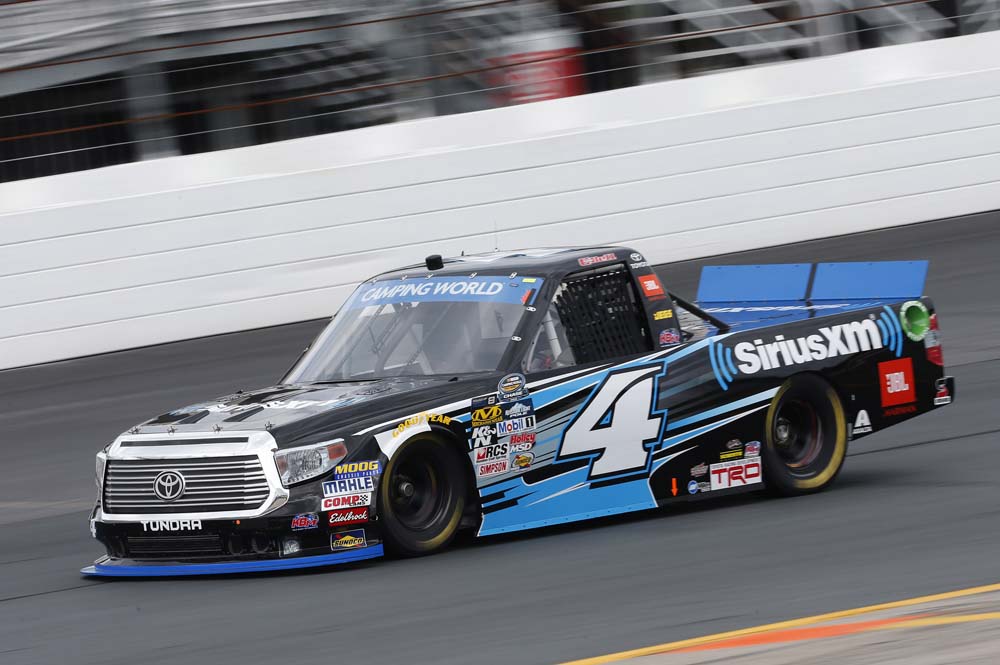 Christopher Bell and the SiriusXM Racing team proved that they are going to be a ‘sirius’ contender for the NASCAR Camping World Truck Series championship with a runner-up finish in the inaugural race of the Chase for the Championship in NASCAR’s third division. Bell led once for 11 laps and spent most of the day in the second spot chasing his Kyle Busch Motorsports’ (KBM) teammate and race winner William Byron. With 10 laps remaining Bryon’s No. 9 Tundra had developed a 2.5 second lead on the No. 4 Tundra, but as the two Toyota drivers negotiated heavy lap traffic in the closing laps Bell dug deep and was able to close to within five truck lengths of his teammate, but in the end crossed the stripe 0.4 seconds behind.

“Everyone at KBM did an awesome job this weekend,” said Bell of the one-two finish for the organization. “We tested here last month and it proved to be very helpful for all three of our Tundras. I’m really proud of that because we’ve tested at three race tracks that we’ve raced at so far and all three of the KBM trucks have been outstanding at all three. We were the second-best truck here and just needed more laps to chase the 9 (William Byron) down at the end. Have to thank Jerry (Baxter, crew chief) and all the guys on this No. 4 SirusXM Toyota team for all their hard work and thankful to Toyota, TRD (Toyota Racing Development) and JBL for everything they do as a partner for our team.”

Bell started the 175-lap race from the third position, but was able to maneuver his way into the second spot in the early stages of the event. The Oklahoma native remained in the runner-up position when the fourth caution of the day slowed the field on lap 52. Crew Chief Jerry Baxter summoned his driver to pit road where the No. 4 SiriusXM over-the-wall crew put on fresh right side tires, filled their Tundra with fuel and returned their driver to the track scored in the second spot for the restart on lap 57.

The talented youngster made quick work of KBM teammate Cody Coughlin, who pitted earlier in the race and stayed out under caution, to take the lead. Once out front, another caution flew on lap 59. Bell would hold serve on the ensuing restart and remain out front until lap 69 when Byron, who received four fresh tires on the previous stop was able to make his way back out front.

Byron and Bell remained one-two in the running order until the caution clock expired on lap on lap 103. The rookie of the year contender communicated to his veteran crew chief that his SiriusXM Tundra was “really good, but a little tight,” as the leaders were ready to pit for the final time. Baxter ordered up a four-tire and fuel stop with a minor trackbar adjustment and when the over-the-wall crew had completed service the No. 4 Toyota returned to the track maintaining the runner-up spot.

During the next green-flag run the open-wheel dirt standout communicated that his truck was “a little free,” as he fell back to the fourth position when the field was slowed for the seventh time on lap 115. Bell’s Tundra slowly came to him during the next run and he was able to work his way back up to the runner-up position with 50 laps remaining.

The final caution of the race flew on lap 128 and gave Bell the chance to line up beside his KBM teammate for the lap-135 restart. As he had proven all day, Byron was just a little bit stronger and slowly pulled out to a 2.2 second lead with 25 laps remaining. As the race proceeded caution free, the No. 4 was able to maneuver through lap traffic more efficiently, but in the end it was the No. 9 team from KBM that was able to secure the victory in the first-ever Chase race in the Truck Series and advance to the Round of 6.

Byron picked up his sixth win of the NASCAR Camping World Truck Series season, a record for a rookie in NASCAR’s third division, and the ninth for KBM as an organization in 2016. Bell finished in the runner-up position 0.446 seconds behind his teammate. Matt Crafton, Tyler Reddick and Timothy Peters rounded out the top-five finishers.

Coughlin was running in the top five when he ran out of fuel with just over 50 laps remaining and ended the day in the 20th position with his No. 51 JEGS Tundra.

The first race of the Truck Series Chase featured eight cautions for a total of 41 laps. There were three lead changes among three drivers, with a KBM Tundra leading all 175 laps, including 11 by Bell.

Bell improved one position in the championship standings and currently ranks third with two races remaining in the Round of 8 of the inaugural Truck Series Chase. As it stands, the top five in points will advance to the round of 6 following the final event of the Round of 8 at Talladega (Ala.) Superspeedway, with Byron earning an automatic bid via his win today at “The Magic Mile.” Each driver that wins in the next two races will also advance to the Round of 6.

Bell will be back behind the wheel of the No. 4 DC Solar Tundra when the Truck Series resumes action Saturday, Oct. 1 at Las Vegas (Nev.) Motor Speedway. Live coverage of the DC Solar 350 begins with the NCWTS Setup show at 8 p.m. ET on Fox Sports 1.