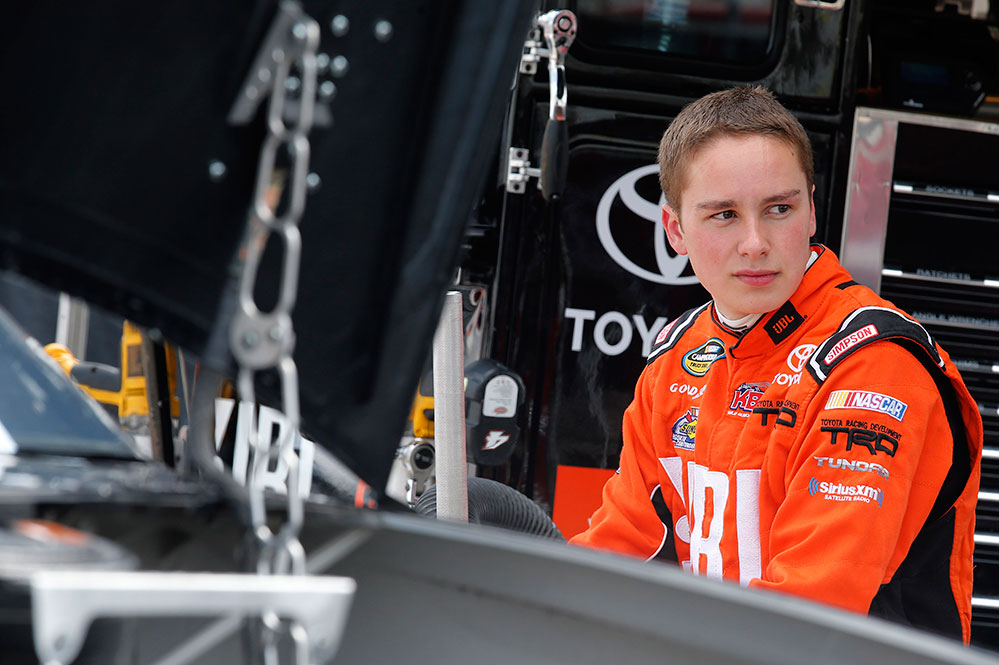 Running at the front of the field hasn’t been a problem for the 21-year-old driver this year, but finishing there proved to be difficult in the early part of the season. The talented wheelman’s average running position of 8.942 ranks second to two-time Truck Series champion Matt Crafton this season and he also has the third-highest driver rating among series regulars (93.7). Bell put himself in a position to win late in the race at both Daytona (Fla.) International Speedway and Atlanta (Ga.) Motor Speedway and was on pace for a top-10 finish at Martinsville (Va.) Speedway, but incidents late in all three races left him with disappointing results and an average finish of 20.3 after the first three events.

While it surely wasn’t easy on the young driver to have to wait five weeks to get back behind the wheel of his No. 4 Tundra, it may have been just what the doctor ordered. Two weeks ago, Bell made his first career start at Kansas Speedway in Kansas City, where he came from the fifth starting position to lead five laps and bring home what, at the time, was a season-best fourth-place finish. Last week he upped that performance in his Dover (Del.) International Speedway debut, scratching and clawing from his ninth starting position to finish third and earn the Sunoco Rookie of the Race award.

Now the Oklahoma native tackles Charlotte (N.C.) Motor Speedway for the first time Friday night in the N.C. Education Lottery 200. Bell will surely get an education on how to get around the 1.5-mile quad-oval from team owner Kyle Busch, who is driving the team’s fourth entry in the 134-lap event. Busch has produced a track-record six victories in Truck Series action at Charlotte, including four victories in four starts since Kyle Busch Motorsports’ (KBM) inaugural season in 2010.

With finishes of fourth and third in the last two events Bell is not only moving in the right direction towards collecting his first win of the season, but heading in an upward path in the Truck Series championship standings. With Busch in the field this week, getting the win will be more of a challenge, but the jackpot at the end would be much more rewarding.

How is your confidence level after producing top-five finishes in each of the last two races?

“Confidence is a funny thing. You can win all the races in the world and have all the confidence in the world, but one bad race and it’s down the drain. We were really fast at the beginning of the year and we could have won the first two races, but we didn’t close the deal out and we crashed. At Kansas, my confidence was definitely down, but it’s cool to be able to get two top-five finishes in a row. The biggest thing is, I think I’m getting confidence from my guys, so everyone as a team is getting stronger and stronger. Going into Charlotte, hopefully we can be even better yet. We were fast at Atlanta and Kansas so I feel like that speed will carry over to this week. Charlotte looks like a place that you can move around and find ways to pass people, which is something that was difficult at Kansas. If we keep running up front and putting ourselves in contention to win, eventually we’re going to get one.”

As a young driver, does it help to have Kyle racing alongside you as a teammate?

“Kyle is always accessible whether he’s driving the truck that week or not, but he’s much more accessible when he’s in the garage with you. On Thursday the only thing going on is truck practice, so he’s not going to have to run back and forth between the garages like he has to some weeks. I’m sure when the three practices are over, he’ll sit us all down and we will compare notes. It’ll be good to have him as a teammate this week, but getting a victory will also be a little bit tougher because he’s so good in the trucks at Charlotte. As they say, if you are going to be the best, you have to beat the best.”

What are some of the challenges your team will face this week at Charlotte?

“With young drivers it takes getting experience on the mile-and-a-half tracks to learn how to position your truck aero wise to be able to pass people. Another challenge this week will be that all three practices on Thursday are during the day and the race is Friday night. It’s tough for a driver that doesn’t have a lot of seat time to be able to know how to get the balance of his truck right for a night race when you are practicing during the day, so Christopher will have to rely on the experience of our team and the notebook we have at KBM to help him out.”

Veteran crew chief Jerry Baxter is in his fourth season atop the pit box for KBM. Since joining KBM, Baxter’s drivers have posted seven wins, three poles, 1218 laps led, 26 top-five and 42 top-10 finishes across 72 starts. The California native spent the 2015 season calling the shots for KBM’s No. 51 team, which collected two wins, 10 top-five and 14 top-10 finishes with drivers Daniel Suarez (12 starts), Matt Tifft (six starts), Kyle Busch (three starts), and Christopher Bell (one start) behind the wheel. In addition to his seven wins at KBM, he boasts one other Truck Series win (Cale Gale, 2012) and one NASCAR XFINITY Series win (David Reutimann, 2007).