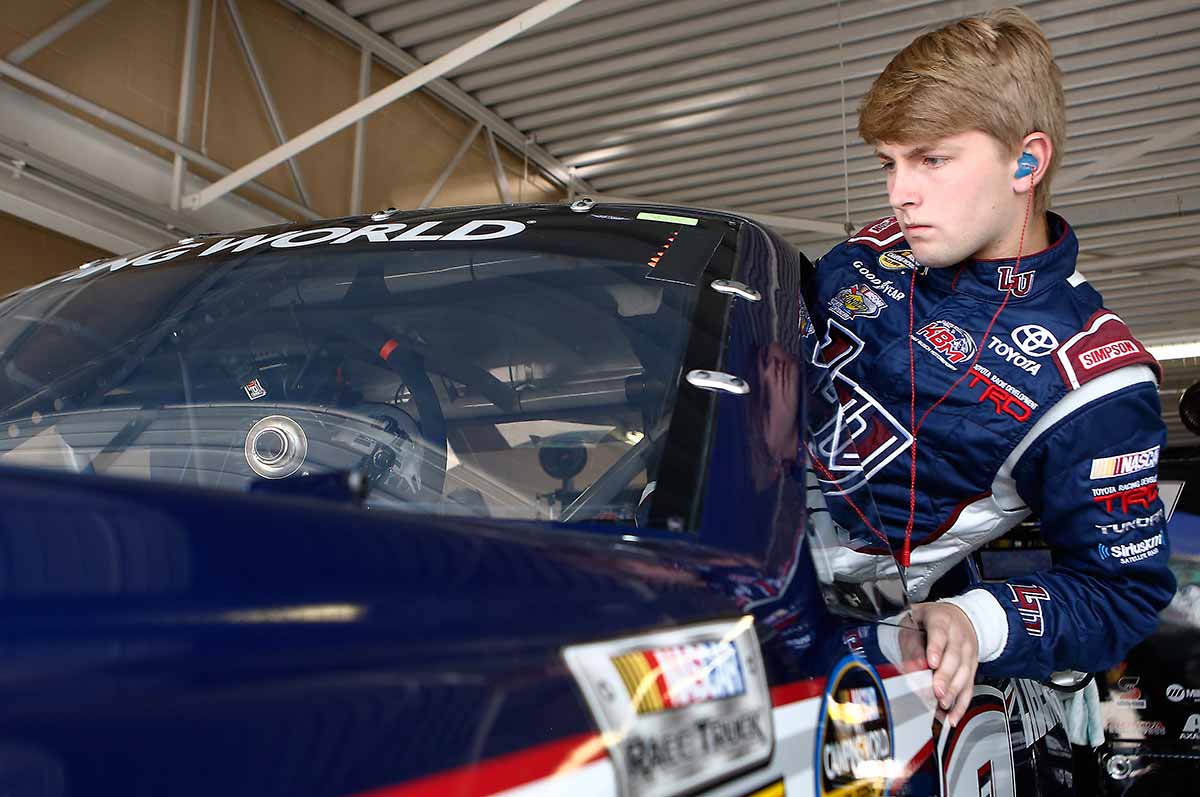 MOORESVILLE, N.C. (May 10, 2016) – So far the month of May is turning out quite well for William Byron. He knew it would be a milestone month with his upcoming high school graduation on May 27, but another milestone happened along the way last weekend at Kansas Speedway when he earned his first NASCAR Camping World Truck Series (NCWTS) win in only his fifth start. Now this weekend he returns to Dover (Del.) International Speedway, where he captured the 2015 NASCAR K&N Pro Series East championship last September.

Byron won the Toyota Tundra 250 at Kansas Speedway last weekend in dramatic fashion. He led 33 laps and had pulled away from the field until a caution came out with three laps to go. He was shuffled back to third on the green-white-checkered restart, but as the top-two trucks tangled coming off turn four, Byron drove by them for the win. Although he wasn’t quite sure how to do a celebratory burnout, he quickly learned that as well, as smoke filled the area around his Liberty University Tundra.

Heading to Dover this weekend also holds fond memories for him. Last fall he captured the K&N Pro Series East championship with a ninth-place finish in the race. Just like he did with the Kansas burnout, he learned on the fly at Dover last year as well. The first lap he turned on the track was the first lap of the race. Mother Nature washed out all practice and qualifying for the K&N Series. Starting from the pole (based on points), Byron led 57 laps of the 125-lap race. Although he did not win, the top-10 finish was all he needed to clinch the title.

So what is more intimidating for Byron: attempting your first burnout in front of thousands of fans, facing down the Monster Mile or walking across the stage to get your high school diploma? Byron will know by the end of May after he accomplishes all the above.

What were the last few days like after your first NCWTS win at Kansas?

“The last few days have definitely been different and exciting to have people congratulating me on the race, whether from school or in the racing community. I’ve just kind of been living on cloud nine for a little bit. Now that I’ve experienced that, I want to win again this week at Dover!”

You won the K&N Pro Series East Championship at Dover last year. Are you excited to go back?

“Dover is a pretty cool place. When I went there last year, my first time on the race track was the first lap of the race. So going back and being able to have practice to wrap my hands around the race track a little bit more will be helpful, but also to have that instant experience I did last year. We had 125 laps of pretty intense racing as I was going for a championship, so I’ll be able to relax a bit more this time and see what we can do.”

Has Kyle (Busch) given you any advice on racing at Dover?

“Kyle reminded us in our competition meeting this week that it will be really aero-sensitive and it’s a tough track to pass. You have to keep your head in the game and be ready for the green-flag runs and restarts, and get those things figured out as best you can so you are in a good position at the end.”

How does your strategy change now that William has won a race?

“I’m excited since William ran at Dover last year without any practice, but he led a bunch of laps and won the K&N championship. Now we’re in the Chase, so that changes our strategy a bit for the upcoming races. We want to learn as much as we can before the Chase starts, and we can go out there and be a little more aggressive at times to maximize our learning to put ourselves in a good place to win more races.”

KBM-031: The No. 9 Liberty University team will race KBM-031, for Friday’s NCWTS 200 at Dover. William Byron raced this truck last month at Martinsville to a third-place finish.