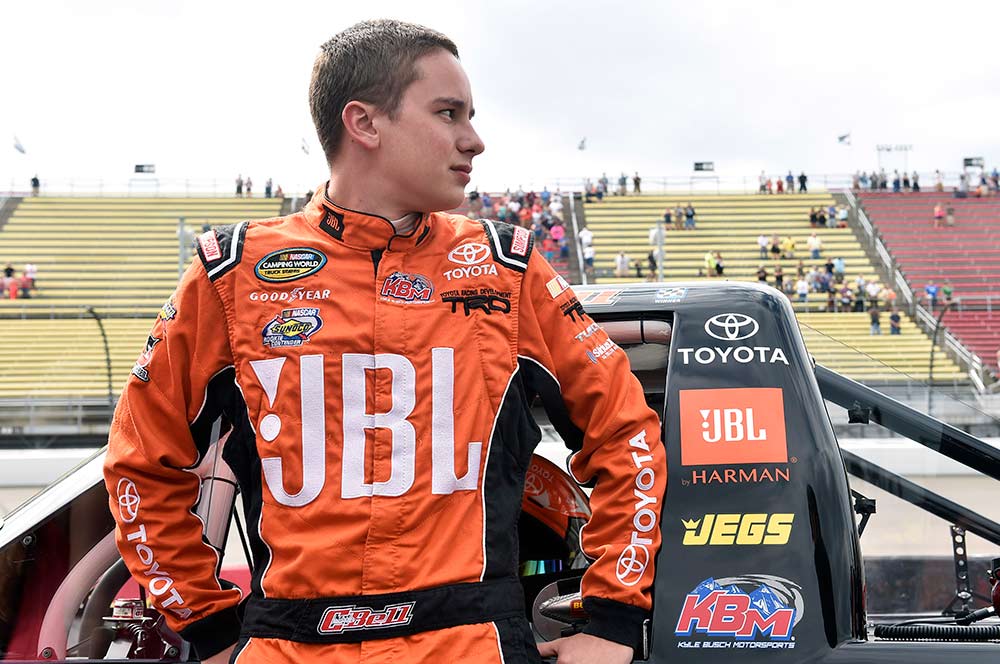 MOORESVILLE, N.C. (Sept. 13, 2016) – Christopher Bell and the No. 4 JBL Tundra team head to Chicagoland Speedway in Joliet, Ill., for the final race before the start of the 2016 NASCAR Camping World Truck Series Chase. Bell is already locked into the inaugural elimination-based playoff format via a win earlier this year at Gateway Motorsports Park in Madison, Ill., but the Oklahoma native will be looking to have a strong run on Friday night and finish out the regular season on a high note.

In order to stay sharp behind the wheel with the Truck Series Chase fast approaching, Bell kept busy during the Truck Series’ hiatus in the schedule last weekend by competing for Venturini Motorsports in the ARCA Racing Series event at Salem (Ind.) Speedway. The talented youngster led 88 of 200 laps and was able to pick up his second career ARCA Racing Series victory and complete the season sweep at the high-banked oval.

With this weekend being Bell’s first time competing at Chicagoland Speedway, he will be able to get extra track time at the 1.5-mile oval by returning to the seat of the No. 15 JBL Tundra for Venturini Motorsports in the ARCA Series race on Thursday night. Including his two wins at Salem, the 21-year-old has finished inside the top 10 in all four of his ARCA starts this season.

In Truck Series action, Bell enters Friday night’s race having posted one win, six top-five and 10 top-10 finishes across 15 starts this season. He has finished inside the top 10 in seven of the last eight events, including top-five finishes in half of those. In five races at mile-and-a-half tracks this season the Sunoco Rookie of the Year contender has led 47 laps while recording two top-five and three top-10 finishes. While he currently sits seventh in the Truck Series championship standings, he ranks inside the top five in several key statistical categories, including: quality passes (first), driver rating (third), fastest laps run (third), laps in top 15 (third), laps led (fourth), average running position (fourth) and green flag speed (fourth).

The statistics show that Bell has what it takes to make it to the final four and compete to win the inaugural Truck Series Chase, but the talented wheelman knows that he must eliminate some of the rookie mistakes that have plagued him throughout the season if he’s going to be the last driver standing at Homestead-Miami (Fla.) Speedway in November. Three of the seven Chase races will take place at mile-and-a-half tracks, so he is focused on having a strong run at Chicagoland on Friday night and being able to carry that momentum into the start of the playoffs next weekend.

Are you looking forward to your first start at Chicagoland Speedway?
“In my time competing in the Truck Series I’ve really enjoyed racing on the mile-and-a-half tracks, so I’m looking forward to getting to Chicago this weekend with my No. 4 JBL team. I enjoy tracks where you can move around and Chicago, with its surface being worn out, looks like it allows you to do that from the film I’ve watched. This will be my first time racing at Chicago, so I’ll also be racing the ARCA race with Venturini on Thursday to get some extra track time. We are coming of a win at Salem in the ARCA car last weekend, so hopefully we can go out and make it back-to-back wins and have some momentum going into the Truck Series race on Friday night.”

You also competed in the ARCA race the day before the Truck Series race at Pocono. Did you find it helpful?
“I think for a young driver like me coming over from the dirt world as I continue to learn about racing on pavement anytime that I can get extra seat time it is very beneficial. While the ARCA car and the truck don’t drive quite the same, it will still be good to go out in ARCA practice on Thursday morning and get acclimated with the track before I get in the JBL Tundra for Truck Series practice Thursday afternoon.”

Do you need to have a strong run on Friday to build some momentum heading into the Chase?
“Of the seven races that make up the Chase three are mile-and-a-half tracks, so that’s almost half of the Chase that we will be racing that style of track. Knowing that, I feel like it’s important to go out and have a good run on Friday night and have confidence in our mile-and-a-half package heading into the Chase. We have had a lot of speed on the intermediate tracks this year, now we just need to make sure we have an uneventful weekend and if we can do that then I’m confident we’ll be near the front competing for the win.”

KBM-39: The No. 4 JBL Racing team will unload KBM-39, for Friday’s American Ethanol E15 225 at Chicagoland Speedway in Joliet, Ill. Bell has posted one top-five and two top-10 finishes with the Tundra this season, including a fourth-place finish the last time he raced it in July at Kentucky Speedway in Sparta.

Baxter’s Truck Series drivers have recorded one top-five and three top-10 finishes resulting in an average finish of 6.8 across four starts. Daniel Suarez led three laps and finished fourth in last year’s Chicago race with Baxter atop the pit box.