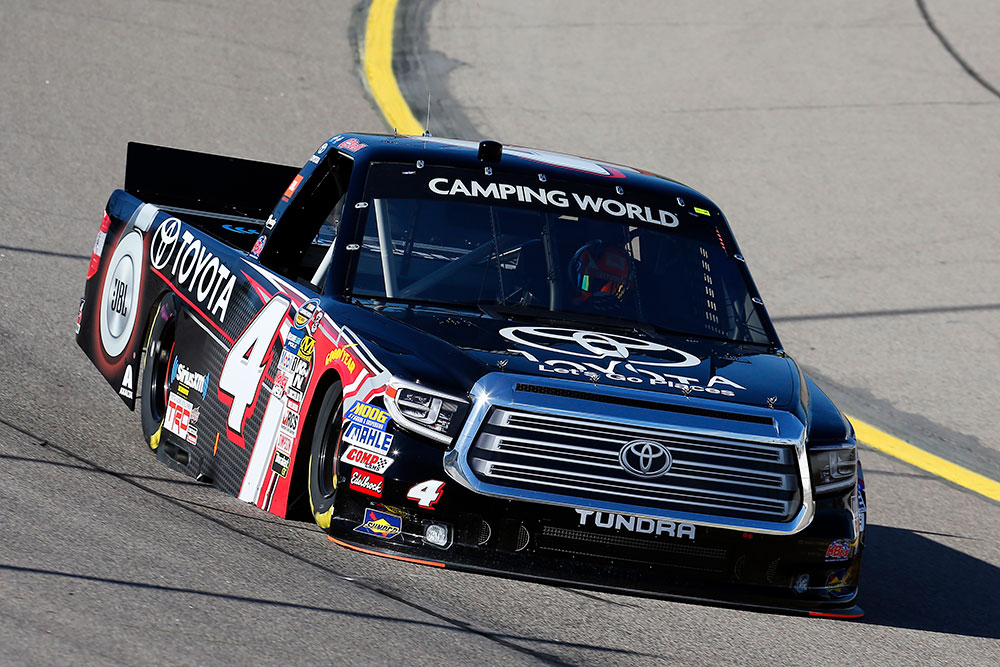 MOORESVILLE, N.C. (July 4, 2017) – With two wins and three poles already in his back pocket in four races this season on mile-and-a-half venues, Christopher Bell is ready to buckle up in his No. 4 Toyota Racing Tundra Thursday night and take on the next 1.5-mile track on the schedule, Kentucky Speedway in Sparta.

At the NASCAR Camping World Truck Series’ first stop at a mile-and-a-half track in 2017, Bell collected the pole and then went on to make history when he became the first driver in one of NASCAR’s top three divisions to sweep all three stages of a race under NASCAR’s new format. He collected poles and top-five finishes at Kansas Speedway in Kansas City and Charlotte (N.C.) Motor Speedway and then came from the 21st starting position to earn the victory at Texas Motor Speedway in Fort Worth.

All together in the four mile-and-a-half races this season Bell has posted an average starting position of 6.0, an average finish of 2.2 and he has been at the front of the field for 38.5 percent (230) of the 598 laps completed on 1.5-mile tracks this season.

When Bell hasn’t been on the pole, at the front of the field or in victory lane, his teammates have been there to fill the void. All together a KBM Tundra has been out front for 75 percent (449/598) of the laps completed at mile-and-a-half tracks in 2017. Owner-driver Kyle Busch earned victories at Kansas and Charlotte and Noah Gragson captured the pole at Texas, giving Kyle Busch Motorsports (KBM) a sweep of poles and checkered flags on 1.5-mile tracks this season. Add in William Byron’s victory from the pole in the 2016 season finale at Homestead-Miami (Fla.) Speedway and KBM has earned both the pole and the win in five straight mile-and-a-half races.

Thursday night KBM brings a four-horse stable to Kentucky for the Buckle Up in Your Truck 225, an event where last season Daniel Suarez collected the pole for the organization and William Byron brought home the victory. Bell is hoping to deliver a repeat performance of Atlanta earlier this year and score a trifecta of stage wins and continue the mile-and-a-half mojo both he and his organization have going on.

Are you looking forward to getting back to a mile-and-a-half track?

“We are strong everywhere we go, but we seem to be elevated from the competition just a little bit more at the mile-and-a-half tracks. Rudy (Fugle, crew chief) won this race with William (Byron) last year and we won at Texas earlier this year – which was a repave – and Kentucky has been repaved again, so I feel like we should be pretty stellar on Thursday night and have a good shot to put our Toyota Tundra in victory lane.”

You won at Texas, which was a repave, will that translate over to Kentucky?

“I’d say now that they resurfaced turns one and two at Texas, they resemble Kentucky quite a bit. Turns three and four at Texas are a lot faster than they are at Kentucky. Kentucky is a slower mile-and-a-half because it’s not very banked, but it has a lot of grip because of the repave. I’m confident that we will unload with a fast Tundra for practice on Wednesday and have three practices to get it ready for qualifying and the race. Kyle (Busch) is always tough to beat when he’s in the trucks, but we did it earlier this year at Atlanta and I’m confident we can do it again this week.”

How beneficial is it having Kyle as a teammate?

“This week will be especially helpful having Kyle in one of our Tundras because we have data on the trucks for practice, so we’ll be able to compare the data from our truck to his. His feedback is so crucial, and so critical, that he’s able to help make all of our trucks a lot better.”

KBM-28: The No. 4 Toyota Tundra team will unload KBM-28 for Thursday night’s Buckle Up in Your Truck 225 at Kentucky Speedway. It is the same Tundra that Bell led 99 laps and finished fifth with in the Truck Series’ most recent event at Iowa Speedway in Newton on June 23.

The Fugle File:
Ryan “Rudy” Fugle begins his fourth season as a crew chief at KBM and sixth overall with the organization.  The New York native has guided his team to an Owner’s championship in all three of his seasons (2013, 2015 & 2016) atop the pit box at KBM, including a combined Owner’s/Driver’s Championship with Erik Jones in 2015. His drivers have combined for 18 wins, 12 poles and 39 top-five finishes across his 77 races calling the shots for the organization. Under his tutelage last season, William Byron collected a Truck Series’ rookie record seven wins while leading the No. 9 Tundra team to KBM’s fourth consecutive and fifth overall Owner’s championship.
Fugle’s NCWTS drivers have posted one win, 167 laps led, three top-five and three top-10 finishes resulting in an average finish of 2.0 across three starts in the Bluegrass State. William Byron led a race-high 70 laps en route to the victory in last year’s event.
Share this post
Share on FacebookShare on Facebook TweetShare on Twitter