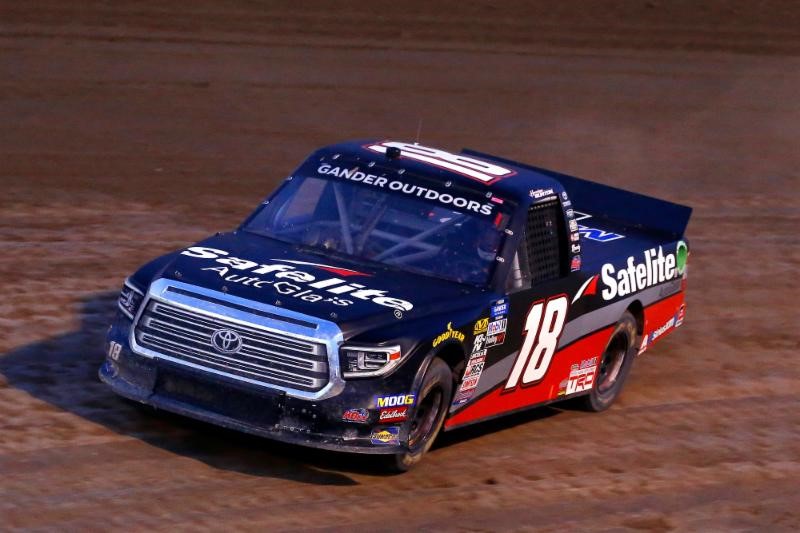 Harrison Burton entered Thursday night’s Eldora Dirt Derby at Eldora Speedway 13 points behind the cutoff line for the final playoff spot in the NASCAR Gander Trucks Series Playoffs with two regular season races remaining, but left Eldora in a must-win situation heading into next week’s regular season finale at Michigan International Speedway in Brooklyn. After getting caught up in the middle of a 14-truck melee halfway through Stage Two, the Safelite Tundra spent 23 laps on pit road getting major damage repair and would finish the race in the 31st position.

Stewart Friesen captured a playoff spot when he became the sixth Gander Trucks Series regular to win in the regular season and playoff contender Matt Crafton distanced himself from Burton in points by finishing in the top 10 of all three stages.

Rough Night. Talk about what happened to get all the damage.

“I’m not sure what happened. There was a wreck in front of me and no one could stop. I piled into it and then someone piled in behind me. It happens, so we will move on. (Stewart) Friesen won the race anyway, who was the closest driver to us in points, so now we just have to go to Michigan and win and lock ourselves in. This is the moments that you live for as a racecar driver – when your backs against the wall and you have to make something happen. We’re going to work our butts off for Michigan and hopefully get us a win.”

Burton fell to the sixth spot in the Gander Trucks driver point standings. After 15 races he finds himself 116 tallies behind points leader Grant Enfinger and 64 points behind Matt Crafton for the eighth and final playoff spot, leaving him in a must-win situation next week at Michigan.

Burton will be behind the wheel of the No. 18 Fields/Sports Force Parks Tundra when the NASCAR Gander Outdoors Truck Series resumes action Aug. 10 at Michigan. Live coverage of the Corrigan Oil 200 begins Saturday at 1 p.m. ET on FS1.