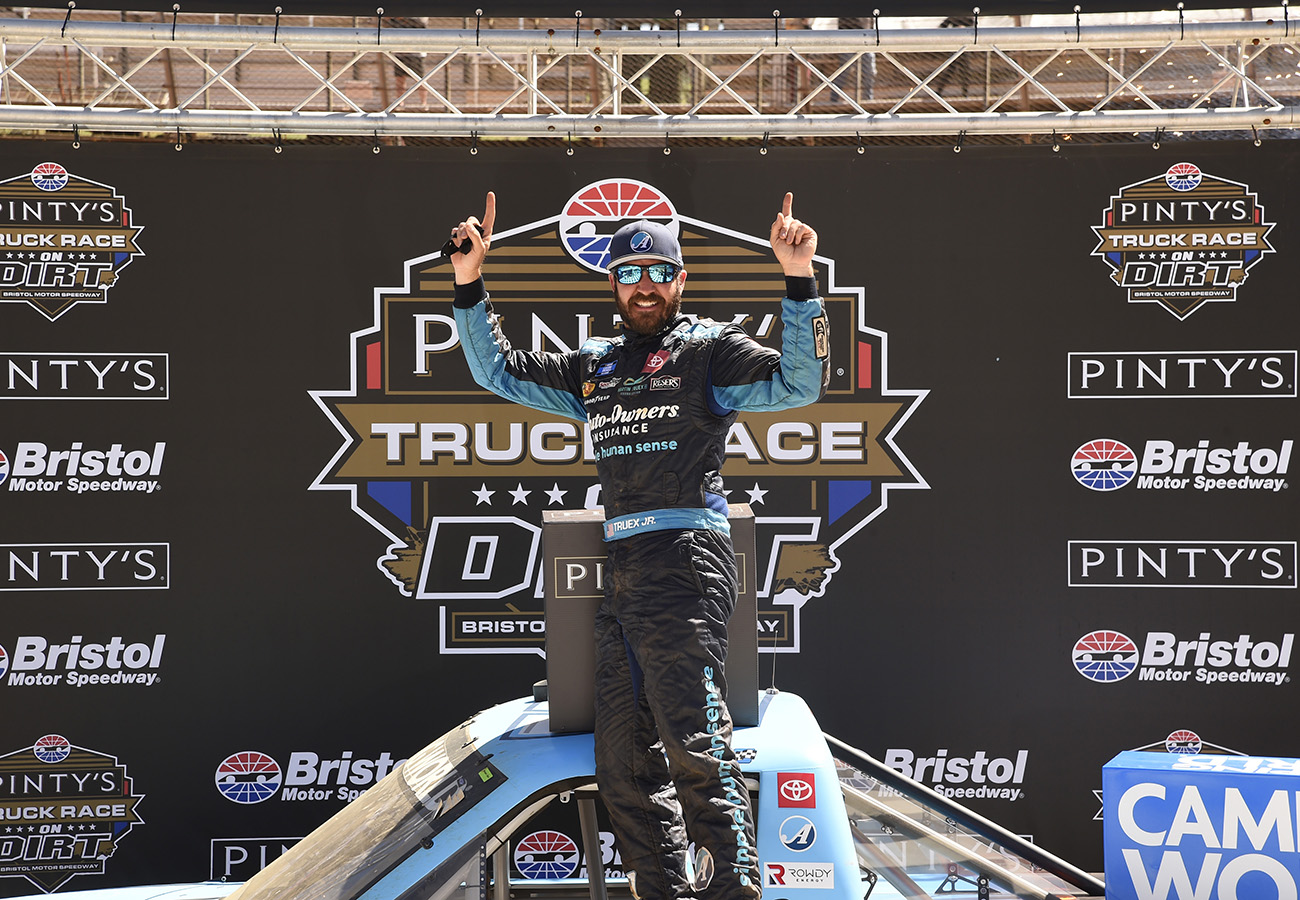 In just his third career NASCAR Camping World Truck Series start, Martin Truex Jr. scored his first career victory on the dirt at Bristol Motor Speedway in the No. 51 Auto-Owners Insurance Tundra. Truex dominated the day, leading 105 of the 150 laps and winning both Stage One and Stage Two.

How exciting was that Martin?

“It’s unbelievable really. I guess they had to put dirt on Bristol to get me back into victory lane here. It’s been a long time. That was a blast. I’m still really surprised. I wanted to run this race so I could get more experience for the Cup car, and then we got out there in practice and it felt really good and I was having a lot of fun, so I just kept trying to work with the guys and tell them what I needed, and just thanks to Auto Owners, Noble Aerospace, Toyota, TRD, everybody at KBM (Kyle Busch Motorsports) for letting me drive this thing and putting this deal together. That was a blast. I kept thinking, ‘what’s going to happen next, am I going to get a flat tire or something stupid?’ This 51 is pretty much used to finishing in victory lane, so a lot of pressure there, so I’m glad we could get it done.”

Did you expect to win here today?

“You always expect to win when you come to the racetrack. I’m pleasantly surprised to say the least. We came here this weekend and I wanted to run this truck just to get some experience and try to help with the Cup car. Who would have thought that I would get my first Truck Series victory on dirt. Really happy for the opportunity. Thankful to Auto Owners Insurance, Noble Aerospace and obviously Kyle (Busch, team owner) and everybody at KBM (Kyle Busch Motorsports) for putting this deal together and letting me do this – Toyota, TRD. This was a lot of fun. We weren’t supposed to come here and win. That’s really the icing on the cake. Now I’ve got my truck win that I’ve been thinking about wanting to go after. Really, really cool and still a little bit surprised. What an awesome job these guys did with this truck. Made the right adjustments for today. I told them a few things I wanted to change from practice, he (Marty Lindley, crew chief) changed a few things himself. Marty Lindley (crew chief), he’s an old veteran. He did a heck of a job and that was a lot of fun.”

How did reality differ from your initial expectations of how this race would go?

“I really just had an open mind about it. I thought that any time we go and do something new and different, it’s always fun. Even though I don’t have a lot of experience doing this, I looked at it as, ‘Hey, Bristol hasn’t been a great place for me anyway, let’s put dirt down and see how it goes.’ The little time I’ve spent in dirt vehicles, which is not much at all, I really enjoyed myself. That was one thing I was looking at and thinking. Every time I got on dirt in something, I had a lot of fun. I just approached this weekend as let’s go have some fun, let’s try to figure it out as quickly as we can and that’s why I ran the truck. Clearly, we had a good truck and we figured it out and here we are. Just a blast and thankful for everybody for making it happen.”

After five races, the No. 51 team sits first in the owner’s championship standings.

The No. 51 hits the track with Kyle Busch when the NASCAR Camping World Truck Series resumes action on Saturday, April 17 at Richmond (Va.) Raceway. Live coverage will be on FS1, Motor Racing Network and SiriusXM at 1:30 p.m. ET.