Luck Runs Out For Todd Gilliland and the No. 4 JBL Tundra Team in the Irish Hills 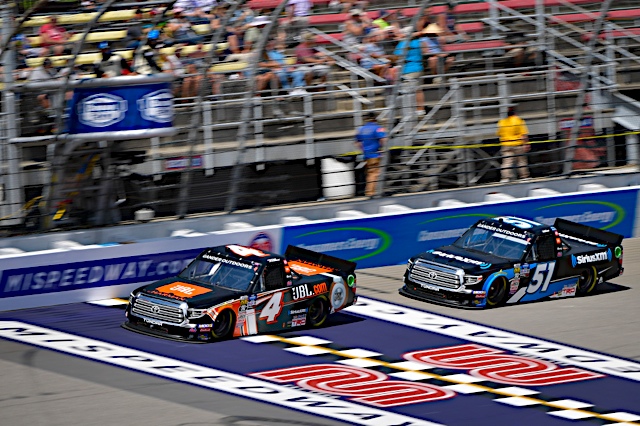 Todd Gilliland and the No. 4 JBL team had a top-five run spoiled by a late-race accident at Michigan International Speedway on Saturday. In two NASCAR Gander Outdoors Truck Series practice sessions on Friday, Gilliland posted the 10th-fastest lap in the first practice and was 16th-fastest in final practice. In one round of single-truck qualifying on Saturday morning, Gilliland earned the fourth starting spot for the Corrigan Oil 200.

Saturday afternoon, entering the race in a must-win situation for the NASCAR Playoffs, Gilliland was strong through Stages One and Two, despite a penalty after the first pit stop. In the third stage, he led for 14 laps. With two laps remaining in the scheduled distance, Gilliland was poised to make a final run for the win when he was caught up in a multi-truck wreck and forced to retire from the race.

Todd Gilliland, driver of the No. 4 JBL Tundra for Kyle Busch Motorsports:

“Today was an up and down race. We qualified better than I expected, and pretty much our JBL Tundra handled better than it did yesterday the whole race. Just battled really, really loose from the time I turned off the wall all the way to the center, and then from the center to the exit wall I was too tight. We made a lot of adjustments to tighten it up, but it mainly just hurt my exit and didn’t help my entry to center. It’s just going to be about being smooth from here on out, there’s still seven races left and someone’s got to win all of them, and we need to shift our focus to that and keep taking the positives about every week.”

Christian Eckes, driver of the No. 51 Toyota Tundra, finished 15th

Gilliland finished the regular season seventh in the point standings. Following the points reset for the Playoffs, Gilliland and the No. 4 team rank 11th in the Gander Trucks Driver Championship Standings following the 16th race of the season, and have been eliminated from the NASCAR Gander Outdoors Truck Series Playoffs.

Todd Gilliland and the No. 4 Mobil 1 team will return on Thursday, August 15 at Bristol Motor Speedway. Live coverage of the UNOH 200 presented by Ohio Logistics begins at 8:30 p.m. EST on FS1.