Looking to Put Bookends on the Truck Series Record Book 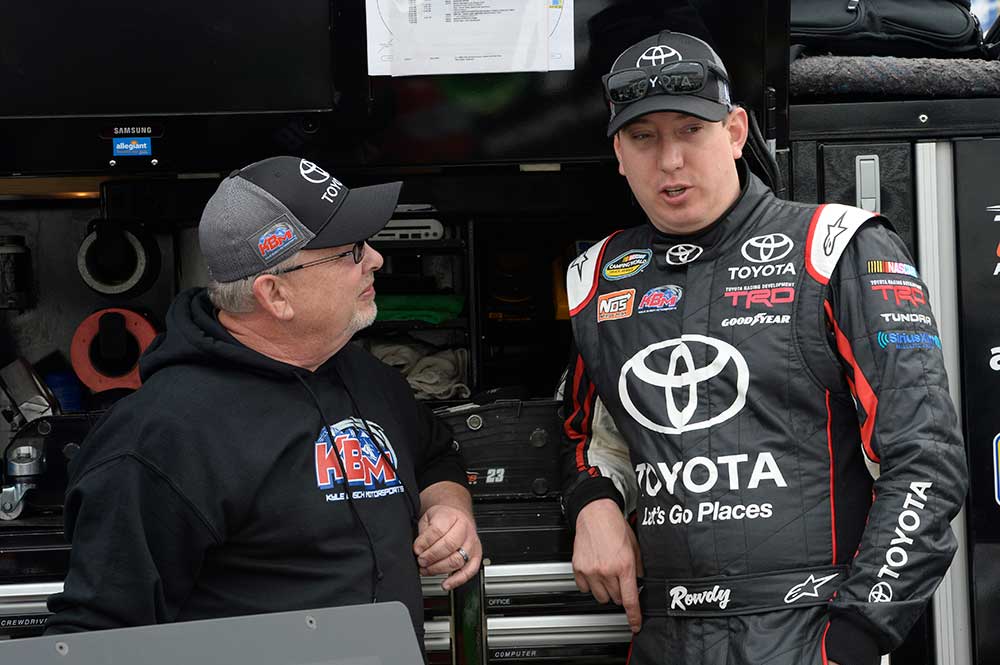 MOORESVILLE, N.C. (July 5, 2016) – Owner-driver Kyle Busch returns to the NASCAR Camping World Truck Series for Thursday night’s Buck Up In Your Truck 225 at Kentucky Speedway in Sparta. Busch will pilot the No. 18 Tundra alongside teammates Christopher Bell, William Byron and Daniel Suarez as the Kyle Busch Motorsports’ (KBM) quartet looks to collect the organization’s 51st victory in NASCAR’s third division and become the winningest team in Truck Series history.

While KBM has become the premier team in the Truck Series, the road to the top didn’t have its share of bumps. The first roadblock to the team’s success came before it reached the track for the first time, when primary sponsor Miccosukee backed out of its deal to sponsor one of the team’s two trucks. Busch was forced to race more than originally scheduled in the No. 18 Tundra due to a lack of sponsorship and then just seven races into the inaugural season the team’s second truck shut down when its driver left to compete in what was then the Nationwide Series.

Busch was able to capture the team’s first win on April 2, 2010 at Nashville (Tenn.) Superspeedway in just the fourth race of the season. He went on to win in eight of his 16 starts that year and helped KBM become the first team to win an Owner’s Championship in its debut season since the series originated in 1995.

With sponsorship for up-and-coming drivers tough to find, Busch continued to have to get behind the wheel himself more than he intended to when he started the team or find other NASCAR Sprint Cup Series drivers to put in the truck to attract sponsors. Of the team’s first 25 wins from 2010 to 2013, the Las Vegas native collected 19 of them, Denny Hamlin won twice and Kasey Kahne once. Late in the 2013 season, Darrell Wallace Jr. delivered his historic win at Martinsville (Va.) Speedway and it marked the start of the evolution of KBM into what Busch envisioned — a team that provides talented young drivers with an opportunity to spearhead their careers.

While Busch accounted for 19 of the team’s first 25 victories, he has contributed just 10 of the last 25 wins and three of the last 10. The last three seasons, the team has seen a youth movement with Busch still running a handful for races while mentoring young guns Erik Jones, Darrell Wallace Jr., Daniel Suarez, Christopher Bell, William Byron and Cody Coughlin.

Busch, who delivered the team’s first win in 2010, will now attempt to collect the team’s 51st victory on Thursday night and put bookends on team’s path to the record books. He knows that this may be his only attempt, because at the rate his young drivers are winning one is likely to get another victory before his next scheduled start at Bristol (Tenn.) Motor Speedway in August.

Kyle Busch, driver of the No. 18 Toyota Tundra:

You participated in the Sprint Cup Series tire test at Kentucky. How do you think the Truck Series race will play out?
“It will be just like any other race on a repave — there are going to be a lot of unknowns and a lot of different variables. With the reconfiguration of the track — the paving, banking, angle changing in one and two versus three and four, you basically have a whole new race track. I think it’s going to be a benefit running all three races this weekend so I can learn to understand the nuisances of the new configuration and learn how to pass on a single-groove race track.”

Wes Ward, crew chief of the No. 18 Toyota Tundra:

How important will it be to have a veteran driver on a freshly paved track?
“It’s probably going to be different than the past few races at Kentucky. From everything we heard from Kyle taking part in the Sprint Cup Series test there, it’s going to be the same that you face at other repaves where it is going to be really hard on tires. I anticipate that once we get there and all three divisions lay some rubber down it should be ready to race on Thursday night. The good thing with Kyle running all three series this weekend is that he’ll have four XFINITY practices and a Cup practice on Thursday before our race and he’ll have a good hand for how much the track has changed since our practice on Wednesday.”

KBM-037: The No. 18 Toyota Racing team will unload chassis KBM-037, for Thursday night’s Buckle Up In Your Truck 225 at Kentucky Speedway in Sparta. It will be the Tundra’s maiden voyage.

The ‘Ward’en:
Veteran crew chief Wes Ward is currently in his second season at Kyle Busch Motorsports, where in addition to overseeing the efforts of the No. 18 team’s part-time schedule this season, he serves as the shop foreman. Ward picked up his first Truck Series victory with Kyle Busch behind the wheel at Martinsville (Va.) Speedway earlier this season. The North Carolina native became a fixture in the NASCAR XFINITY Series garage beginning in the late 1990’s and over the course of 16 years called the shots for over 300 races working with notable drivers such as Dale Jarrett, Kasey Kahne, Kenny Wallace, Jason Keller and Brad Keselowski. Ward’s lone XFINITY Series win came with Kahne behind the wheel in the 2003 series finale at Homestead-Miami (Fla.) Speedway.

Ward’s best result across nine NASCAR XFINITY races atop the pit box at Kentucky was a fifth-place result in June of 2007 with Shane Huffmann, who now serves as the crew chief of the No. 17 Tundra in the Truck Series.