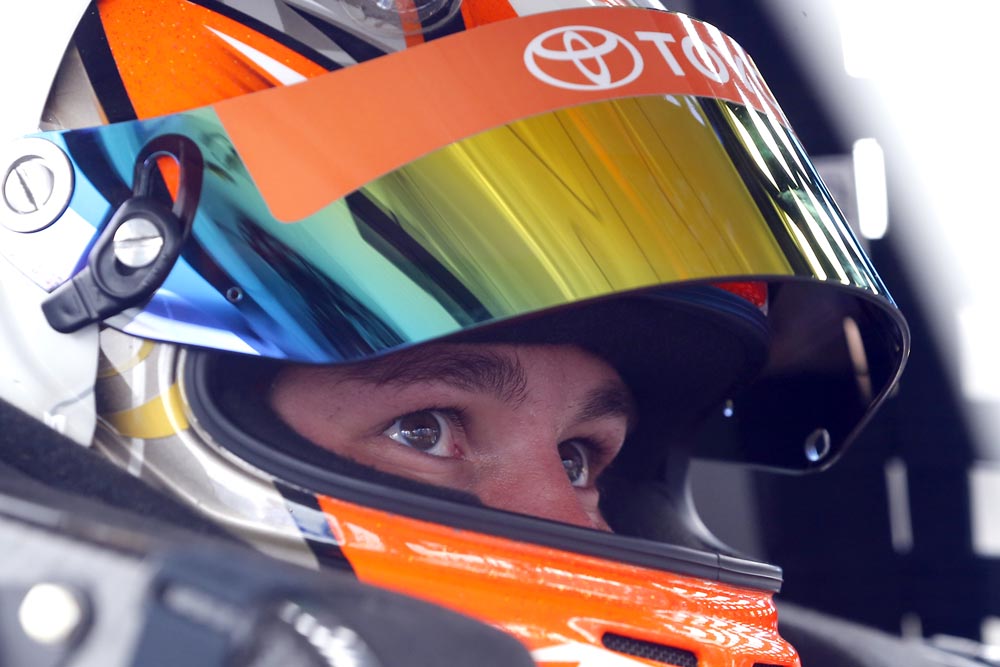 MOORESVILLE, N.C. (Nov. 14, 2017) – In his second full-time campaign in the NASCAR Camping World Truck Series Christopher Bell has put together a season that ranks among the greats in series history. The 22-year-old driver will be looking to cap off his spectacular season by capturing his first NASCAR championship in Friday night’s Truck Series season finale at Homestead-Miami (Fla.) Speedway.

After winning one race and finishing third in the Truck Series championship standings a year ago, Bell returned with a vengeance in 2017. Since capturing the pole and sweeping all three stages in the second race of the season at Atlanta Motor Speedway in Hampton, Ga., the dirt stalwart turned pavement prodigy has been widely considered the favorite to capture this year’s crown and he’s done nothing to sway public opinion throughout the course of the year. Entering Friday’s championship race, the Oklahoma native leads NASCAR’s third division in nearly every major statistical category, including wins (five), poles (five), top-five finishes (14), top-10 finishes (20), driver rating (118.5), average starting position (4.6), average finish (5.9), average running position (5.9), laps led (865) and fastest laps run (419).

Three of Bell’s wins this season have come on mile-and-a-half tracks and a fourth came at Pocono Raceway in Long Pond, Pa., a unique 2.5-mile track where many teams race the same trucks and similar setups to what they do at the 1.5-mile venues. Pocono happens be the last place that the No. 4 team raced the Tundra that they will unload for Friday night’s championship race, KBM-38. “38 Special” was victorious at Pocono in July and also was Bell’s winning chariot at Atlanta in February, as well as in June at Texas Motor Speedway in Fort Worth. It also happens to be the same Toyota that William Byron won from the pole with in last year’s season finale at Homestead.

If Bell win’s Friday night’s Truck Series championship, and does so by finishing eighth or better, he’ll join elite company as one of four drivers in the history of the series who won the championship with an average finish below 6.0. 2018 NASCAR Hall of Fame nominee Ron Hornaday Jr., accomplished the feat twice (1996 and 2007), and is joined in the club by Mike Skinner (1995) and Greg Biffle (2000).

How do you feel heading into the Championship 4 Friday night?

“To be able to make it to the Championship 4 two years in a row and have another shot to bring home a championship to Kyle Busch Motorsports is something I’m really proud of. It will be kind of a bittersweet weekend for me — it’s the end of a long run at KBM, but it’s been a great one and I’m thankful for all the people that I’ve met and the relationships I’ve built. Winning a championship on Friday night for everyone at KBM, Toyota, Toyota Racing Development and JBL — all the people that were there when I started my run in the Truck Series in 2015 and have helped me be in the position I am — would be a great way to end this chapter of my career.”

How do you feel that your team stacks up against the other three teams in the Championship 4?

“I think everyone on this No. 4 JBL team is as prepared as we can be. Overall, if you look back on the season, I think we’ve shown the most speed in the Truck Series, and week in and week out we’ve been the best team. I’ve always enjoyed Homestead and Rudy (Fugle, crew chief) has been really fast there the last few years. If we can just go out and focus on what has gotten us to this point, I think we should be in good shape. Regardless of the outcome, it’s been an amazing season.”

How do you feel about your team’s chances to bring home another championship to KBM?

“KBM has been really good at Homestead since they came into the Truck Series, so I’m definitely excited about our chances to bring home another championship. We are bringing a Tundra that we feel is our fastest truck — it’s had a lot of success on the intermediate tracks including a win at Homestead last year. Our goal all year has been to go out and win this championship and we’ve worked hard all year to get to put ourselves in this situation. Our team definitely has the most experience in these situations — now we just have to go out and execute.”

KBM-38: The No. 4 JBL Racing team will unload KBM-38, for Friday night’s championship race at Homestead-Miami (Fla.) Speedway. Bell has won three times in four starts driving “38 Special” this season. It is also the same Toyota that William Byron won from the pole with in last year’s season finale at Homestead.

Ryan “Rudy” Fugle begins his fourth season as a crew chief at KBM and sixth overall with the organization.  The New York native has guided his team to an Owner’s championship in all three of his seasons (2013, 2015 & 2016) atop the pit box at KBM, including a combined Owner’s/Driver’s Championship with Erik Jones in 2015. His drivers have combined for 21 wins, 14 poles and 47 top-five finishes across his 90 races calling the shots for the organization. Under his tutelage last season, William Byron collected a Truck Series’ rookie record seven wins while leading the No. 9 Tundra team to KBM’s fourth consecutive and fifth overall Owner’s championship.

Fugle’s NCWTS drivers have posted two wins, one pole, 93 laps led, two top-five and three top-10 finishes resulting in an average finish of 2.7 across three starts at Homestead. Fugle won last year’s event from the pole with William Byron and in 2013 was victorious with owner-driver Kyle Busch. Both victories secured Owner’s championships for KBM.