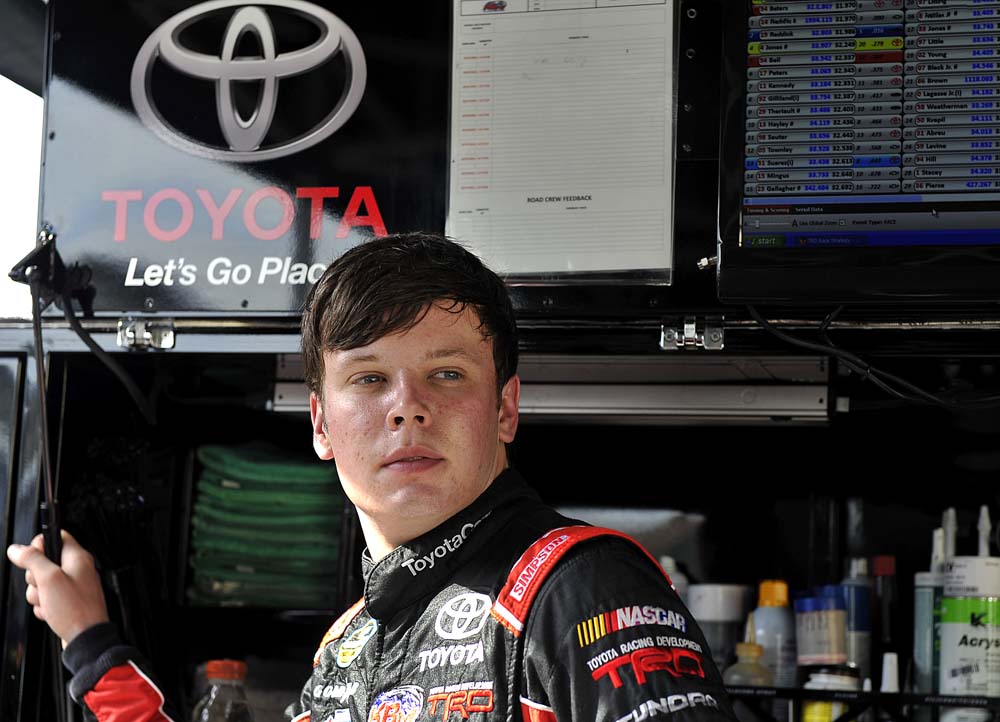 MOORESVILLE, N.C. (June 22, 2016) – After much success in Late Model racing in the recent month, Cody Coughlin was left with a tough decision. With a race at his home track conflicting with his regularly scheduled NASCAR Camping World Truck Series start at Gateway Motorsports Park in Madison, Ill., the young driver was forced to decide between continuing his quest to become the only driver in history to win championships in both the CRA Super Series (Super Late Model) and CRA/JEGS All-Star Tour (Pro Late Model) in the same year or make his fourth of 11-scheduled starts this season for Kyle Busch Motorsports.

After discussing the weekend itinerary, Kyle Busch Motorsports, Joe Gibbs Racing and Coughlin agreed that the 20-year-old driver will concentrate on his quest for a pair of Late Models championships and not compete in the NCWTS event at Gateway. Pinch hitting for Coughlin this weekend behind the wheel of the No. 51 JEGS/Auburn Gear Tundra will be 2015 NASCAR Camping World Truck Series champion Erik Jones.

Jones has been fast and challenged for wins each of the last two years at Gateway, but victory has eluded him. In 2014, the talented youngster made his way to the front in the closing laps, but got turned from behind coming out of Turn 2 with six laps remaining and was left with a disappointing 23rd-place finish. Last year the Michigan native captured the pole and led a race-high 84 laps, but while he was running second late in the race chasing down leader Matt Crafton he made contact with a lap truck caused electrical issues and relegated him to another 23rd-place finish.

Earlier this season, the St. Louis Cardinals became the first team in major league history to record three pinch-hit home runs in a single game. Within a stone’s throw of the Cardinals home ballpark, Jones is hoping to follow suit this weekend and hit a pinch-hit home run for Cody Coughlin and the No. 51 JEGS Racing team and deliver KBM its record-tying 50th Truck Series victory.

Cody Coughlin, driver of the No. 51 NCWTS JEGS Tundra:

“We’ve really picked up a lot of momentum recently and winning championships in both series would be an honor. When we began the season we didn’t plan on competing full-time in both series, but with our success and with the blessing of both KBM and JGR, we have decided to challenge for the titles. I am thankful for the cooperation from everyone to allow me to do this and I am looking forward to racing with KBM in several NASCAR Camping World Truck Series races throughout the remainder of the year.”

Erik Jones, driver of the No. 51 NCWTS JEGS/Auburn Gear Tundra:

How does Gateway compare to the other flat tracks that you’ve raced at in the Truck Series?
“It reminds me a little bit of Phoenix in both sets of turns. It’s a place I took a liking to after making my first laps there in 2014. We were really fast there the last two years, just didn’t have good endings. It’s always tough to pass there, so you need to qualify well and keep good track position if you are going to get a win.”

Each set of turns are unique at Gateway. Which end is the toughest to maneuver through?
“Things are a little bit tighter down in Turns 1 and 2 and it’s more of a finesse corner compared to Turns 3 and 4, where it seems like you can find a way to get through that end no matter what your truck’s doing. You have to be able to get under somebody off the exit of Turn 2 to be able to pass them down in Turns 3 and 4, so we will work pretty hard on getting our JEGS Tundra to turn the center in Turns 1 and 2 in order to get our truck the best we can to maneuver and pass.”

KBM-33: The No. 51 JEGS/Auburn Gear Racing team will unload chassis KBM-33 for Saturday’s Drivin’ for Linemen 200 at Gateway Motorsports Park. The Tundra had a quick turnaround after earning a sixth-place finish with Daniel Suarez last weekend at Iowa Speedway in Newton. Suarez also piloted the Toyota to the No. 51 team’s season-best second-place finish at Dover (Del.) International Speedway in May.