Looking to Harvest a Chase Spot 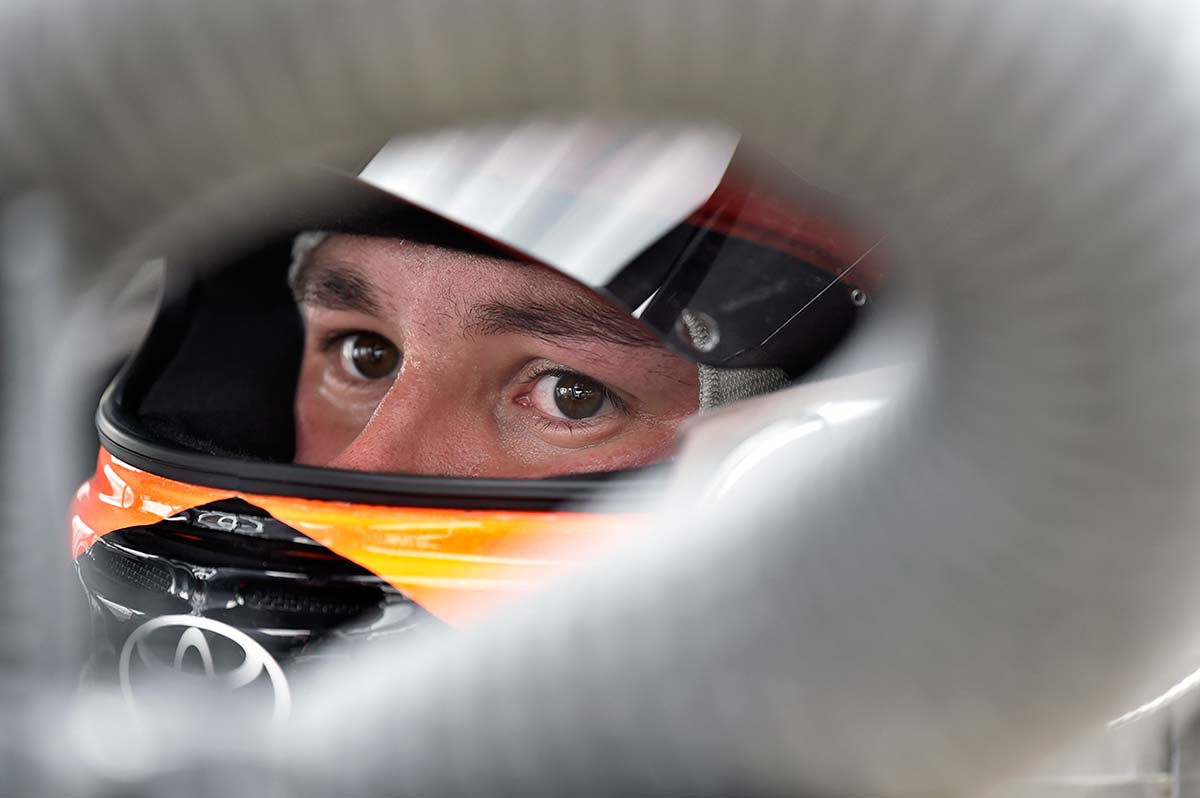 Last year the rosy cheeked 20-year-old turned heads with a solid performance in his National Series debut at Iowa. Bell familiarized himself with the feel of his Tundra turning 66 laps in the lone practice session, where he ended up second on the leaderboard behind his Kyle Busch Motorsports’ (KBM) teammate and eventual race winner Erik Jones. He was once again second to Jones in the first of three rounds of knockout qualifying, but slipped to sixth in the second round and ended up qualifying 10th.

Come race time, the open-wheel dirt standout ran inside the top 10 for all but a 20-lap stretch from lap 50-70 after the team’s first-scheduled pit stop of the day. Bell restarted from the eighth position with 36 laps remaining in the event and quickly maneuvered his way up to the fourth spot. He battled side-by-side for several laps trying to hold off two-time Truck Series champion Matt Crafton in the closing laps, but eventually surrendered the position and ended the day with an impressive fifth-place finish.

At the time Iowa was the only race on Bell’s Truck Series schedule, but a strong showing in his debut earned the Oklahoma native six more starts last season. The talented wheelman rewarded the powers to be by bringing home a victory in just his third career start last July at Eldora Speedway in Rossburg, Ohio. Overall in seven starts he posted one win, two top-five and three top-10 finishes en route to an average finish of 11.9.

Bell’s performance in a part-time schedule last season earned him a full-time gig behind the wheel of the No. 4 Tundra in 2016. The talented wheelman has shown the speed necessary to compete for wins and be a championship contender, but has also experienced a handful of misfortunes so far this season. He enters this weekend with two top-five and three top-10 finishes across the first seven races, but has failed to finish twice, including a 32nd-place finish last week at Texas Motor Speedway in Fort Worth.

With nine races remaining before the inaugural NASCAR Camping World Truck Series Chase, Bell is looking to celebrate the anniversary of his debut by earning a trip to victory lane at Iowa on Saturday and harvesting one of the eight spots in the elimination-based playoff format.

What do you remember about your Truck Series debut at Iowa last year?
“I remember that Iowa was a good track to get my feet wet at. I had already been there in a K&N car, so I wasn’t showing up to a brand new track, but I was surprised and how different the trucks drove there than the K&N car. The track was big enough that I was able to learn some of the aero situations, but the speeds weren’t overwhelming. Being able to learn a little about the aero of the trucks turned out to be a big help when I got to Kentucky for my second race when practice and qualifying were washed out and I had to just line up and race without ever making a lap around a mile-and-a-half track.”

Having raced at Iowa twice last year, is this the pavement track on the Truck Series schedule you feel most comfortable at?
“Being that I competed there twice last year, it definitely has more of a hometrack feel to it. In the K&N race last year we were able to run a higher line than we did in the Truck Series race, so I’m anxious to see with the XFINITY Series also on track with us this weekend if it puts more rubber down and widens out the groove. In the K&N race I picked up a lot of positions at the end of the race running a higher line than everybody else, so hopefully we’ll be able to move around more this weekend than last year.”

Last year it was your first time in a truck and you finished fifth. Do you feel like you can compete for the win this time around?
“Having a little seat time at Iowa already, I do feel a little sharper heading into this weekend’s race. When you drive for Kyle Busch Motorsports and have a team like I do with Jerry (Baxter, crew chief) and all of my guys, I feel like every time I get behind the wheel of my No. 4 Tundra I can go out and compete for the win — no matter what track we are at.”

Is there a track on the Truck Series schedule that is similar to Iowa?
“No — Iowa is a pretty unique track. It’s less than a mile in length, but it is very aero dependent. Christopher raced there twice last year, once in the K&N Series and once in the Truck Series, and had solid runs both times. I went with him to the K&N race and that was the only one of his truck races last year that he was with us on the 51 team, so we have some good notes and he should have a good feel for what he needs to get around there. We’re bringing KBM-19, which is the same Tundra that he finished third with at Dover last month. It’s one of those trucks that just seems to have something about it. Bubba (Darrell Wallace, Jr.) won with it at Homestead back in 2014 and it was his favorite truck. Daniel finished second with it twice last year and it was his favorite truck as well. I expect it’ll be fast at Iowa and hopefully we can bring home a win and work towards getting in the Chase.”

KBM-19: The No. 4 Toyota Racing team will unload chassis KBM-19 for Saturday’s Speediatrics 200 at Iowa Speedway in Newton. The Tundra has seven top-five finishes in 11 career starts, including a win with Darrell Wallace Jr. at Homestead-Miami (Fla.) Speedway in the 2014 Truck Series finale. Bell recorded a season-best third-place finish with this chassis last month at Dover (Del.) International Speedway.

The Book on Baxter:
Veteran crew chief Jerry Baxter is in his fourth season atop the pit box for KBM. Since joining KBM, Baxter’s drivers have posted seven wins, three poles, 1218 laps led, 26 top-five and 42 top-10 finishes across 73 starts. The California native spent the 2015 season calling the shots for KBM’s No. 51 team, which collected two wins, 10 top-five and 14 top-10 finishes with drivers Daniel Suarez (12 starts), Matt Tifft (six starts), Kyle Busch (three starts), and Christopher Bell (one start) behind the wheel. In addition to his seven wins at KBM, he boasts one other Truck Series win (Cale Gale, 2012) and one NASCAR XFINITY Series win (David Reutimann, 2007).

Baxter’s Truck Series drivers have produced three top-five and four top-10 finishes resulting in an average finish of 10.3 across six starts in the Hawkeye State. He guided Christopher Bell to a fifth-place finish in his Truck Series debut at Iowa last year.