Looking to Double Down in the Eldora Dirt Derby 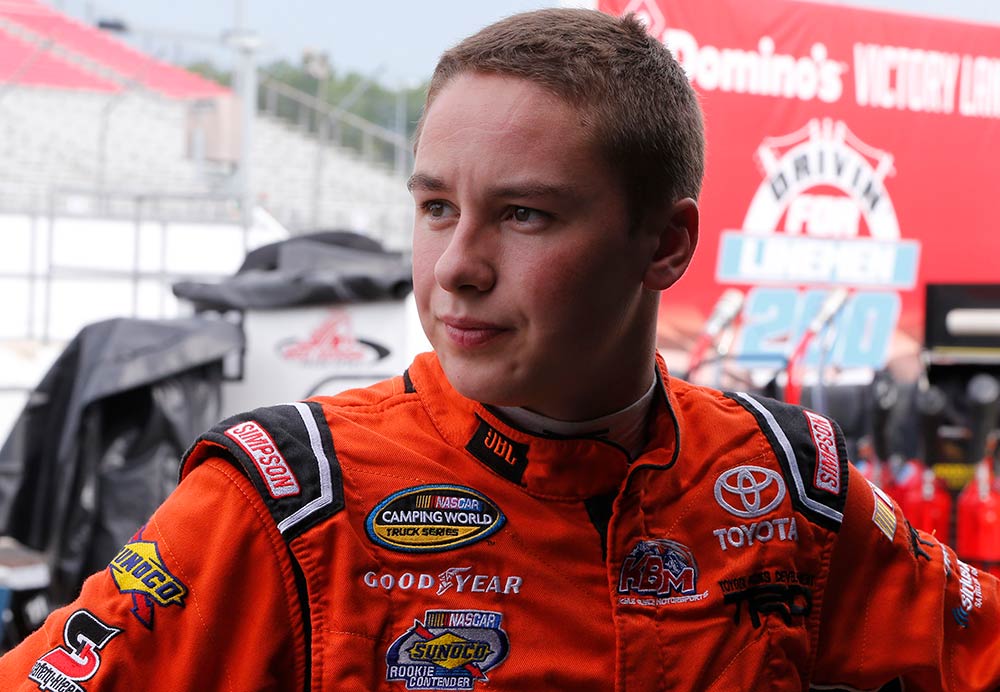 MOORESVILLE, N.C. (July 18, 2016) – In just his third career NASCAR Camping World Truck Series start, open-wheel dirt standout Christopher Bell led a race-high 106 laps en route to victory in last year’s event at Eldora Speedway in Rossburg, Ohio. The stakes are higher this year as Bell returns to the half-mile dirt oval as a full-time competitor in the Truck Series and will be looking to collect his second win of 2016 in an effort to strengthen his hold on one of the eight spots for the inaugural Truck Series Chase.

Bell enters Wednesday night’s race having finished inside the top 10 in six of his last seven Truck Series starts this year. He picked up his first Truck Series win of 2016, which was also his first win on pavement in NASCAR’s third division, June 25 at Gateway Motorsports Park in Madison, Ill. Over the last three races the Oklahoma native has moved up five spots in the championship standings to his current position of eighth and he also sits second in the Sunoco Rookie of the Year Standings behind his Kyle Busch Motorsports (KBM) teammate William Byron.

Growing up racing on dirt, the 21-year-old driver lists Eldora as his favorite amongst the many tracks he’s raced at during his blossoming career. He traveled to the famed half-mile dirt track this past weekend to compete in the Kings Royal World of Outlaws Craftsman Sprint Car Series three-day event. Bell started Saturday night’s 40-lap main event from the 14th position, but gave the fans a show as he used the outside line against the wall and advanced up to the runner-up spot on lap 20. Unfortunately, the right rear axle on his car broke as he closed to within four car lengths of the leader and he brushed the Turn 4 wall. After riding the wall momentarily, the car rolled over onto its side and ended his bid for a victory at one of the most prestigious dirt races in the country.

While he wasn’t able to collect the win in the Kings Royal, Bell was victorious in his first trip to Eldora this season. Bell started sixth, quickly made his way to the lead and then outdueled fellow Truck Series regular Rico Abreu to bring home the trophy in the NRA Sprint Invaders portion of the Johnny Appleseed Classic on May 29. In addition to his win at Eldora, the racing vagabond has three other victories racing on dirt this season; March 26 at Atomic Speedway in Chillicothe, Ohio in the Ohio Sprint Car Series, June 3 at Bloomington (Ind.) Speedway in the USAC National Midget Series and July 9 in the 410 Sprint Car feature at Fremont (Ohio) Speedway.

Last year in the Truck Series race at Eldora, the dirt standout put himself on the NASCAR map with a dominating win. This year the stakes will be higher and the talented wheelman is looking to double down in the Eldora Dirt Derby. A win Wednesday night would make Bell one of three drivers with multiple victories this season and all but guarantee him one of eight seats available in the first-ever Truck Series Chase.

Are you looking forward to this week’s Truck Series race at Eldora?
“Eldora is my favorite race track in the whole world. With winning there last year and now having a ton more experience in the trucks, I’ll come into this year’s race with a lot of confidence. Jerry (Baxter, crew chief) has also won there before, so I feel like we will be a really fast combination. Regardless of the outcome, I know this whole No. 4 JBL team is going to go there and have a lot of fun.”

What is the biggest difference for you racing the truck on dirt compared to pavement?
“Racing on dirt I know exactly what feel I’m looking for and I’m going to be way more confident in the feedback that I’m providing Jerry. It’s a win-win situation for both of us because if I’m more confident in what I’m feeling, then he can be more confident in what adjustments he needs to make. That communication between driver and crew chief is one of the biggest things that we’ve been working on this year. On pavement, I’m still learning about the feel that I need from the truck and being able to relay just how loose or how tight my Tundra is. I feel like we are making strides with that communication and it has shown the last few races.”

Do you enjoy the Truck Series race at Eldora?
“It’s probably my favorite race of the year on our schedule and I know that Christopher really loves the place, so our whole team is really looking forward to it. The first couple years we didn’t really know what to expect, but thankfully my brother has some experience dirt racing and he came along with us and was a lot of help. We were able to get a win with Bubba (Darrell Wallace Jr.) a couple years ago when nobody really expected it. Now that we’ve been there a few years, I feel like we are a lot more prepared –especially with little things like bringing shovels and other tools to help get the truck cleaned off during practice and that helps make things go a lot smoother. We’ve got a little added pressure this year having an experienced dirt driver and the guy that won the race last year, but we know if we just go out and execute that this is a race that we can get our second win of the season and secure our Chase spot.”

KBM-007: The No. 4 JBL Racing team will unload “007” for Wednesday’s Aspen Dental Eldora Dirt Derby. The Tundra has collected eight wins in 24 starts since 2011.

The Book on Baxter:
Veteran crew chief Jerry Baxter is in his fourth season atop the pit box for KBM. Since joining KBM, Baxter’s drivers have posted eight wins, three poles, 1218 laps led, 28 top-five and 45 top-10 finishes across 76 starts. The California native spent the 2015 season calling the shots for KBM’s No. 51 team, which collected two wins, 10 top-five and 14 top-10 finishes with drivers Daniel Suarez (12 starts), Matt Tifft (six starts), Kyle Busch (three starts), and Christopher Bell (one start) behind the wheel. In addition to his eight wins at KBM, he boasts one other Truck Series win (Cale Gale, 2012) and one NASCAR XFINITY Series win (David Reutimann, 2007).

Baxter called the shots for Darrell Wallace Jr.’s victory in the 2014 race at Eldora and the duo also produced a seventh-place finish in the inaugural event in 2013.