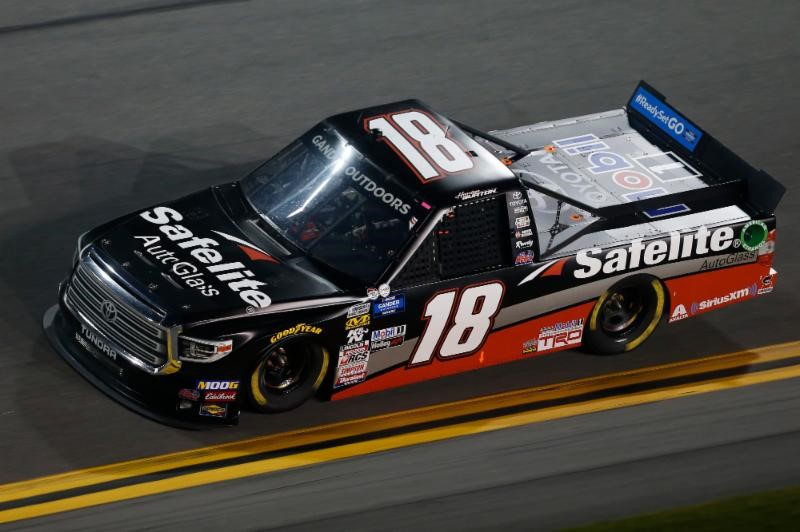 Harrison Burton had an eventful start to his first full-time campaign in the NASCAR Gander Outdoors Truck Series. After posting the eighth fastest time early in the opening practice session at Daytona International Speedway on Thursday afternoon, Burton and the No. 18 Safelite team experienced a motor failure late in the session and were forced to put in the backup motor. Per the rule book, that meant even though they posted the fourth fastest time in Friday afternoon’s qualifying session, they were forced to start at the back of the field for Friday night’s season opening NextEra Energy 250.

Burton’s misfortunes continued during the race when he experienced a flat tire early in the race and went a lap down. After receiving the Lucky Dog and getting back on the lead lap, he experienced a pit-road penalty and lost another lap, but received another Lucky Dog and returned back to the lead lap once again. It appeared as though the resiliency of the Safelite team was going to pay off as the talented youngster was running inside the top five with just over 10 laps to go as he waited to make his move to bring home the victory.

With his KBM teammate Todd Gilliland behind him, Burton had a strong run and maneuvered to the high side of the track attempting to make his way into the top three, but Gilliland’s push from behind came at the wrong angle and resulted in the two trucks caroming into the outside wall. The Safelite Tundra would be able to drive around the track and down pit road, but the damage was to severe to continue and the team was left with a disappointing 18th-place finish.

What happened from your vantage point?

“Me and Todd (Gilliland) had momentum rolling and I was going to make it three-wide around the 12, Gus Dean, and I think Todd just hit me in the left-rear trying to push me up through and I just got loose, loose, loose and then overcorrected and hit the wall. Once you get so light like that, it’s really hard to save them. That’s a shame. We had an up, down, up, down night and I thought we might have a shot to win with our Safelite Tundra at the end. I was going for it. I figured why not. I guess that shows you be a little bit more patient and finish eighth, but I was going for the win. It’s Daytona, right?”

After one race, Burton finds himself 17th in the NGOTS championship standings.

Burton will be back behind the wheel of the No. 18 Safelite AutoGlass Tundra when the Truck Series resumes action Feb. 23 at Atlanta (Ga.) Motor Speedway. Live coverage of the Atlanta 200 begins Saturday at 4:30 p.m. on FS1.–