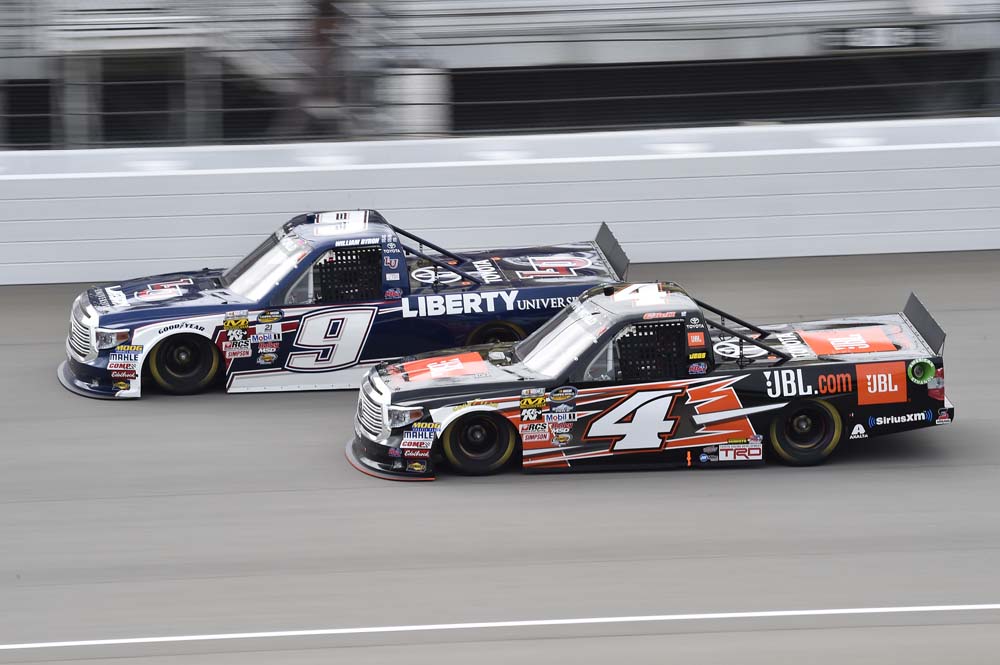 Christopher Bell ran inside the top five for the majority of Saturday’s Careers for Veterans 200 NASCAR Camping World Truck Series race at Michigan International Speedway in Brooklyn, but was relegated to a 24th-place finish after crashing while making a pass for the lead with 25 laps remaining. Bell bobbled as he dove under Cole Custer while entering Turn 3 and spun up the track into the path of Spencer Gallagher. The front of Gallagher’s truck plowed through the back of the JBL Tundra and ended both driver’s days prematurely.

Despite the disappointing finish, Bell locked himself into the eight-driver field for the inaugural Truck Series chase with Brett Moffit’s win. The driver of the No. 4 JBL Tundra is one of six full-time drivers to collect a victory this season and with only two races remaining every full-time competitor with at least one victory is assured a spot in the elimination-style playoffs.

“I’m just really bummed for everybody that works on this JBL Toyota No. 4 team,” Bell said. “We had a really fast Tundra today and I felt like I did a really good job all race just biding my time, I knew I had a really good Tundra. Just trying to take care of it and I got the opportunity there late in the race and still had a lot of race left and probably should have waited a little bit. I had the opportunity, tried to take it and it didn’t work out.”

After rain delayed the start of the race for over two hours, Bell rolled off from the fifth position. He was scored in the third position when the caution clock expired on lap 32. Crew chief Jerry Baxter summoned his driver to pit road where the JBL over-the-wall crew administered a four-tire and fuel stop. The No. 4 Tundra returned to the track scored in the third position for the lap-35 restart.

Bell was scored in the runner-up position when a two-truck accident slowed the field for the second time on lap 45. He visited pit road for a fuel-only stop and was scored in the third spot for the ensuing restart. During the next green-flag run he communicated that the JBL Tundra was “really good, just a little free when tucked up on someone” as he continued to occupy the runner-up spot.

A single-truck accident brought out the fourth caution of the event on lap 63. When pit road opened, the Oklahoma native came down pit road for four fresh tires and fuel. With several teams take just fuel or two tires, Bell was scored in the 14th position when the field went back green on lap 68.

Bell rocketed up the outside lane and in one lap advanced 10 positions. He was scored in the third position when the fifth caution of the event occurred with 30 laps remaining. The field went back green on lap 73 and the JBL Tundra was tucked in behind Custer down the backstretch with 25 laps remaining and tried to use his momentum to take the lead into Turn 3 when the accident happened and ended his day.

Moffitt picked up the first win of his NASCAR Camping World Truck Series career. Timothy Peters finished 0.098 seconds behind his Red Horse Racing teammate in the runner-up position. Daniel Hemric finished third and Bell’s KBM teammate William Byron came home fourth. Cameron Hayley rounded out the top-five. Cody Coughlin had an engine issue while running inside the top 10 late in the race and was relegated to a 20th-place finish.

Bell fell two positions to seventh in the Truck Series championship standings and ended his streak of consecutive top-10 finishes at six.

The 14th race of the 2016 season featured seven cautions for a total of 36 laps. There were 17 lead changes among eight drivers.

Bell will be back behind the wheel of the No. 4 Toyota Tundra when the Truck Series resumes action Sunday, Sept. 4 at Canadian Tire Motorsport Park in Bowmanville, Ontario. Live coverage of the 64-lap event begins with the NCWTS Setup show at 2:30 p.m. ET on Fox Sports 1.