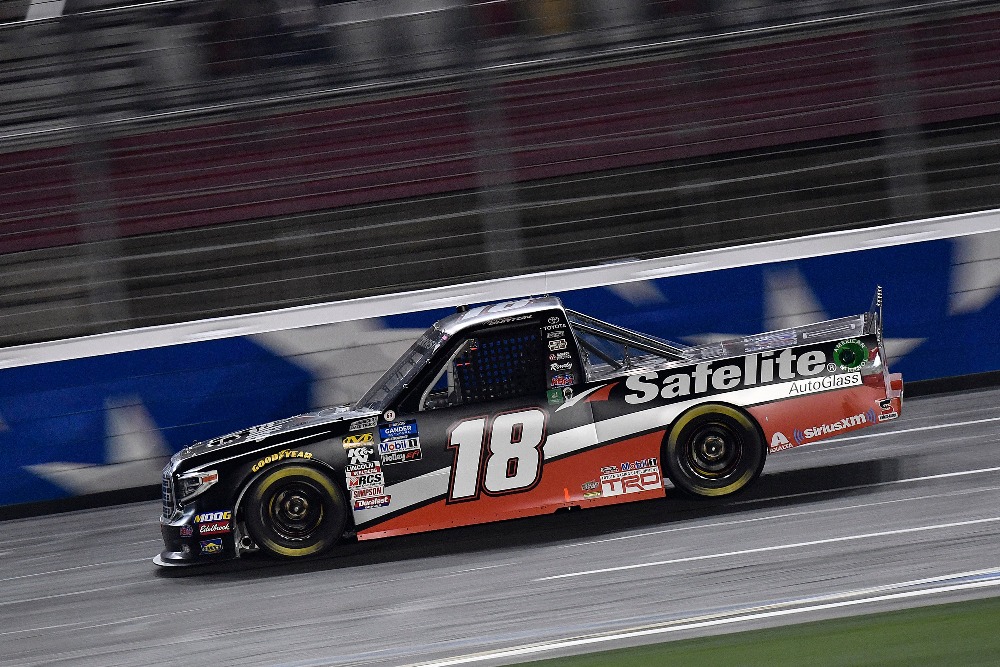 After experiencing handling issues early in Friday night’s N.C. Education Lottery 200 at Charlotte Motor Speedway, Harrison Burton and the No. 18 Safelite AutoGlass team appeared to have battled their way to another top-10 finish until an untimely debris caution slowed the field with seven laps remaining. Burton, who was making his first Gander Trucks start at the 1.5-mile quad-oval located just 10 miles from where he resides, was scored in the seventh position for the restart with three laps remaining, but over the closing laps lost several spots to teams that had put a set of scuffed tires on during the preceding caution and crossed the stripe in the 11th position.

“Felt like the Safelite AutoGlass Toyota Tundra was coming to us at the end of the race – we were passing some trucks running the very top of (turns) 3 and 4 and the bottom of 1 and 2. It’s really hard to pass here and then struggled on restarts, so just disappointed after tonight. I felt like I didn’t do my job, didn’t do my part, but it’s going to motivate us to win races in the future and it’ll make those when we win sweeter. Frustrated, but motivated, and hopefully come out of here with a little bit of fire under us and we’ll go win some races.”

Todd Gilliland, driver of the No. 4 Toyota, finished seventh

Burton fell one position to ninth in the Gander Trucks championship standings. After eight races he finds himself 79 tallies behind points leader Grant Enfinger.

Burton will be back behind the wheel of the No. 18 Safelite AutoGlass Tundra when the NASCAR Gander Outdoors Truck Series resumes action June 7 at Texas Motor Speedway in Fort Worth. Live coverage of the SpeedyCash.com 400 begins Friday at 9 p.m. ET on FS1.