Kyle Busch Powers Through Late-Race Restart to Win at Kansas 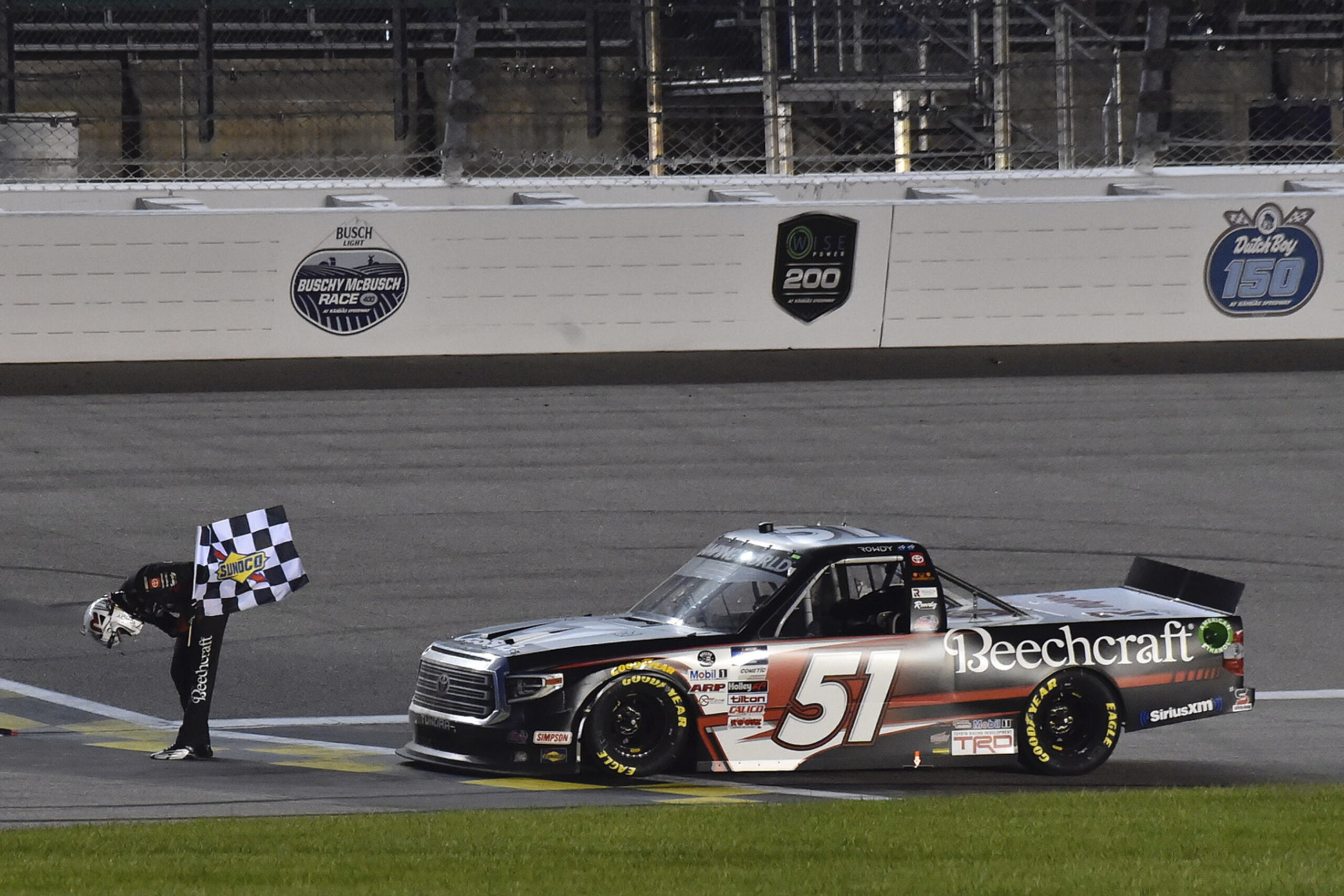 After falling back to fifth on the second to last restart of the evening, Kyle Busch powered his way on the outside lane in the second green-white-checkered attempt to capture his 61st career victory in the NASCAR Camping World Truck Series.

Busch’s win at Kansas is the fifth consecutive victory for Kyle Busch Motorsports (KBM), the longest winning streak in the organization’s history.

How difficult was the final restart with the issues you were feeling in the truck?

“No restarts actually went our way tonight. I was shocked. We definitely missed something, just being able to come up through the gears and get going. It would not go. It’s just slow. Those guys would just swarm us. I think we saw it on one of the restarts with the 4 (John Hunter Nemechek) truck too, he got run over. All in all, though great job by KBM (Kyle Busch Motorsports), everybody at Toyota and TRD (Toyota Racing Development), this Cessna Beechcraft Tundra was awesome tonight. It’s so cool to win here in front of Cessna’s hometown. I’m sure there’s some Cessna folks up in the grandstands tonight cheering us on. We’re appreciative of them and Rowdy Energy and everybody that helps us get here. Incredible Bank, I know they’re here on the backstretch tonight. Brexton races tomorrow, so he better bring home a win like I brought home a win. Hopefully he can do it, hopefully we can do it. I just want to say hi to my family back home.”

Can you take us through the final restart for the win?

“All the restarts were hectic for us. Any time we started on the front row, we would always go backwards. It just would not fire on the restarts for whatever reason. We definitely had a really good, strong, long-run truck. The guys at KBM (Kyle Busch Motorsports), Toyota, TRD (Toyota Racing Development) – this Cessna Beechcraft Tundra was awesome on the long runs. Those restarts were just not for us. We made it work on that last one. The last one, I was fourth in line – got a little bit of a bump from Todd (Gilliland) and got three-wide. I don’t know what else happened after that, but it was just trying to go where they weren’t by that point and get ourselves back up front. I knew when that caution came out, it was definitely not going to be easy. I hated that we saw that caution but put on a heck of a show for all the fans.”

What kind of a statement is this for another victory for Kyle Busch Motorsports?

“I saw the 4 (John Hunter Nemechek) truck on my inside on the restart in one and two and I was like, ‘damn, he’s already here.’ I thought he was going to come with us right there at the finish, but I don’t know what happened to those guys. Overall, just a real strong year for us so far at KBM. This is a pleasure year so far. It’s cool to have John Hunter, we really lean on each other a lot. We’re trying to get Chandler (Smith) up there a little more and get him going a little bit better. The restarts for all of our trucks tonight certainly weren’t going to help him out. We’ve got some work to do. We’re still not the best.”

After seven races, the No. 51 team is tied with the No. 4 team for first in the owner points.

The No. 51 returns to the track with Corey Heim when the NASCAR Camping World Truck Series resumes action on Friday, May 7 at Darlington (S.C.) Raceway. Live coverage will be on FS1, Motor Racing Network and SiriusXM at 7:30 p.m. ET.