Kyle Busch Picks Up First Win of the Season in the No. 51 Cessna Tundra at Las Vegas Motor Speedway 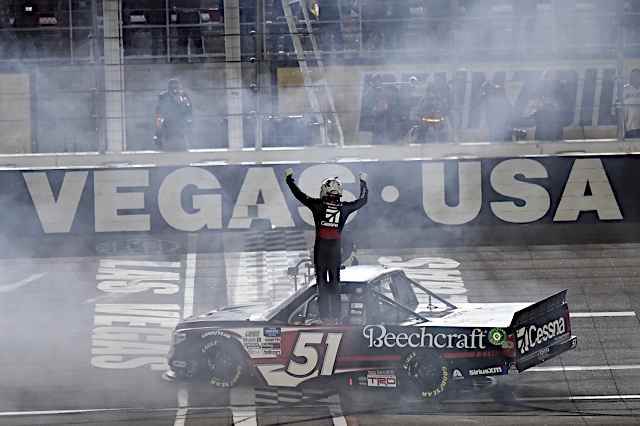 Kyle Busch and the No. 51 Cessna/Beechcraft team put on a dominating performance and led 108 of 134 laps en route to victory in the Strat 200 at Las Vegas Motor Speedway. The No. 51 team posted the 14th-fastest time in one practice on Friday morning, and then Busch qualified his Tundra in the third position in one round of single-vehicle qualifying.

After the green flag fell, Busch wasted no time making his way to the front of the field once the green flag fell. He took the lead on lap 12, with teammate Christian Eckes close behind, then won the first and second stages, only giving the lead up after pit stops. Busch would go on to lead seven times for 108 of 134 laps to earn his 209th career NASCAR National Series win and his 57th victory in 151 Gander Trucks races. Busch has four more scheduled NASCAR Gander RV & Outdoors Truck Series races this season.

What happened on the restarts?

“I don’t know why we just couldn’t fire off on the restarts. We just didn’t have any speed. Once we got about 10 laps in, we started to check away from everybody. This Cessna Tundra was awesome. It had really good long run speed. The guys did a fantastic job. It’s the first win for Danny Stockman with KBM (Kyle Busch Motorsports), so that’s cool to have him on board. For us to have good stuff with Rowdy Manufacturing. All my guys, they just worked their butts off. When we unloaded we weren’t really that close. Worked on it a lot with this tire and we got it a lot better. Kind of showed that with the long run. Overall, thanks to Toyota, TRD, Rowdy Energy keeping us powered here lately, Black Clover, Gander RV & Outdoors, appreciate their support of the series and being here with us. Of course all the fans – pretty cool to have a homecoming win in Vegas like this.”

Does winning the Truck races seem as easy to you as the numbers show with your laps led?

“We certainly work really, really hard. It wasn’t like we unloaded and knew we had a great piece and that we were going to go out there and dominate like that. We work for it, these guys do. All the preparation at the shop comes a long way with Danny (Stockman, crew chief), with Rudy (Fugle, No. 18 crew chief), with Mike Hillman Jr. (No. 4 crew chief). It’s just been really cool to get the equipment going that we have now. Obviously, the talent that we have now. Our groups of guys, the core of them have been together now for a long time. It’s nice to keep some familiarity around KBM (Kyle Busch Motorsports) with the faces that are there and bring in some experience to help facilitate growing the 51 team to a top-notch team.”

Raphael Lessard, driver of the No. 4 Toyota Tundra, finished 30th

Christian Eckes, driver of the No. 18 Toyota Tundra, finished 23rd

The No. 51 team leaves the second race of the season ranked first in the Truck Series Owner’s Championship Standings, 19 markers ahead of second-place.

Owner-driver Kyle Busch will be back behind the wheel of the No. 51 Tundra when the Truck Series returns to action Saturday, March 14 at Atlanta (Ga.) Motor Speedway. Live coverage of the Georgia 200 begins at 1:30 p.m. EST on FS1.