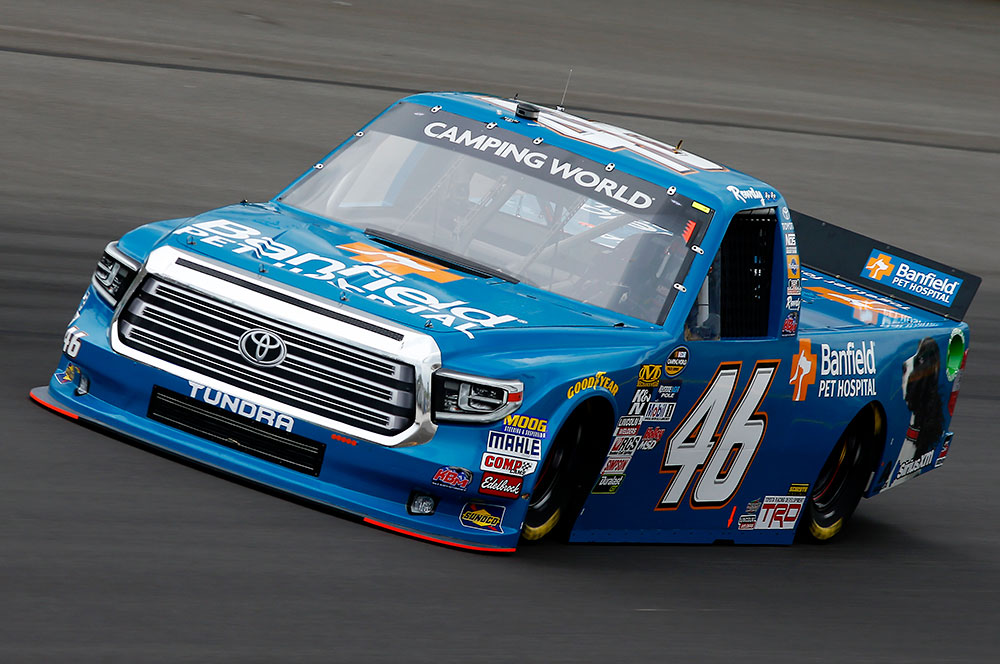 Three Things You Need to Know:

● Kyle Busch, driver of the No. 46 BANFIELD® Pet Hospital Toyota Tundra for Kyle Busch Motorsports (KBM), will make his seventh and final NASCAR Camping World Truck Series start of the 2017 season this weekend in the UNOH 200 at Bristol (Tenn.) Motor Speedway. In six starts this year, Busch has scored two wins – May 12 at Kansas Speedway in Kansas City and May 19 at Charlotte (N.C.) Motor Speedway. Busch has led 285 of the 741 laps (38.4 percent) run during the six races in which he has competed.

● Wednesday night’s Truck Series race is the second of two in which Busch is racing with Banfield on the hood of his Toyota Tundra. Busch finished sixth in the No. 46 Banfield Pet Hospital Toyota Tundra last month while competing at Kentucky Speedway in Sparta.

Are you looking forward to coming back and running the Truck Series race at Bristol?
“Yeah we haven’t run the Truck Series race at Bristol in a couple of years, so I’m looking forward to being able to do that again. It’s my last race in the series this year and we’re running all three this weekend. So, it’s the last chance to try to complete the triple this season. I’m always up for the challenge of racing, running all three series and trying to win. I would really like to try to get Banfield its first win. We have them back on the truck this weekend, so it would be a great way to get things started.”

This is your second Truck Series race with Banfield Pet Hospital on the hood. How special would it be to get the win for them this week?
“Yeah, we kind of missed it with some setup problems at Kentucky last month, but we feel like we figured out what went wrong there. It definitely would be great to get a win for Banfield. We have a lot of their guests coming to watch us, so a win would make that extra special. We usually have our dog Lucy with us, so it’s always nice to know that, if an issue comes up, there is likely a Banfield Pet Hospital not too far away from wherever we are. Banfield also is big into preventive care for our pets, which is important. I think everyone knows we’ve been dog lovers our whole lives – my mom, dad, grandparents. Everyone feels like our pets are our children. I know a lot of NASCAR fans feel the same way about their pets.”
​

Founded in Portland, Oregon in 1955, Banfield is the largest general-veterinary practice in the world. In 2007, Banfield joined the Mars, Inc. family of businesses, and today has more than 975 hospitals across the United States and Puerto Rico. More than 3,500 BANFIELD® veterinarians are committed to providing high-quality veterinary care for three million pets annually. The BANFIELD® brand’s charitable arm, the Banfield Foundation, was established in 2015 as a 501(c)(3) nonprofit organization dedicated to improving the well-being of pets and communities. Press seeking additional information are invited to visit Banfield.com or call the Media Hotline: (888) 355-0595.

BANFIELD® Pet Hospital Unveils 1,000th Hospital
Banfield Pet Hospital celebrated the grand opening of its 1,000th hospital Saturday. Banfield president Brian Garish and members of the local veterinary team participated in a public event to honor the milestone at Banfield’s 1,000th hospital, located in Franklin, Tennessee. Banfield paid tribute to the new hospital by offering free veterinary care to local shelters, as it does ahead of every new hospital opening.