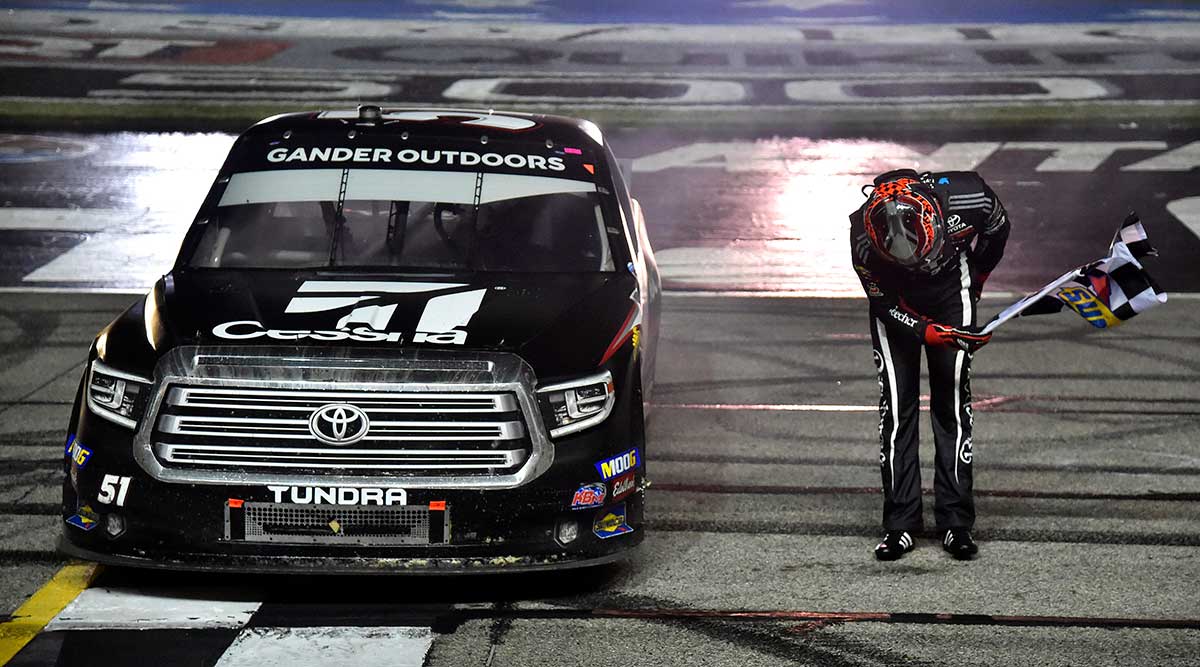 Kyle Busch made history in his first NASCAR Gander Outdoors Truck Series start of the season, picking up his 52nd career series win in the No. 51 Cessna Tundra. This breaks the tie at 51 with Ron Hornaday Jr. and gives Busch the record for most wins in the series. After qualifying was canceled due to inclement weather, the 33-year-old owner-driver began the race in 7th, but quickly took the lead within six laps. Busch persisted through a mysterious vibration and a late race red flag for weather and won both stages in addition to taking the checkered flag for the Ultimate Tailgating 200. 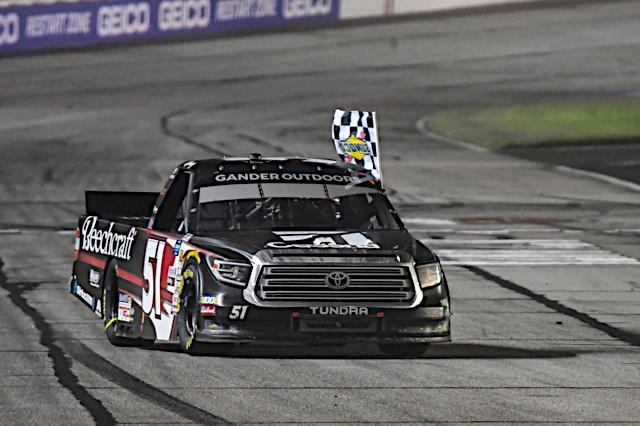 You said you wanted the all-time wins record last year. How sweet is it to be able to check that box?

“It was certainly a big deal for me and a big deal for our team. Rudy (Fugle, crew chief) and these guys, they prepare some awesome trucks as do (Mike) Hillman (Jr.) and Marcus (Richmond). Certainly it’s a lot of fun to be able to come out here and race with my own team and to have Cessna as well as Toyota and TRD support and everybody that gets us to the track. To be able to go chase after records, that’s not what we’re here to do. We’re just here to go out there and compete and win and do what we can and obviously everything that has tallied up over the years is getting us to this point. We just continue to strive to do our best and today it was really really good. The Tundra was awesome. It was flying out there so it felt really good and nice to be able to get it in the first start and to hopefully be able to go five for five this year. That’s what your ultimate goal is, but we’ll see what all we can get done.”

Why are you so good at these restarts where you can just blow by them like a video game?

“I don’t know. I really don’t. I know last year (Brett) Moffitt was really good. Him and I we battled at Vegas the whole race and he was really good there. He was a guy that I had to race with to try to beat for the win. I didn’t see him tonight much and then of course Johnny (Sauter) is one of the best here each and every year in this season. Now, being back at ThorSport Racing, I thought that would kind of hinder him a little bit, but there he was tonight all night long being right there in second place and leading some. He passed us for the lead. Really I hope it works for me on the Cup side as well too because those Cup cars drive a lot like these trucks and we’ll see how that happens and what we can do to make myself perform on Sundays.”

Todd Gilliland, driver of the No. 4 Toyota, finished 9th

Harrison Burton, driver of the No. 18 Toyota, finished 8th

The No. 51 team leaves the second race of the season ranked third in the Truck Series Owner’s Championship Standings, eight points out of first.

Team owner Kyle Busch will be behind the wheel of the No. 51 Cessna Tundra when the Truck Series returns to action Friday, March 1 at Las Vegas Motor Speedway in Las Vegas, Nev. Live coverage of the Strat 200 begins at 9:00 p.m. EST on FS1.