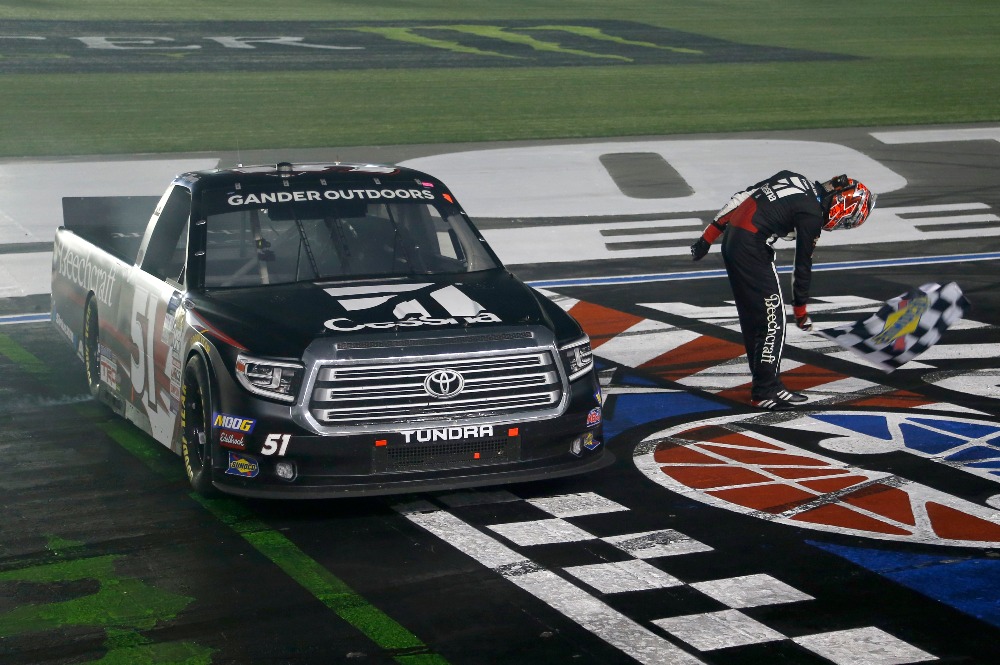 Kyle Busch and the No. 51 Cessna/Beechcraft team laid down another dominating performance at Charlotte Motor Speedway in the N.C. Education Lottery 200. In his fifth and final NASCAR Gander Outdoors Truck Series start of the season, the owner-driver earned his fifth win, going five-for-five on the season. The 51 team posted the fourth and 10th-fastest times in two practices respectively on Friday morning, and then Busch qualified his Tundra in the eighth position in one round of single-vehicle qualifying.

After a hot and sticky day of practice and qualifying, the sun set over the famed 1.5-mile oval, and Busch wasted no time making his way to the front of the field once the green flag fell. He took the lead on lap five, from teammate Todd Gilliland, but gave it up a few laps before the end of the first stage to hit pit road for a four tire stop. Busch would go on to lead five times for 102 of 134 laps, winning the second stage and overall race to earn his 205th career NASCAR National Series win and his 56th victory in 150 Gander Trucks races.

How would you describe the night?

“I mean our truck was really, really good. These guys did a great job preparing such a fast Tundra for me. I want to thank Cessna, Beechcraft, of course Toyota, TRD, Rowdy Manufacturing. It takes a whole group effort and Rudy (Fugle, crew chief) and these guys are awesome at what they do and give me great pieces each and every time we come out here. We don’t unload – we have not ever this year, we haven’t unloaded great but we’ve really worked on our stuff and improved it through practice and even into the race. There at the end that last restart – I didn’t want to have that last restart there. I knew being on older tires was going to be a handful for me. It looked like it was for a couple of the other guys. I just didn’t get a very good restart, but then I was still able to hold them off thankfully.”

Five for five for you. Is that a personal achievement? Something you can brag about?

“Sure. All of those things. I wouldn’t say necessarily brag about it, but it’s something we set out to do a couple of years ago. We just haven’t been able to accomplish it, but with Rudy (Fugle, crew chief) here this year, we had some really fast Tundras and we tuned on them really well in order to get ourselves in position each time. Again, we had fast pit stops. Everything had to come together and everything had to align to be able to do what we did here this year with going five for five. It feels good. We won the last race I guess I was in last year too, so it’s six-in-a-row, right? It’d be nice to have more opportunities to run more races I guess. For me anyways. But probably not for anybody else. That’s why I’m only allowed five.”

Todd Gilliland, driver of the No. 4 Toyota Tundra, finished 7th

The No. 51 team leaves the eighth race of the season ranked first in the Truck Series Owner’s Championship Standings, 35 markers ahead of second-place.

Veteran driver Greg Biffle will be behind the wheel of the No. 51 Tundra when the Truck Series returns to action Friday, June 7 at Texas Motor Speedway in Fort Worth. Live coverage of the Rattlesnake 400 begins at 9:00 p.m. EST on FS1.