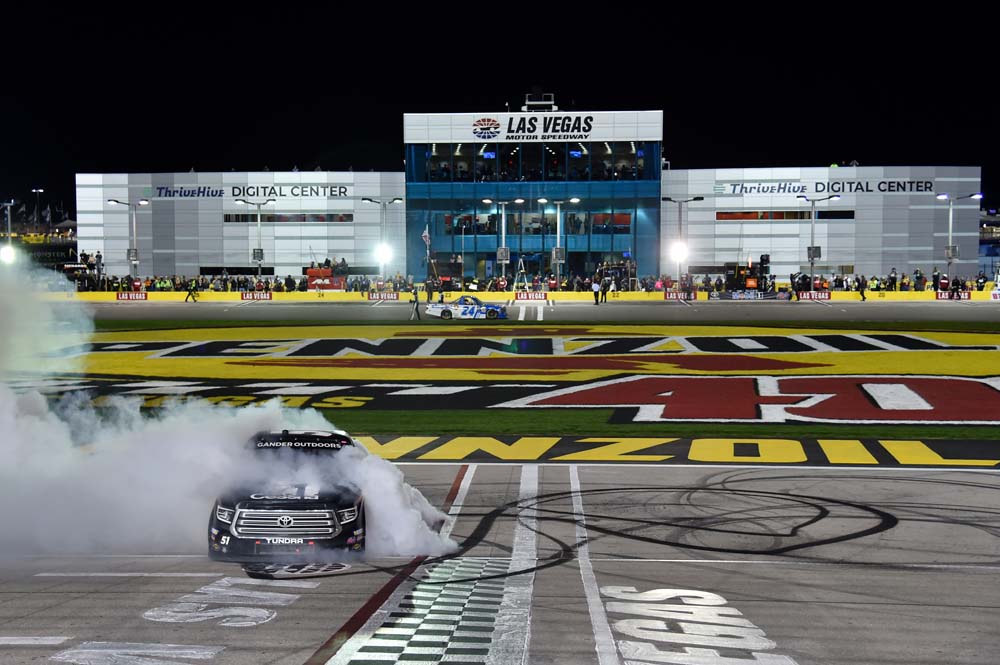 In his second NASCAR Gander Outdoors Truck Series start of the season, Las Vegas native, Kyle Busch, earned his 53rd series win. Busch led 110 of the 134 laps, en route to a dominating victory. The owner-driver qualified his No. 51 Cessna Tundra on the pole and then won each stage and the overall victory.

How was your truck tonight?

“It was just tight, we fought it in practice a little bit and we worked on it an awful lot to make it better. Rudy (Fugle, crew chief) and these guys did an amazing job on this Cessna Tundra, it was really, really fast. Just kept working on it all night long, every pit stop we would come in and we would work on it. Certainly want to thank Toyota and TRD, Rowdy Manufacturing, KBM and everyone at the shop, they do an amazing job and build really fast Tundras. Thank Monster Energy, Incredible Bank, Black Clover, DVX Sunglasses, of course the fans – it’s cool to win here in your hometown being from Las Vegas. Starting off the triple weekend, hopefully we can keep it going.”

The No. 51 team leaves the second race of the season ranked first in the Truck Series Owner’s Championship Standings.

Team owner Kyle Busch will be behind the wheel of the No. 51 Cessna Tundra when the Truck Series returns to action Saturday, March 23 at Martinsville Speedway in Martinsville, Va. Live coverage of the NGOTS 250 begins at 2:00 p.m. EST on FOX.