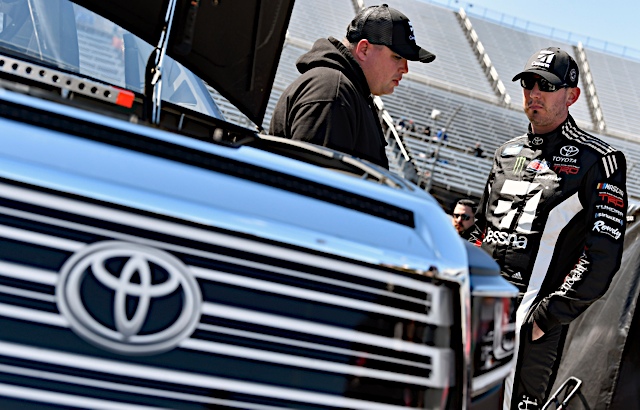 Do you have a target career-wins total for the Truck Series?

“Yes and no. I’m only allowed five (races) a year so it’s going to be tough to accumulate too many in the foreseeable future. Just keep doing what we do. If we can win four or five of the five each and every year, then it’ll hopefully add up over the course of the next 10 years or whatever. That’ll put you right around 100.”

You have Texas and Charlotte left this year in the Truck Series. Do you have a good chance to make it five for five?

“Yes, obviously working with Rudy (Fugle, crew chief) – working with any of our crew chiefs, they’re all really good. I worked with (Mike) Hillman (Jr.) last year and won races. I’ve worked with Marcus (Richmond) before that and won races. Jerry Baxter, every one of our guys that’s been at KBM. Rudy since ’13. I’d like to think that Texas is a good place. We saw how fast Todd (Gilliland) was there last year. He was really, really good. I think that our guys have a good baseline. We’ll go to Texas and work on our stuff and try to improve it in practice. The same thing as we always do and put a good piece out there for the race. Charlotte is always one of my best tracks, favorite tracks. I enjoy running there with the trucks especially. There’s a good opportunity to be able to go five for five.”

KBM-055: The No. 51 Cessna team has prepared chassis KBM-055 for Friday’s Vankor 350 at Texas Motor Speedway. This machine was last piloted by Kyle Busch to the victory at Atlanta (Ga.) Motor Speedway in February. Prior to that, the vehicle had been raced only once by Noah Gragson in the season finale at Homestead-Miami (Fla.) Speedway in 2018, where he finished third.